It’s easy for Samuel Taggart ’14 to imagine his version of the perfect day.

It begins on a big mountain covered in a couple feet of fresh powder. “I’m with a group of friends, feeling each other’s good energy and vibing off of that, and having this opportunity to be out in these beautiful spaces,” he says.

After combining lots of persistence and a little luck, Taggart, 30, now finds himself enjoying plenty of perfect days as the editor-in-chief of FREESKIER magazine. He travels the world, skiing, taking photos, and writing stories.

“When I see my words and photographs together in a story, I still get emotional,” he says. “That was the dream and I’m doing it.” 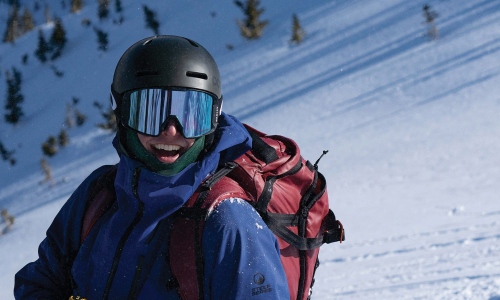 Taggart grew up in Summit, New Jersey. He learned to ski during the annual family vacation to Colorado and fell in love with gliding down mountains. At Denison, the English major was arts and life editor of The Denisonian. “I only skied once while I was in Ohio,” he says.

After graduation, Taggart worked in sales for Discovery Communications in Manhattan, and began skiing regularly again. A family friend (Michael Radutzky, a senior producer at 60 Minutes) asked Taggart to describe his dream job: “My response was, I’d like to travel, to write and tell stories, take photos and, if I could ski too, that would be perfect.”

This set his current trajectory in motion. Taggart applied for and was awarded a six-month internship at Powder, a since-defunct ski magazine based in San Diego. This was followed by a winter season at Monarch Mountain near Salida, Colorado, where Taggart parked cars — and skied every day. He was then hired as digital editor of Denver-based FREESKIER, was promoted to managing editor, then editor-in-chief in 2021. “It has been a bit of a trial by fire,” he says. “You’re never quite ready for what’s thrown at you, but you learn to figure it out.”

While he still loves to write and take photographs, Taggart now enjoys working with contributors to FREESKIER. “I really like stepping back and being more of a curator than a doer, and giving these talented people an opportunity to shine.”