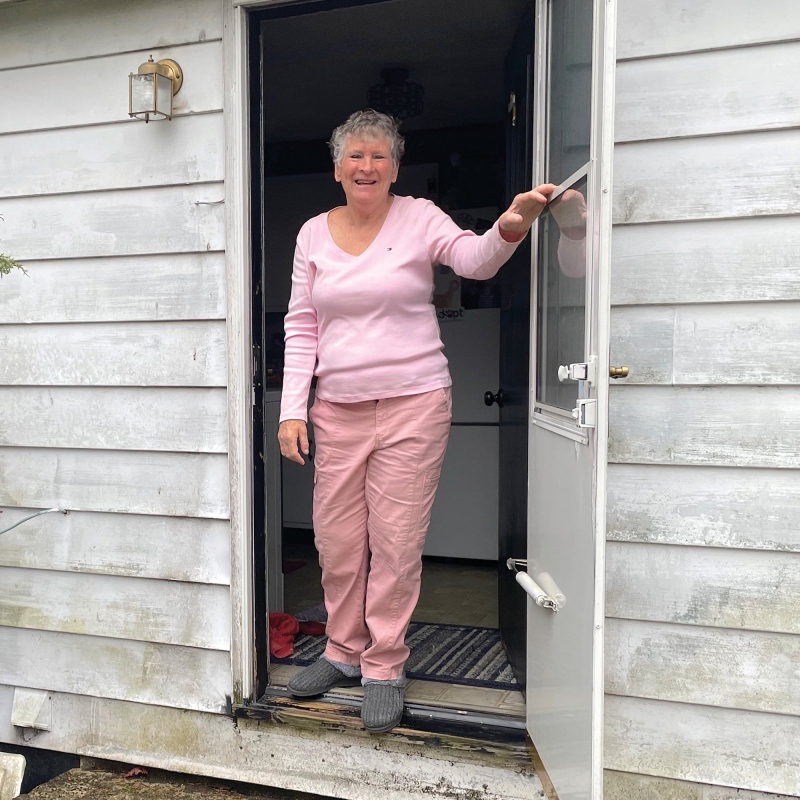 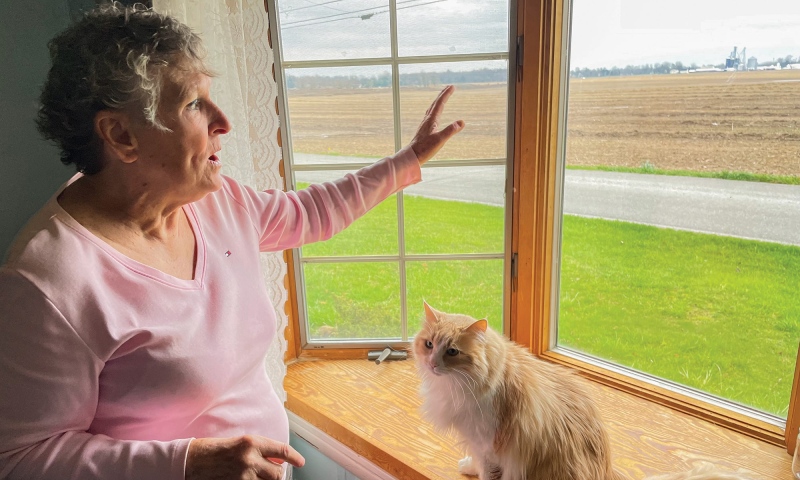 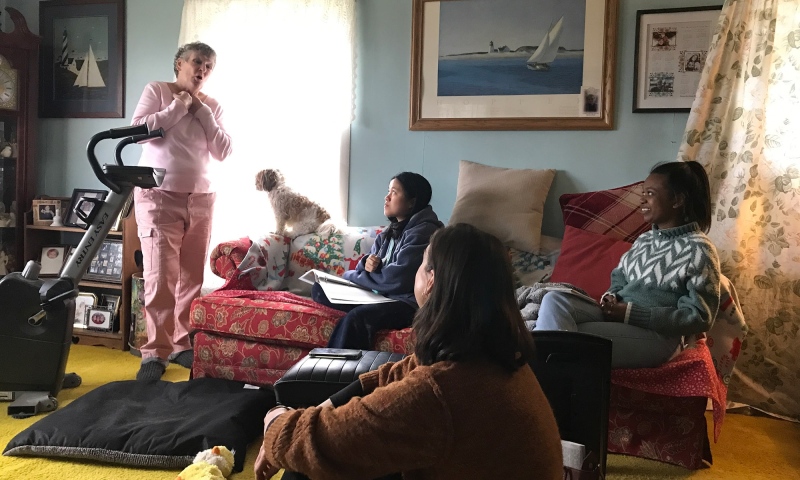 1. Barbara Vanhoose, 73, greets Denison journalists at her back door in rural Licking County.

2. Barbara at the bay window

3. BEARING WITNESS: Standing in her living room, Vanhoose shares her feelings about the Intel project with (from left) Pol Le ’25, Molly Born, and Faith Boirard ’25.

“We’re about four or five minutes away,” says Molly Born, easing her car down a rural Licking County country road, about a dozen miles west of Granville, Ohio. “So keep your eyes peeled for Barbara’s.”

Faith Boirard and Pol Le peer through fogged windows. It’s a frigid April afternoon, and gray clouds hang heavy in the sky. Born, a West Virginia-based journalist and Denison’s 2022-23 Mellon Fellow for Journalism, rolls past a series of dark blue signs, past a house half collapsed by a bulldozer, past a new mound of soil. When an aging white farmhouse appears on her right, she turns into a dirt driveway and shuts off the car.

“Do you have any questions for me as you go in, or are you feeling pretty good?” she asks the first-year students.

“Good,” echo Boirard and Le, as they head into the home of Barbara Vanhoose, where they curl up on a floral living room couch and spend an hour listening to a master storyteller share what it’s like to have one of the world’s largest technology companies moving into the neighborhood.

“I’m not against progress,” says Vanhoose, 73, looking out at the freshly turned land across the street, now clear of the crops and trees that have been framed by her window for decades. “I’m not against success. But I think people need to (remember) that people live out here.”

Ever since Intel announced its plans in early 2022 to build a $20 billion semiconductor plant in Licking County’s Jersey Township, things have been changing quickly in this quiet central Ohio community. The development promises to wildly transform a large patch of countryside, swapping farms for factories and creating thousands of much-needed jobs for the region. Nearby residents have both cheered and jeered the landmark investment and what it will mean to their individual and collective lifestyles.

It’s a big news story, to say the least. Too big, really, for any single news outlet to cover, and too complex, too nuanced, to paint with sweeping strokes. That’s where Born and Boirard and Le — along with several others from The Reporting Project at Denison University — have stepped in to offer a deep local look into the story.

In 2020 Denison approved a new journalism major and minor and, separately, launched The Reporting Project, the manifestation of an idea long volleyed between visiting assistant English and journalism professor Doug Swift and Jack Shuler, the director of journalism at the college. The news site — supported in part by the “Writing in Place” initiative, a grant from The Andrew W. Mellon Foundation — addressed two pressing goals for Denison and the community: creating a space to share stellar student and faculty storytelling while also helping fill the local news gap left behind by shrinking news organizations.

“It’s always been a bit of us dreaming what we would want to have and us thinking about what it could actually be now and in the moment,” Swift says. “We look out on the media landscape today and see resources for local newspapers getting smaller and smaller and the need for more local journalists continuing to grow.”

“Rather than running away from it, we kind of jumped right into it,” Shuler says. “It seems to me like a natural fit for a small liberal arts college. We want journalists who can see the world from a lot of different perspectives; we want journalists who can talk to lots of different kinds of people; we want people who know how to research and read about things that they know nothing about and then actually understand them and then be able to talk about them.” 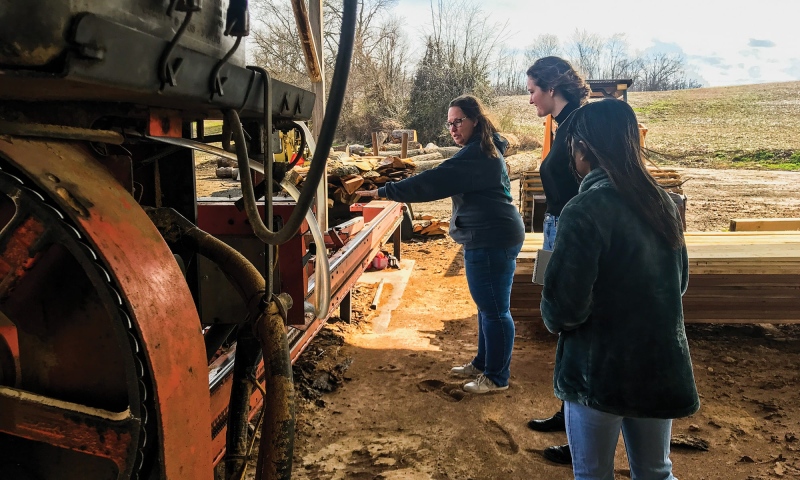 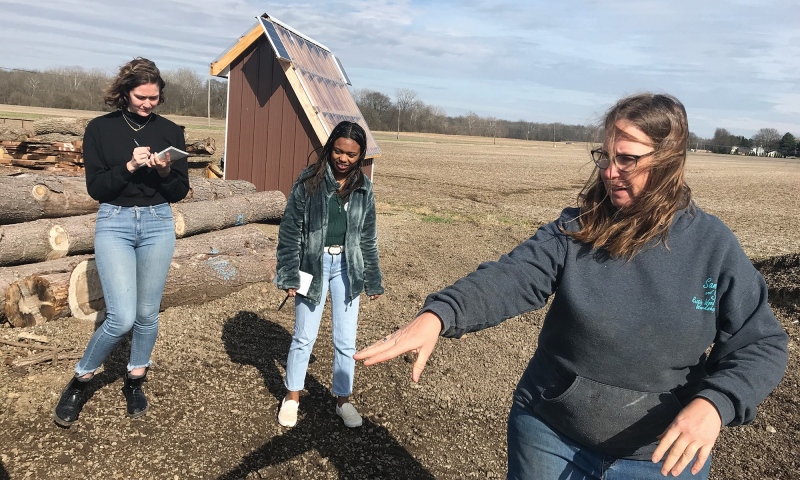 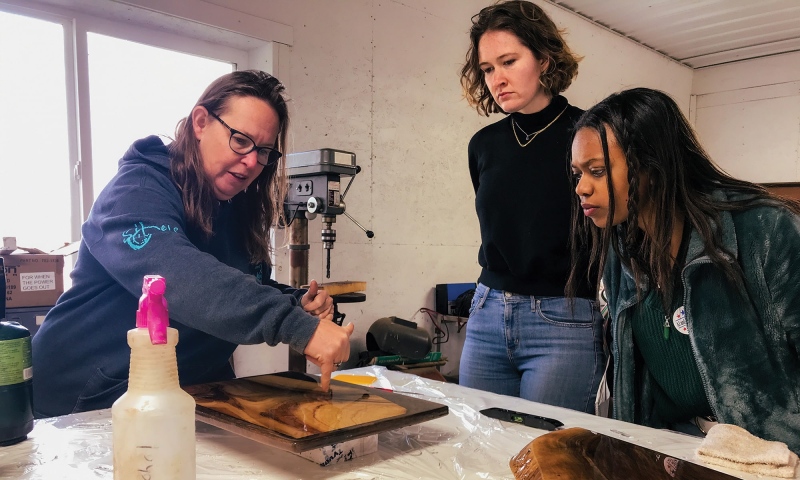 ON ASSIGNMENT: Boirard and Jen Clancey ’23 tour Sand and Sip Rustic Wood Workshop in Johnstown, Ohio, with one of its owners, Amy Kent.

The site took root in 2021 with a series of written and audio stories called Black Lives in Licking County, a collaboration among The Reporting Project, the NAACP of Licking County, and the local newspaper, the Newark Advocate. Student reporters immersed themselves in worship services and protests and joined a group of women at Cedar Hill Cemetery celebrating the life of an overlooked Black author, Gertrude Dorsey Brown.

“We did four stories over the month of February 2021, and it was a lot of work just to pull those off each week,” Shuler says. “But I saw that as an amazing opportunity to see what we could do. The students were really into it, and we knew that it was the kind of journalism that we want to produce — rather than telling a community what they want, actually going into the community and asking them what they want, and collaborating with them to tell stories.”

And so when Intel announced in January 2022 that it would be investing in two new computer chip factories on 1,000 acres in Licking County — “monumental news for the state of Ohio,” Gov. Mike DeWine declared — it felt only natural to dive into what those headlines meant for people within that community. By then, The Reporting Project had gained two additional leaders: Born, the Denisonian advisor whose reporting resume includes a six-year stint at the Pittsburgh Post-Gazette, and former Columbus Dispatch editor Alan Miller, who joined Denison’s journalism program after teaching part-time at the college for more than 20 years. Both were eager to load students into their cars to explore the development site just a few miles down the road.

“That’s the thing about journalism, right?” Shuler says. “We can do as much as we want in a classroom, but really you learn by doing and by exploring. And I think that’s what The Reporting Project does best.”

Some days that’s meant shuffling through the mustard yellow carpet in Vanhoose’s living room, and other days it’s meant grabbing coffee with a local real estate agent to find out how Intel’s plans are already elevating nearby housing prices. One afternoon, it meant a trip to the Sand and Sip Rustic Wood Workshop on Duncan Plains Road, where Miller, Boirard, and junior Jen Clancey stood in the chill of a century-old barn asking its owner what they thought of the Intel development. (“Might as well accept it and move on,” was the reply.)

“I love the way our students are getting in the middle of it, not looking for good guys or bad guys,” Swift says. “Our journalism is about connection with the community.”

“I really like to get off The Hill and learn more about the community that we are actually in,” says Clancey ’23, a psychology major with a concentration in narrative journalism. “I feel like it just connected me to a bigger purpose of being here. I’ll talk to my friends, and they’ll say, ‘What did you do today?’ and I say I went to a local woodworking business in Johnstown, Ohio, and I feel like it adds a bit more meaning to my day.”

It gives added meaning to her stories as well. A key intention of The Reporting Project is to give standout stories an audience that goes well beyond the classroom. Stories that appear on the site have been picked up and splashed across the pages of the Newark Advocate and The Columbus Dispatch.

“I tell students both in class and through The Reporting Project that there is no good reason I should be the only one who sees your good work,” says Miller, who will continue focusing on Intel coverage as part of a course he’s teaching in the fall of 2022. “It frightens some of them, to be honest. When you have an inkling that 100,000 people or more might be reading your story, then the stakes are much higher, and you have to get it right. I love that accountability aspect of our goal to see students published. But I also love seeing their work … what a thrill that is to have that byline, and it’s also great for their resume.”

It also makes journalism real — quickly — for The Reporting Project’s interns. This is not an academic exercise in interviewing or a lesson in inverted pyramid structure. This is knocking on the doors of strangers and asking if you might come in — and then finding and sharing the meaning in what they tell you.

“When I was coming into Denison, I wanted to make sure, regardless of what capacity, I was connecting with the community and giving back in some way,” says Boirard ’25, who grew up in North Attleboro, Massachusetts. “It’s really nice that we get to do this — we can connect with the community and hopefully give back with some good writing, some good documentation.”

For Pol Le ’25, of Vietnam, who joined The Reporting Project in 2021 as a first-year student majoring in economics and journalism, it’s been a rewarding experience, if slightly nerve-wracking. The day she walked into Barbara Vanhoose’s house, she was entranced by the woman’s energy, by the way she wove together tales of wildlife and ghosts and first meeting her husband, and Le, pretzel-legged on the couch, her notebook spread across her lap, embraced the moment of living in someone else’s life.

“At first it was scary, of course,” Le says of approaching people for a story. “But the more I reach out, the easier it becomes. I realize people are really willing to talk to me — they have important stories to share.

“To an international student like me, it’s really an honor. It’s hard to describe it. Every time I go out, I feel like I’m going to a new world. I don’t know who I’m going to talk to, I don’t know what will happen, but people will tell me their stories and I can expand my world in a new way.” 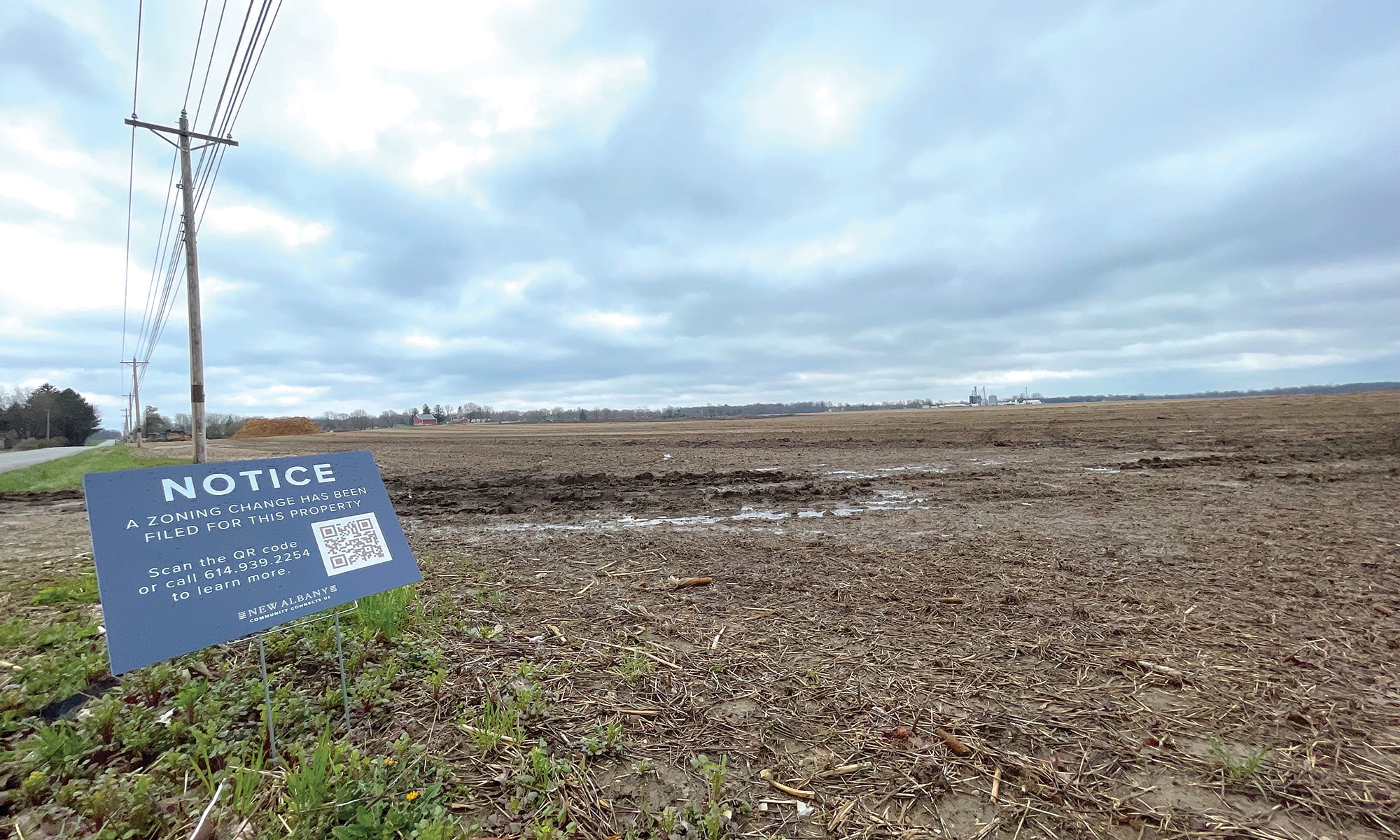