She wakes in darkness, thrashing, her nightgown twisted, the damp sheets sticking to her skin. Pain radiates through her body like a high-pitched drone. She struggles to sit but finds that she cannot. She is dying. She lies back and tries to slow her breath, panic cinching tight across her chest. she is dying. Where is Esther? She is afraid to go back to sleep. A handful of patience is worth a bushel of brains, her father used to say. Patience has never been her strength.

Shh, schatzi, her father always said, brushing the hair back from her forehead.

Then the story would begin. Once there was a girl and a boy and their father who lived on Nádražni Street. Then the world collapsed into a heap of bones.

Oh, this worn-out story, unraveling, moth-eaten, full of holes. She can see him now, her brother Hugo, as clearly as if he were standing before her. He is leaning over the table, his jaw shaded with pale stubble, his eyes hard and bright. Light fractures off the chandelier. Their father sighs blue smoke. In Austria the situation is very bad. Jews have been arrested, beaten, fired from their jobs, property seized. Even here in Moravská Ostrava, the SdP have been demonstrating in the streets. Black- and red-striped party flags fly from all the windows on the Marktplatz. Her father has been writing to business acquaintances and distant relatives in Antwerp, Trondheim, Chicago, Leeds. His middle finger is stained blue with ink.

Hugo talks of olive trees, orange groves, Zionist pioneers. Their father grinds the stub of his cigarette onto his plate. “And you would do what in Palestine, exactly?”

Lonia doesn’t want to go anywhere. She likes her room, her school, her friends. The windows of the flat have been thrown open to the sooty August heat. The air that enters is hot as exhaust.

Beyond the Vítkovice smokestacks, the sun is red. She has seen photographs of Palestine: dusty streets and Arabs, donkeys, sand, old stones. She doesn’t want to leave. She doesn’t want to leave her grandparents, her mother’s gravesite, her friends. She can’t imagine being anywhere but here. She leans her head against her father’s shoulder. He lights another cigarette.

“Beneš will not give in to the Reich,” he says.

Across the table, Hugo’s jaw is set. Lonia knows that look. The door to his bedroom slams. 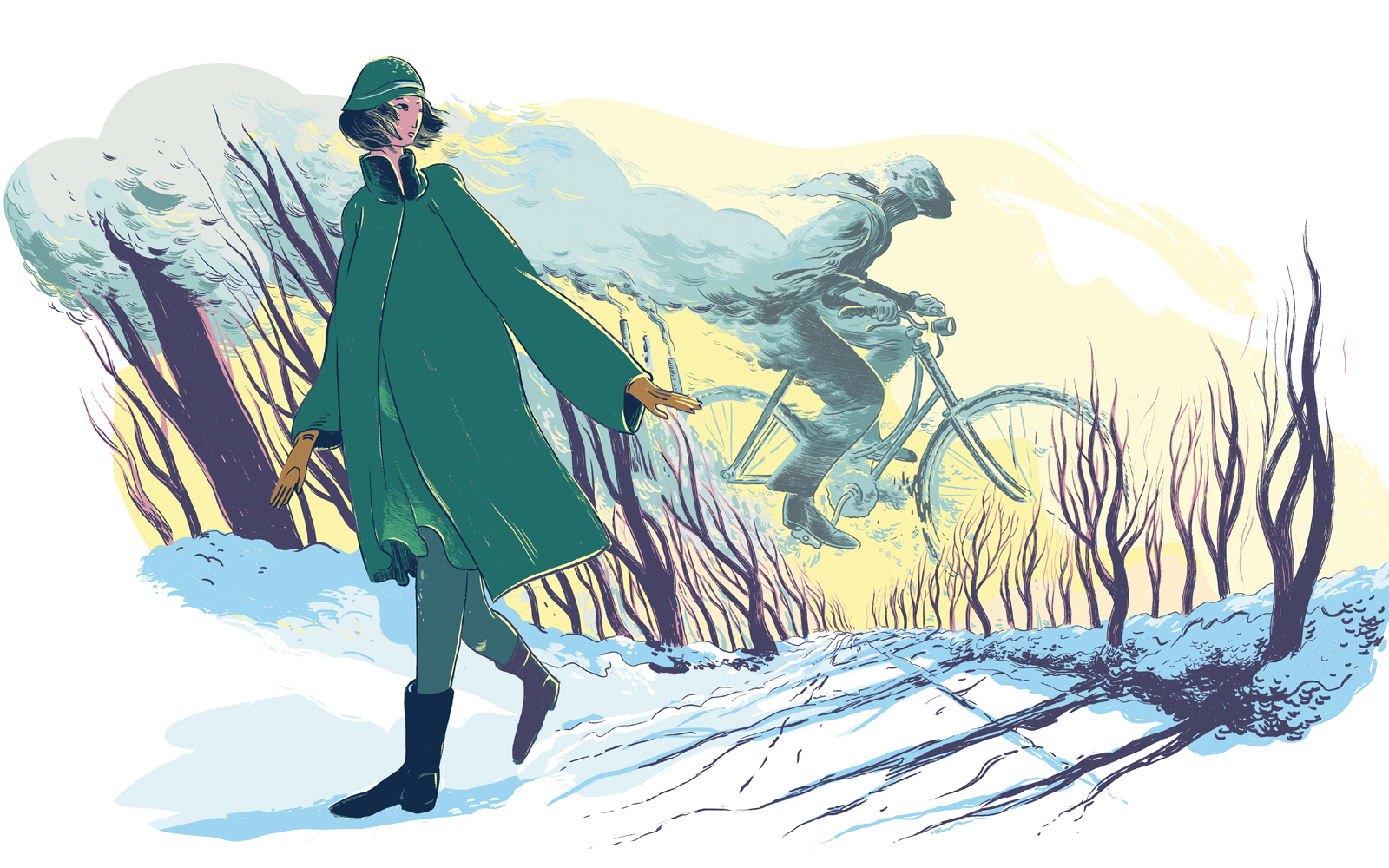 EVERYONE IS TALKING ABOUT LEAVING.... THERE IS WILD SPECULATION ABOUT THE POSSIBILITY OF WAITING THINGS OUT IN PLACES LONIA HAS NEVER HEARD OF: SUMATRA, THE DOMINICAN REPUBLIC, UGANDA, BORNEO. NO ONE ASKS LONIA WHERE SHE WANTS TO GO.

Hugo and her father argue. The wireless sits between them on the table, a constant drone. Her father expects to be called up. There is talk of evacuating her and Hugo to the countryside. Lonia wonders why men have to fight. Without men there would be no war, her best friend Eva says. Lonia has read about the Amazons, so she knows this isn’t true. Still, she is certain women would do things differently. In any case, politics bore her. She is more interested in Hugo’s friend Jiri, who loans her books of poetry and brings her wildflowers stuffed in pickle jars.

In the other room, her father is shouting into the telephone. Her Opa’s health is weak and he has been confined to bed for weeks. She hears the words doctors, money, blow over, leave.

Someday, she decides, she will live in a villa like her grandparents’, surrounded by climbing roses and lilacs and apricot trees snowing blossoms in the spring. She will have two tall wolfhounds, loads of children, a bright red autocar. She will wear a hat tipped to a fashionable angle on her head, a fox stole, a diamond ring. In her imagination, the future is like the dioramas in the natural history museum: tiny, perfect, fake.

Hugo brings home copies of Der Judenstaat and Altneuland, pamphlets, Hebrew primers. He leaves them strewn about the flat. Lonia and her father step over them, like muddy puddles in the street.

By the time the first snow falls in late December, the borders have snapped shut like traps. The Sudetenland is lost; Beneš has been betrayed. When her grandfather dies, they are not permitted to cross the border to Opava to attend the funeral. Her father finally manages to bring his mother out to live with them, against her will. She spends her days sitting at the window, her eyes watery and unfocused, her speech confused. Barred from practicing law, her father spends the days at home closed in his study, listening to the radio, writing letter after letter to bank officials and immigration authorities. He is growing thinner, brittle, pale as the parchment on which he writes.

Hugo’s place at university has been revoked. He manages to find a job in the accounting office at the steelworks in Vítkovice. He rides his bicycle to work, hunched inside his overcoat, zigzagging through the snow. He leaves early in the morning, comes home late. Lonia misses him, as if he has already gone for good. Lonia walks toward the river through the park where she and Hugo used to play when they were kids. Dirty sludge laps the curbs, seeps through the soles of her boots. Even before the snow stops falling, it is scabbed with soot. A grid of trolley lines scrapes the sky, gray with ash from the coking plants and the steel mills and the deep mines burning coal. Across the river rises the Ema mine dump: a huge, hot heap of slag. The homeless huddle there for warmth.

Everyone is talking about leaving. Somehow Jiri has managed to obtain an immigration permit for Palestine. There is wild speculation about the possibility of waiting things out in places Lonia has never heard of: Sumatra, the Dominican Republic, Uganda, Borneo.

No one asks Lonia where she wants to go.

She feels the great wheels grinding all around her, their heavy iron spokes.

It is Hugo’s voice she hears now, calling to her from down the street. He is cycling toward her up Nádražni, the tails of his overcoat flapping out behind him like wings. Light snow floats in the nimbus of the streetlamps. He catches up to her at the bottom of the steps, swings his leg over the seat. He is all angles, her brother, pale skin stretched over long bones. He pulls an aerogram from his pocket.

“Look, a letter came from Jiri.”
“Are you still going to those meetings?”
“He’s living on a kibbutz in the Galilee. He’s changing his name to Yigal!”
“It’s freezing, Hugo. I’m going in.”

His hand is on her arm. This is how it always is between them, this push and pull: his stubborn tug, her giving in.

“I’m going, Lonia. I don’t care what Papa says.”
She twists her arm away. “And you’ll get there how?”
“There are ways.”
“You’ll just get yourself killed.” 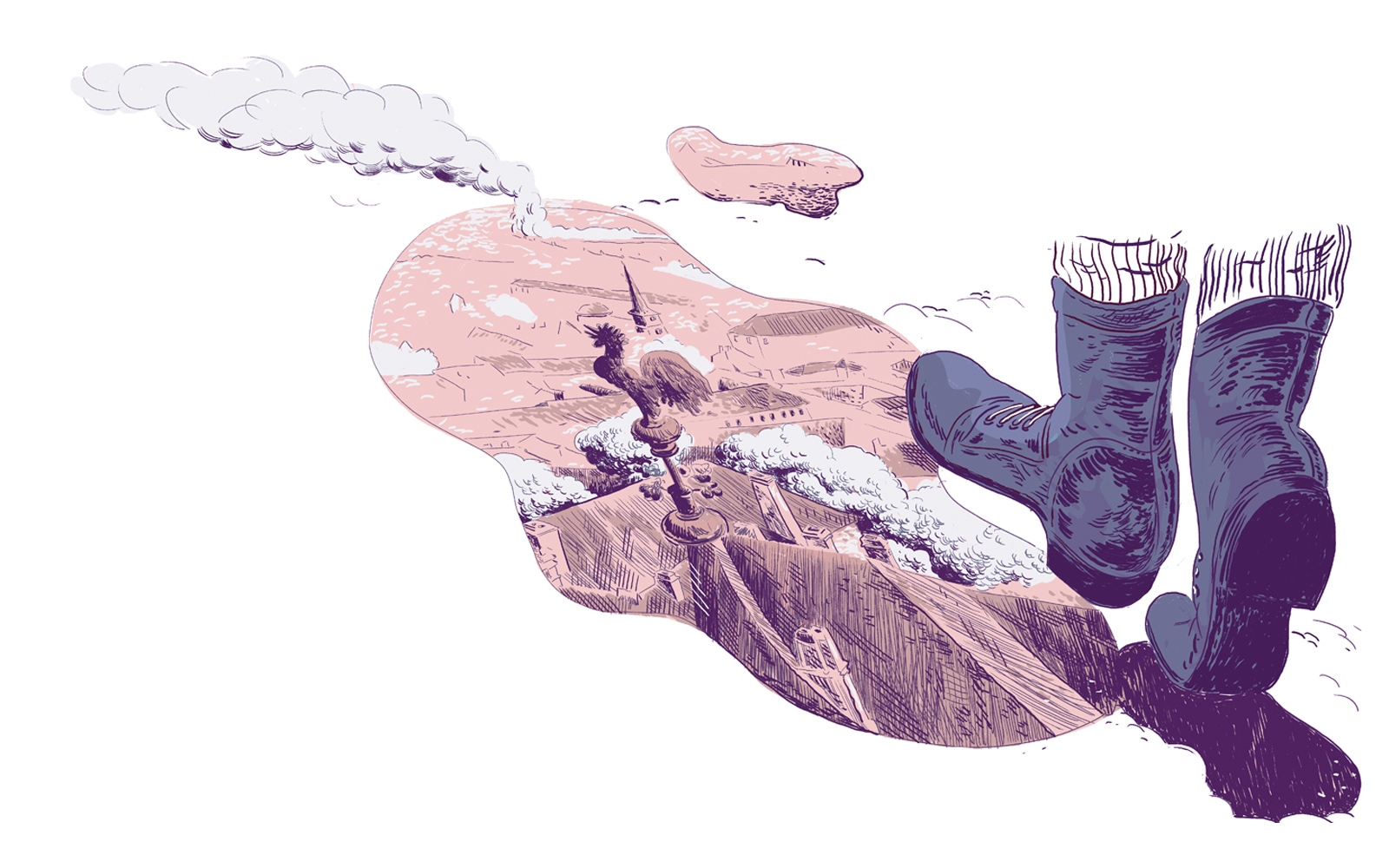 The tram comes screeching around the curve, faces blurred at windows fogged with breath. She is seventeen years old; she cannot imagine another life.

She pulls the heavy front door open and holds it as Hugo hauls his bike over the threshold steps and in. Her toes have gone numb with cold. Her father will not let Hugo go, she thinks. Now that her grandmother has come to live with them, her father has let his letter-writing campaign lapse. The doctors have made it clear that her Oma, already vague with grief, will not survive another move. Her father paces back and forth across his study like a big cat in a cage. He sighs blue swirls of smoke. He says, This too shall pass, but he doesn’t sound convinced.

Lonia trudges up the steep flights of stairs. From the drawer of her dressing table, she takes out the book of Rilke’s poems Jiri loaned her, a lovely edition bound in green morocco, stamped with gold. Now she knows she’ll never give it back.

The Wehrmacht rolls into Ostrava at dusk on March 13, 1939, a motorcycle cavalcade followed by a rumbling procession of armored cars and tanks and anti-aircraft guns. Lonia’s father stands over the radio, desperately twisting the dial between snatches of shortwave static from Radio Moscow and the BBC. Out the windows of the flat, the sun flares red.

Lonia goes into her room and lies down on the bed without bothering to remove her shoes. What would happen now? Would the Germans make a pogrom here as well? Would they smash the windows and beat men in the streets? It was hard to fathom, but of course so many unthinkable things had already come to pass. She does not understand the politics of men, their deals and handshakes and pronouncements. She does not understand why they have to fight.

The cracks in the plaster ceiling look like the boot of Italy. She traces the coastline south from Trieste to Venice, Bologna, Bari, Brindisi. She pictures pastel houses nestled into hillsides, fishing skiffs pulled up on beaches, café tables by the sea. The Graphic Atlas, too, is washed in pastel colors: chalky green for Germany, pale yellow for Czechoslovakia, pink for Palestine. Drawn in cross-section, scored with lines of longitude, planet Earth is a ball of blue. Now Czechoslovakia was no more. Green over yellow left no trace.

From the other room comes the radio’s dull drone, her father’s low tones and Hugo’s louder protests. Someone is shouting drunkenly down on the street. Her grandmother is wailing. Ich nach Hause gehen wollen! As if she could just throw wide the windows and fly back home again. If she could, Lonia would sail into the night, out over the red roofs and church steeples, the rail yards and steel mills and mine dumps, the heaps of coke and slag, the telegraph poles and tram lines and the laundry fluttering on backyard lines, out over the border guards and barricades, the soldiers cradling their rifles, over the invisible wall of the frontier.

Lonia blinks and the ceiling cracks morph into the outline of a castle, a tunnel, an underground lake. Where would she go, what would she do, if she had a magic wish?

Her father is touching her shoulder. “Are you in pain?” She tries to focus. No, it’s not her father. It’s her daughter Esther, leaning over her, her dark hair loose, her pale face pinched. The darkness surges and recedes.

“You were crying out. How long have you been awake?” Lonia struggles to sit up but finds that she cannot.
“You don’t have to be a martyr, for god’s sake, Mum.” A finger slides a tablet between her upper gum and cheek. “Can I get you anything else? Water? Are you hot?”

Lonia manages to shake her head. Esther sighs and shifts. “I’ll sit here with you for a bit. Now that I’m awake.”
She is as distant as another planet in the dark. Lonia’s eyes drift closed. Behind her eyelids, galaxies swirl blue in space. Margot Singer, associate professor of English, won the Flannery O’Connor Award for Short Fiction, the Reform Judaism Prize for Jewish Fiction, the Glasgow Prize for Emerging Writers, and an Honorable Mention for the PEN/Hemingway Award for her story collection, The Pale of Settlement. Her work has been featured on NPR and in the Kenyon Review, the Gettysburg Review, Agni, and Conjunctions, among other publications. This excerpt from Singer’s new novel, Underground Fugue, is reprinted here with permission from Melville House Publishing. Copyright © 2017