After a dominating performance in February at the North Coast Athletic Conference meet, Madison Hopkins ’21 and the rest of the women’s swim team were absolutely sure the 2020 Division III NCAA championship meet would be their crowning moment. Years of work and countless hours of practice had all built to this one event. None of that mattered, of course, amid the emerging COVID-19 pandemic. Just like that, the meet was canceled and students were sent home.

“It was absolutely devastating, to be quite honest,” Hopkins says. “We were all in a room and everyone was crying and trying to process in their own way. There’s a global pandemic, and I felt stupid for being so upset about a swim meet. But, it was something that I had put my whole heart into, so of course it’s going to be painful and heartbreaking when it’s taken away.”

It wasn’t just a canceled meet. Her sport was gone too. The longest Hopkins had ever been out of a pool since she could learn to swim was two weeks. With no access to a pool during the spring and summer, she didn’t swim for about four months. It was, Hopkins says, “a dark time.”

Late in the summer, she began swimming in the Finger Lakes in upstate New York. The experience rekindled her passion for the sport, and for her team. Back on campus for the fall semester, the swimmers learned there would be no competitive meets during the fall semester and only a limited schedule during the spring. There would be no conference or national meets to test themselves one final time.

“It made us focus on each other, which is a very powerful thing,” Hopkins says. “It was devastating to not have the senior year I expected to have, but the people on the team made it absolutely worth it.”

Similar scenes played out across the spectrum of Denison athletics. Every team had a different set of challenging circumstances to navigate. Some had entire seasons canceled, while others picked up games where they could. They all quickly became used to COVID-19 protocols that included mask-wearing, separate team pods, and multiple tests per week.

As the realization that their senior seasons would be much different than they had imagined took hold, frustration and sadness mixed with moments of unexpected joy. Those conflicting emotions produced a year unlike any other before. Through it all, the senior class leaned on each other and their teammates to make the most of their athletic experience. 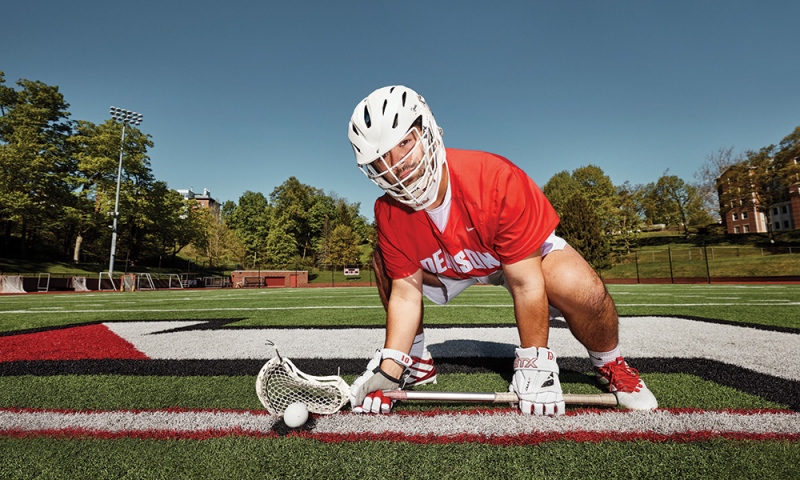 Opportunity lost: It hit people differently when our season ended. At the time, we were 4-0 and getting in the groove. We had faced four different types of teams and dealt with four different types of adversity. Our team chemistry was really coming together, and we were finding our identity. For the freshmen, they didn’t exactly know what they were losing. The juniors and seniors knew exactly how special that team was.

Reframing: One thing that helped motivate me was stepping away from it. Reflecting on the future, mentally preparing, and then slowly mapping out what a longer break would mean in terms of training. We sent workout videos to each other, just checking in with everyone. It was a lot of communication.

Proper mindset: We never put blame on COVID or made excuses. It was another type of adversity that everyone is facing. Framing it that way really translated into the season. Between testing, social distancing, and working in pods, people were able to come together as a full team. 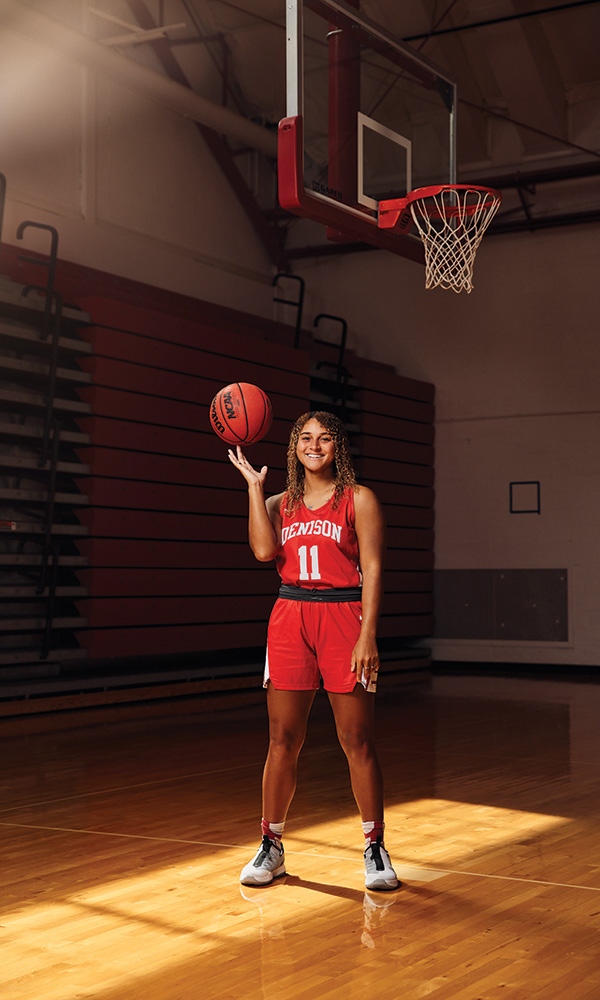 Communication challenges: Our team chemistry is important. When COVID first hit and we weren’t able to see each other, the entire team was in panic mode. Going into the summer, it was a challenging adjustment. It was devastating to me personally, but I had an entire team of women who were also experiencing the same things. I felt like I needed to put my own needs aside and focus on them.

A shortened season: We played eight games. I remember there was a time when we all found out our conference tournament was canceled in February. Everyone was very sad, including me. It was an emotional time. I’ve been playing basketball my entire life, and it’s my identity. That was the most important time to step up. It was my duty to reassure everyone and let them know it’s going to be OK.

Stress release: Especially with academics, I felt a lot more pressure for some reason this year. Basketball was really my place to disconnect. My teammates were my escape route. I love the women on the team. They’re my best friends, and I’m sure they’ll be my best friends 35 years from now. Having the opportunity to put it all on the court and let out some stress has really been a blessing.

Mental health toll: My senior research is on student athletes and mental health. I’ve found that an overwhelming amount of athletes have been really stressed out and experienced a lot of emotional distress with COVID. It’s important to recognize that. 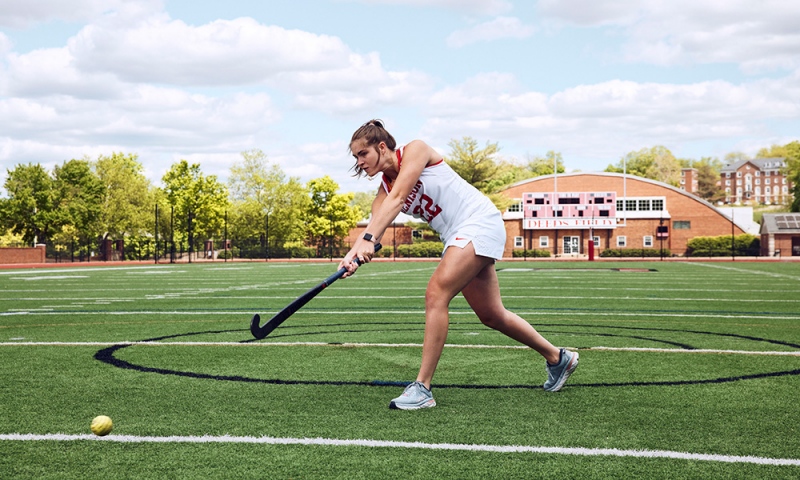 A lost season: During the summer, the buildup was heartbreaking because we knew it was coming, but there was also something to hold on to. We were having meetings, and I was in direct contact with our coach. She called and said, “I have to tell you there’s not going to be a season.” There were some tears, I’m not going to lie. Some angry tears. Frustration. Getting on the phone with everyone and seeing people’s faces drop, it motivated me to make this more than just a season that we lost.

Program building: The seniors banded together, trying to organize socially distanced events and having silly conversations in the group text. We just tried to instill the culture that this is a super open environment and we welcome all personalities. This program gave so much to me and the other seniors—how can we give back? It’s so irreplaceable, and once it gets taken away, you realize how much it means to you.

Intrasquad scrimmages: That made our year. For me, specifically, I just loved being on the field and the competitiveness and strategy of the game. Being able to still have opportunities to get into that was beyond me.

A foundation: I never dreamed that I would go to a college program and get to the Sweet Sixteen. That never occurred to me. Reflecting back on it, we created these relationships that are literally going to last a lifetime. 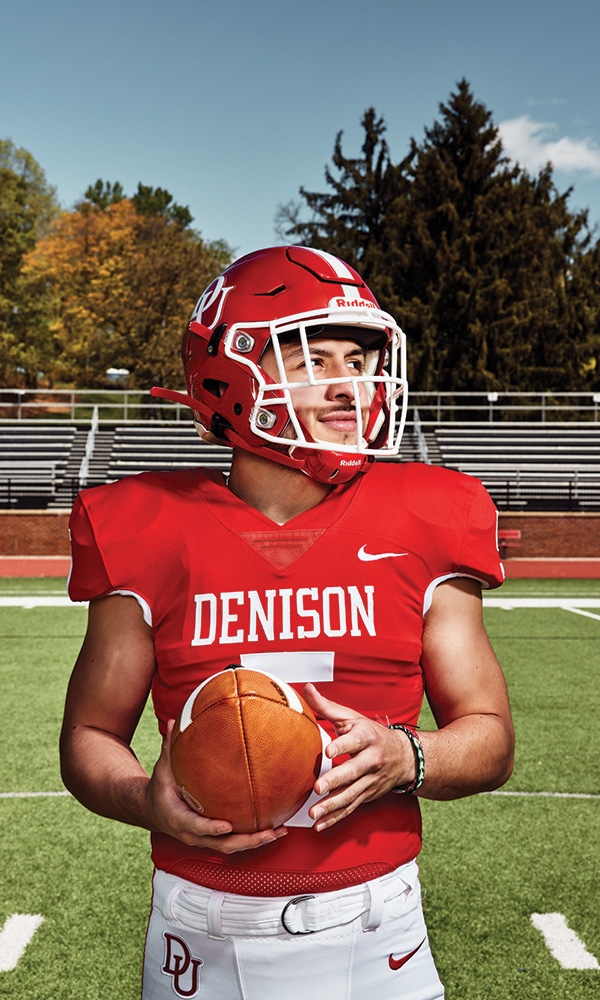 Summer uncertainty: We had the intention that we were going to play a full season. I trained every day and then, a week before we came back for camp, they told us our season was canceled. You’re left with that awful feeling. We practiced really just to practice and for the love of the game.

A lost opportunity: It affected me a lot. My first two seasons, I was developing as an athlete. Junior year, I get that starting position, and senior year is supposed to be my year. I’m putting in the work to become a first team all-conference player and then COVID hits. It broke me down. When I was at my lowest, the bonds I’ve created through football helped me the most.

Setting an example: Every day in practice, I came with the attitude that we’re going to have fun. My game is I bring the juice, I bring the energy just to uplift everyone. I’ve come to the realization that I developed myself to be in a position to motivate and inspire my teammates to see within themselves and become better individuals.

Final games: It was like bursting a bubble. Everything we built, we finally were granted an opportunity to show it. I can end things on my terms. The fact that we came out with wins, no matter what happened, we were going to bounce back. 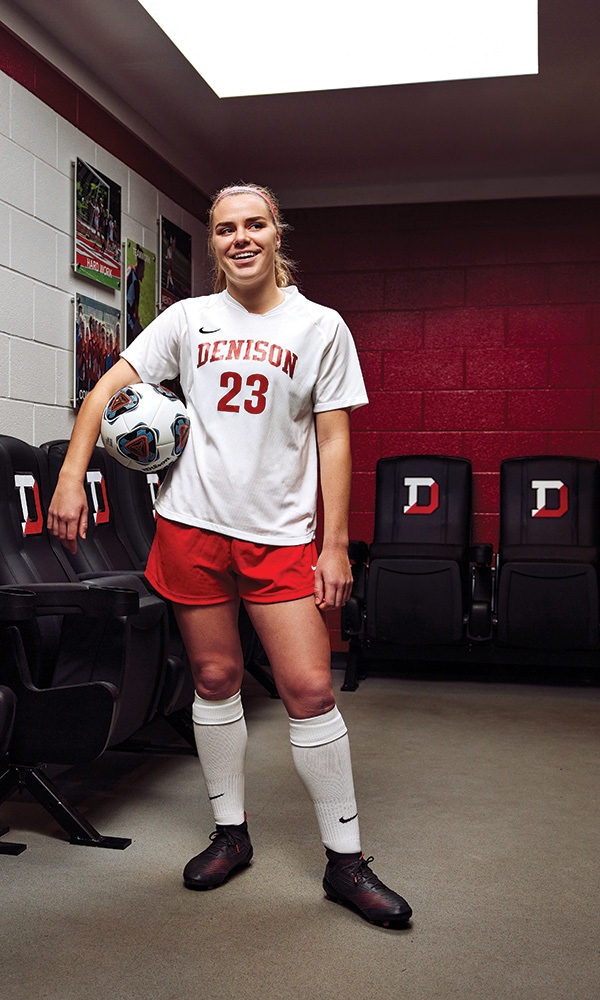 Preseason camp: That has always been my favorite part of the season. It’s hard work, it’s double days, it’s sprinting. There’s nobody else here, so it’s great team bonding. You’re exhausted at the end of the day, but it’s so much fun. We had three pods, and we were only allowed to practice with our pod. There were limitations on contact, so we had to do drills from afar. I viewed it as a privilege. Not that many other schools were even back on campus, let alone having their athletes play. I kept preaching to my teammates: gratitude, gratitude, gratitude.

Mixed emotions: As the season went on, I think my excitement was met with sadness because this was the last time being able to play soccer at this level. We were able to have scrimmages, but it’s not the same. We tried to make the most of it.

Leadership lessons: The responsibility is on the seniors to be a model for what a women’s soccer player would be, not just at practice, but across campus. For all the stress and sadness, I would do it again. Tenfold. I’ve so appreciated being a leader on that team. It’s made me a better person, a better player, a better student, a better friend. All of it.

Closure: That’s the one thing that’s been tough. I don’t feel this great sense of closure. Our season ended on a random Saturday after a scrimmage where we were just playing each other, eight on eight. The game ended, and it was like, I guess that’s it. At the same time, how much closure can you actually get? I don’t think you’re ever ready to be done with your sport that you’ve been playing since you were four years old. 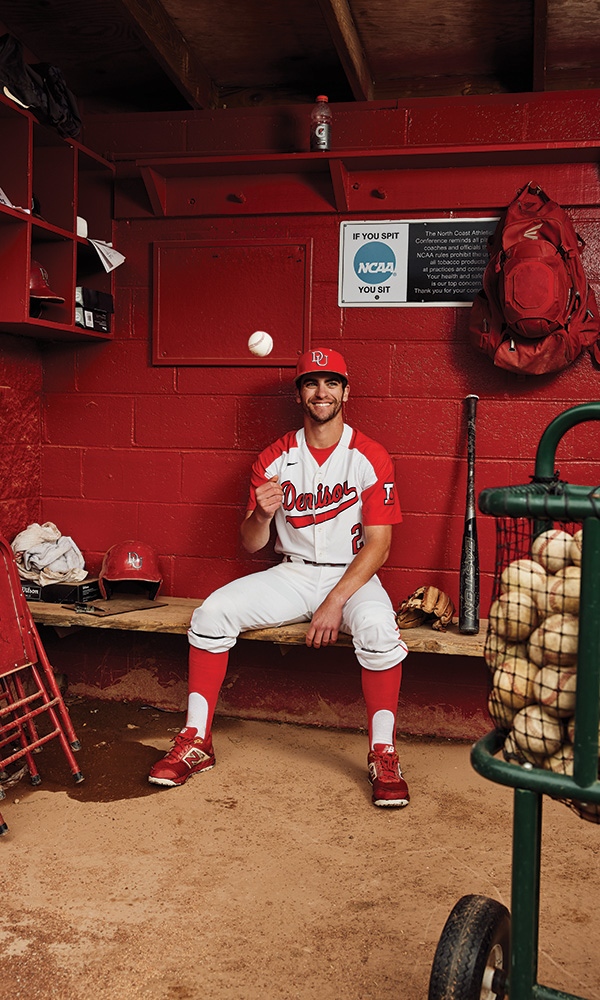 A sudden halt: It was a Thursday. Our coach called us into a room and said our season is in jeopardy. About two hours later, we got a text saying our last game is on Saturday. It all came to a stop in a matter of 24 hours. It was shocking, but looking back on it, it was the right choice.

Now what? This is what I’ve done my entire life. Spring is baseball. Summer is baseball. Fall is baseball. Now, all of a sudden, I don’t have baseball, and I don’t know when I’m going to be able to play again. That was the biggest challenge with COVID, the uncertainty about the whole thing. That still exists today. The big thing for baseball players is we live in the present. With COVID, it’s even more important to stay present, because you have no idea what’s going to go on in the future.

New realities: We show up to games with masks on and we go through the other protocols, which are fine, we’re used to it now. We use baseball as our getaway. You can forget about everything for three hours because this is our sanctuary.

Last at-bats: I remember thinking on a bus ride home after a game—this was before COVID—I have this year and next year, and then I’m done. I’m never going to play again. Then COVID hit and all that got taken away. Three weeks later, I said to myself, “Wow, I might have one year left. Maybe.” That was a real eye opener for me. I appreciate the game so much more. Even the practices when it’s cold or you’re tired or sore, I’m enjoying those a lot more because I don’t have many of them left. It makes me stay present and enjoy the game right in front of me, because there’s no guarantee that next week’s game is going to happen.