When Karen Wright’s infant girl became lethargic and weak in the spring of 2018, she was diagnosed with spinal muscular atrophy,  a genetic motor neuron disease that causes loss of control and wasting away of the muscles located in the spinal cord.

The baby’s case was dire when she was brought in to see Barry Byrne ’78, director of the Powell Gene Research Center at the University of Florida: SMA affects 1 in 11,000 babies and is the leading genetic cause of infant death.

But Byrne had reason to be hopeful for this particular little girl, as at that same time, he and his team at Powell were awaiting approval from the FDA for a gene therapy called Zolgensma—an infusion that uses a virus that can slip through the body’s immune system and causes no illness of its own to transport genes to cells in need. “We knew it was pending when she came in,” he says. “Its approval was imminent.”

When the drug became available, Byrne led the medical team responsible for the baby’s treatment, the only approved gene therapy for any pediatric population for neuro-muscular disease. And that baby became the first infant with SMA to be treated with the commercial gene therapy Zolgensma. The one-time treatment also saves the child from her only other treatment option—spinal tap injections every four months for the rest of her life.

“If you can restore the gene function, you can stop the disease,” Byrne says. 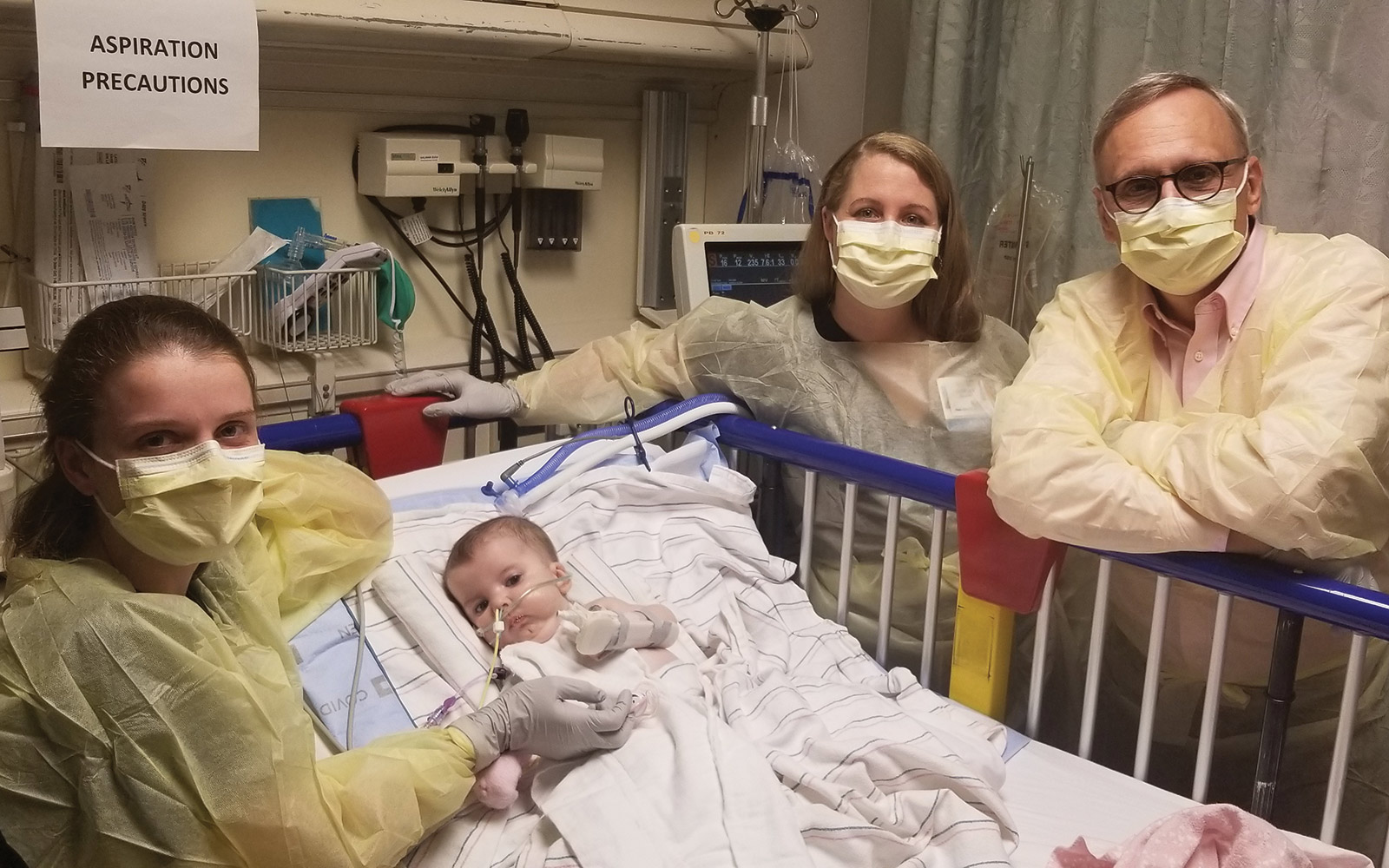 This photo of Londyn Wright and her mother Karen Wright (left) was captured on the day the baby girl received Zolgensma, a gene therapy infusion meant to treat her spinal muscular atrophy. Kara Godwin Wild and Barry Byrne were with the fami…

Barry Byrne’s interest in pediatric genetics began when he was working with a clinical geneticist—his clinical advisor—while pursuing his M.D. and Ph.D. at Johns Hopkins.

“At that time, it seemed like most problems adults faced were based on their own behavior and not the cards they were given, whereas peds was just the luck of the draw,” he said. “Of course, today, we know a lot more now about our predispositions to disease, no matter our age.”

Because most pediatric heart failure is due to genetic causes, Byrne conducted his postdoctoral work in cardiology. It was during that time that he helped cement the cornerstone of this gene therapy infusion technology by contributing to the discovery of how AAV vectors deliver genes to muscles. Today, his research goes to the base causes of inherited muscle diseases such as Pompe Disease, Barth Syndrome, Duchenne, and other muscular dystrophies. He focuses on conditions leading to skeletal muscle weakness and problems in heart and respiratory function.

With Byrne’s development of the Powell Gene Research Center, where they can make large or small batches of biological drugs, therapeutics for these rare diseases have been and will be able to advance from research to practical usage. Byrne’s team can teach manufacturing groups to make the drugs or make them in-house for easier access to the amount of materials they need, and Byrne’s wide berth of experience in multiple medical fields allows him to play a managing role in the evolution of these technologies.

“My role is to develop new ideas that help patients who have no alternative treatment options,” says Byrne. “I see patients in the clinic and in the hospital. I also supervise, managing people and training students how to do this.”

Shandra Trantham is one of those researchers, and she suffers from the very disease that is Byrne’s next battle.

By the time Trantham was 12 years old, she had developed severe scoliosis and her doctor noticed she had a strange gait. She stood with a wider stance than most children and couldn’t walk in a straight line. That’s when she was diagnosed with Friedreich’s Ataxia (FA), a neuromuscular disorder that affects one out of 50,000 people. It’s a genetic condition where the body doesn’t produce enough of a certain type of protein, frataxin, and over time, the absence of it damages the nervous system and the heart, and causes reflexes to slow and limbs to stop responding to commands from the brain.

“I started doing research on the internet at 13, finding out what FA is, what it means, and what I could do for myself. And the answer was nothing,” Trantham said. “If you Googled FA, the first suggestion was Wikipedia, which said death by 30. So, I’m 13, and I was like, ‘Wow, half of my life is already over.’ I was really upset. I had this plan for myself, and that plan wasn’t going to happen.”

Now 22 years old, Trantham uses a walker to get around. But in Byrne’s lab as a second-year graduate student, she can dedicate her life to finding ways to reverse the damage caused by FA.

I like the fact that no two days are the same. Patients are our priority, and whatever it takes to get these innovative ideas, we follow that path.

“There are symptomatic treatments: walkers, wheelchairs, therapy, and the like, but at their root, these diseases are genetic, and until we developed therapies at that level, there was only so much we could do,” Byrne said. Unlike current treatments that only stymie the symptoms of these conditions, gene therapy could stop the degeneration at its root by changing the defective gene sequences themselves.

“I was a patient in [Byrne’s] study before I applied for my Ph.D.,” Trantham said. “What they are doing with gene therapy is something I really wanted to be involved in. I realized that if I wanted to get better, I couldn’t just sit back and wait for the answer to be found, I had to be part of finding it. I know there is a large gap between science and the patient community, so getting to be in the position where I’m in both parties is helping me connect those worlds,” Trantham said. “I can explain the science to my friends with FA, and I can show the scientists what the personal angle is.” And Byrne thrives on that personal angle. As he integrates clinical research with clinical care, patients come to the Therapy Center to be part of clinical trials engineered to formulate new cures and solutions for genetic malfunctions. Byrne sees them over a long period of time, tracking their wins and losses and progress, and caregiving remains a large part of his role, regardless of definitions.

“Each research patient is very intensively studied over the time period of the study,” he said. “We would only have 30 patients, so we get to know them as we go.”

Byrne, with all his expertise and medical knowledge, is a problem-solver at heart. “He’s the kind of guy where if there isn’t something there to help, he’s going to make a solution available,” Trantham said. “As patients, we want all of our doctors and researchers to have that trait.” Byrne’s team has now secured recurring funding for FA research, and they started a new gene therapy clinical trial for FA in January, which will take five to 10 years.

“I like the fact that no two days are the same. Patients are our priority, and whatever it takes to get these innovative ideas, we follow that path,” Byrne said. “It’s a unique blend of discovery, bio-chemical research, and the clinical research, which is here in that general care setting.”

Byrne’s technologies are on the cusp of becoming more normal and accepted, and he says that marketing research has amplified interest. As the new chief medical advisor for the Muscular Dystrophy Association, he hopes to make even more of a difference and increase public intrigue.

“It’s like a land grab for interesting tractable causes,” he said. “If it is amenable to fitting in AAV, (larger genes can’t fit), people are interested in using it. Take Duchenne muscular dystrophy, for example. These patients may only survive until their late-teens or early 20s, so a meaningful treatment can be transformative to extend and improve quality of life.”

For her part, Trantham is cautiously optimistic about future therapies for her and others with FA.

“I wish I could reduce the disease so much that it’s like I don’t even have it, but I have to be rational as a scientist,” she said. “I believe that with future medical advancements, it’s not going to be too late for us. For those of us who have had the disease for years, I still believe there is a chance.”