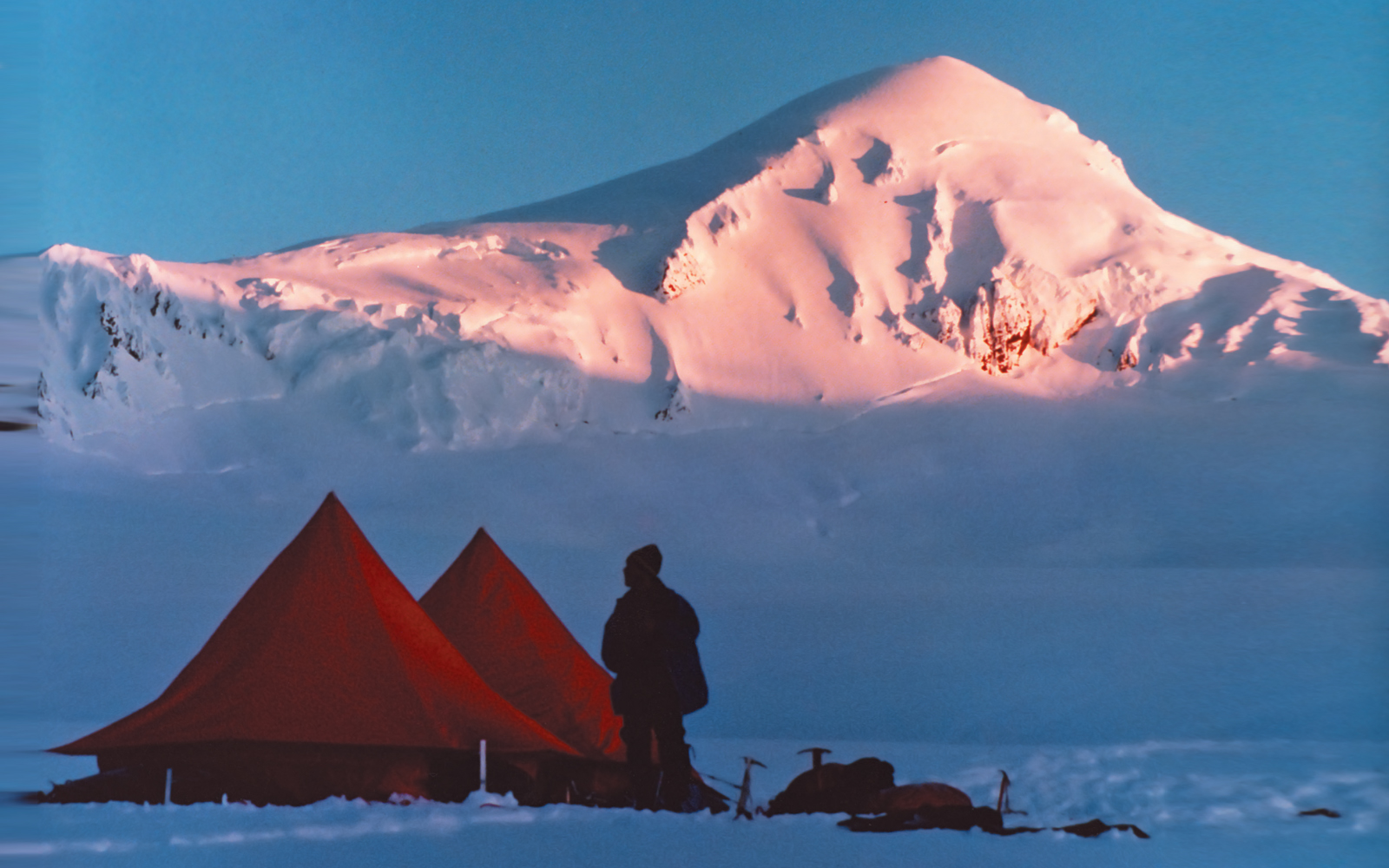 A rare, heartening sunshine falls on Mount Denison on the morning of the final ascent—a welcome sight to the weather-worn climbers.

Their view of Mount Denison’s distant peak, while a gut-wrenching disappointment, was the first visual identification of the mountain since Kirtley Mather named it nearly 55 years earlier. When the first expedition landed on a rocky beach at Alaska’s Hallo Bay to begin its ascent, Mount Denison was obscured by clouds and remained so during the entire trek. There was simply no way for them to chart an accurate route to what they perceived to be the summit, much to the chagrin of the second expedition. The first expedition, had it been successful, may have met with the same unpleasant surprise.

Mount Denison lies within the remote boundaries of Alaska’s Katmai National Monument, the largest unit in the American National Park Service System. In 1923, Mather was part of a U.S. Geological Survey team sent to the base of the Alaska Peninsula, about 300 air miles southwest of Anchorage. From June through October, Mather traveled the back country by horseback mapping the region. The highest summit he saw, an extinct volcano, he named for his alma mater.

Fast forward to 1976, when Allen Parchem, assistant professor of psychology and director of Denison’s Wilderness Outreach Program, learns of a display Barney Hall dedicated to Mount Denison. It was the first time he’d heard of it, but his immediate reaction was to climb it. He believed that he, along with Bill Dennis, who ran Wilderness Outreach with him, and a few undergraduates and recent alumni were ready for the challenge. Nearly as difficult as climbing Mount Denison, however, was raising the money to get there, even though the expedition had the university’s blessing. Parchem noted that the group had about $1,500 available to it from the university, leaving thousands more to be raised independently. But the enthusiastic group—the two professors and Faraci, Phillips, Berizzi, Brooks, Soaper, Jan Auman ’78, and Susan Goodale ’80—got the money and a plan together and embarked upon the adventure of a lifetime.

Parchem said that he had his first taste of their forthcoming difficulties at King Salmon, Alaska, which was the group’s last stop before being flown by a bush pilot to the foot of the mountain. The team loaded more than 700 pounds of gear onto a single engine DeHavilland Otter cargo plane. The Otter was likely overloaded for this flight as it strained to lift above a runway lined with wreckage from previous unsuccessful flights. On the first attempt to reach their Hallo Bay destination, a low ceiling prevented them from passing through the mountains. They had to wait three more days for the Otter to safely deliver them to a rocky beach and the journey’s true beginning.

The trek began with a soggy five-mile march through an alder brush-laden, icy cold swamp to Hallo Glacier at the base of the mountain. Legions of brown bears lurked everywhere. They continually clapped their hands and banged on their backpacks to keep the bears away. Fortunately, the bears were too stuffed on salmon that time of year to look upon the group as anything but a curiosity.

After camping the first night, three members forged ahead to find a good route to the huge Hallo Glacier. It was more than 300 feet thick and topped with ice towers called seracs. The surface was so heavily broken and crevassed that it looked like a sea of peaks. No snow was left on the ice and the next day’s travel would be wet and slick. The worsening weather and the rumble of ice falling off the glacier warned of harsh conditions ahead.

They roped themselves into two teams and made their way up the ice. Rain pounded in frigid torrents, but the glacier provided nowhere to make camp. Trudging forward, their morale eroded in the nearly horizontal rain and their mental determination became more important than physical conditioning or climbing skill.

The weather was relentless. Whiteout conditions made it impossible to find the horizon through the wall of swirling snow. Parchem and Dennis, both self-proclaimed worrywarts, slept in separate tents as not to fuel each other’s anxiety. They each felt a parental responsibility to the rest of the team and things were not going well. But one morning, over a week into the expedition, Parchem happily woke everyone, proclaiming that the sun was shining through the clouds like rays of hope. For the first time in days, reaching the peak seemed possible.

Beautiful weather and excellent climbing conditions—for about an hour. Slowly, the clouds enshrouded them and the inevitable pounding rain returned. The beleaguered team pushed onward, their visibility dropping to near zero. They came upon a large crevasse and Brooks, the excellent climber at the head of the group, had the honor of trying to find a suitable ice bridge to cross it. Gingerly, he moved over the snow, poking it with an ice pick before taking a step. It wasn’t long before Brooks ran out of rope and he’d still found no way across the crevasse. He unclipped himself from the others and ventured forth alone, disappearing into the dense fog.

“Espen, come back!” cried Parchem. His mind raced with panic as he faced his darkest worry. “Get back here!” For what seemed like an eternity, there was no reply. Parchem searched for the extra ropes and anchors to follow Brooks into the fog. Brooks’ silhouette finally emerged through the gloom. His expression was gloomier. Not only was there no good way across the crevasse, but there was another larger crevasse beyond it. That was it. It was too dangerous to continue. Begrudgingly realizing they would not reach the summit, the expeditioners solemnly turned back to set up camp at the old site.

It would take days to get back to Hallo Bay and another three days of waiting on the beach for the Otter. Back in Anchorage, Faraci, Brooks, Phillips, and Berizzi sat at the airport bar, reflecting on their experience. They vowed to return. 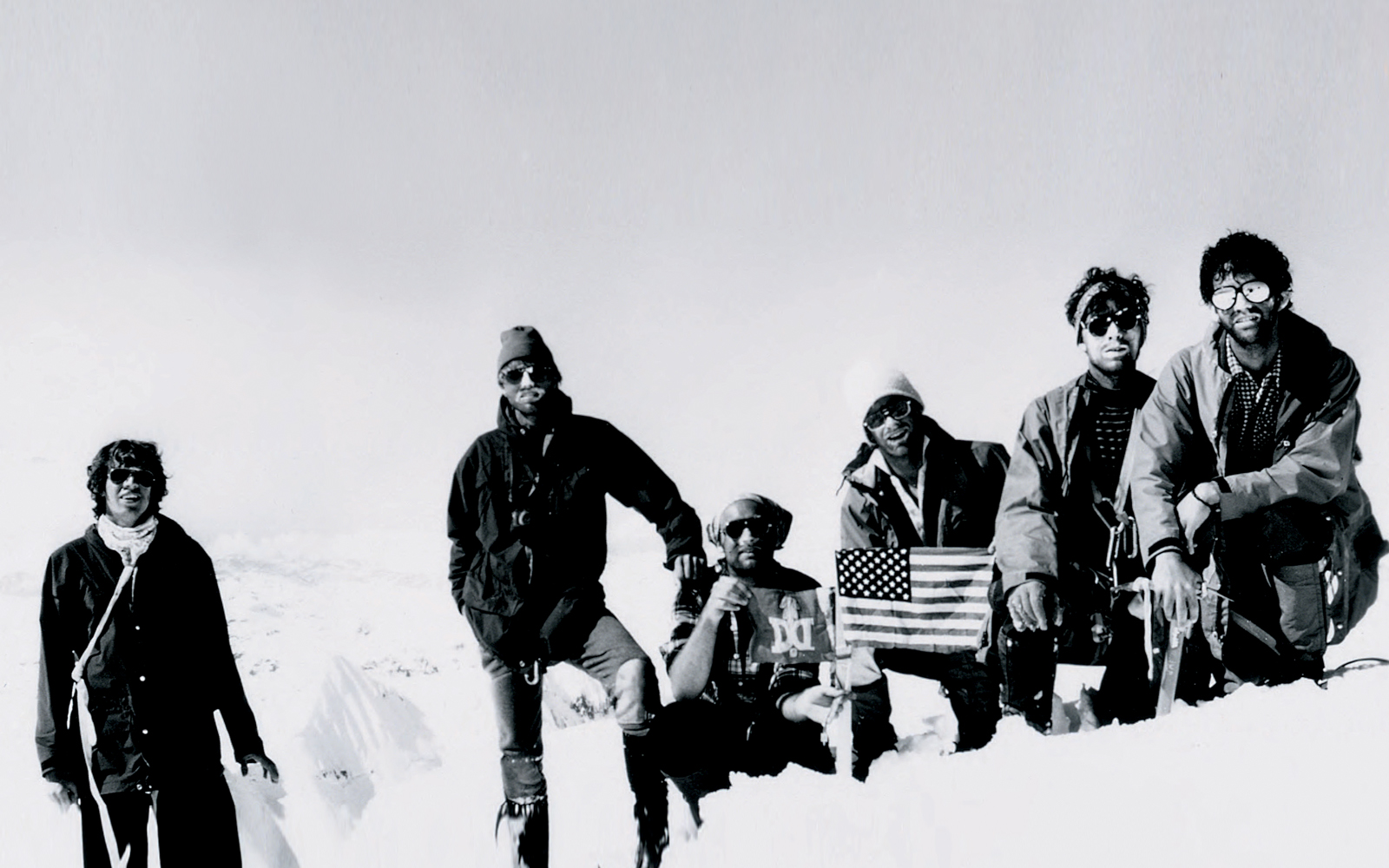 How frustrating it is for the second expedition, ten months after suffering through one failed attempt, to now be staring at Mount Denison’s peak in the distance. Just moments ago they had believed that they reached the summit. There is immediate denial and lots of soul-searching. Most of them accept that their map was wrong and they had simply picked the wrong peak, rather than that they had lost their way in the whiteout and their instincts had failed them. But, regardless of the reason for the misjudgment, they have time, the weather is cooperating, there are no expletives left to shout, and there is only one thing to do—keep going!

The next morning they make excellent time getting up and over the lower slopes. The weather and the snow conditions are so perfect that they change their route midway in favor of one steeper and more direct. An avalanche is a very real possibility, but there’s no time to dwell on such dangers.

Kick, step, anchor, kick, step, anchor—it’s a delightful climb straight up the side of the mountain. The summit nears. Deftly, carefully, Brooks leads the expedition through uncertain footing at the lip of the real summit. It’s the expedition’s first clear day and the false Mount Denison lay below, completely exposed. What a perfect climax! They plant a marker—dated for the 1977 expedition—at the peak, alongside Denison and Alpha Tau Omega flags and a Phi Beta Kappa key. As if right on cue, a small plane flying through the mountains buzzes the expedition and waggles its wings in recognition. At last, Mount Denison is theirs!

A world-renowned climber once told Parchem, who was unable to join the second expedition, that he’d walked off of far more 20,000-feet peaks than he’d ever climbed. Sometimes it’s just a matter of persistence. Parchem, who is now president and CEO of the management consulting firm RHR International, said that those on the first expedition were forced to rethink the way they looked at winning versus participating. They had to mature a bit. They didn’t get to the top, but they had accomplished a lot on that trip, including setting the groundwork for the successful second venture.

Faraci said that many of his mountain climbing skills helped him to become CEO of the International Paper Company, the same company he had been working for in the late ’70s. A business leader, like a mountain climber, must possess the ability to rely on others while also contributing as an individual to meet a common goal. Through mountain climbing, Faraci learned to be a courageous achiever, not a bystander.

Wiggin, now CEO of the biotech company Attogen, Inc., wishes his daughter could have a similar experience to his Mount Denison adventure. He dreams that she’s on top of a mountain in New Hampshire. She still has five miles to go before making camp and she’s cold. As Wiggin sees it, such experiences at least unconsciously provide a background for facing tough situations in everyday life. “Once you’ve climbed a mountain,” he said, “there’s a high degree of thinking of yourself as different from everyone else.”

Scott Rawdon is a writer from Newark, Ohio. Portions of this article were excerpted from previous written accounts by John Faraci and Allen Parchem, who wrote for the Autumn 1977 issue of this magazine, and Richard Wiggin, whose story was published in the June 1980 Alaska magazine.