“Blacks went to HBCUs and the small liberal arts schools like Denison had very few Black students,” says David McBride ’71. By the late ’60s, with the civil rights movement in full swing, the tide had turned. Denison and other predominantly white colleges and universities sought to recruit Black students for the first time. As Denison’s Acting President Parker Lichtenstein noted in his 1969 State of the College address, “competition among colleges for Black students is very keen.”

But when students like Henry Durand ’70 and McBride arrived on The Hill, they found few opportunities for meaningful engagement. There were few Black students to forge camaraderie and socialize with, no Black faculty to learn from and to model careers in the academe, and no courses on African-American history, art, or culture. “I, like a lot of students, just tried to blend in or assimilate,” recalls Monroe Little ’71. “But we didn’t see any real return on our efforts at assimilating.”

In the fall of 1969, Durand, McBride, Little, and others including Darrell Brown ’71 and Beverly Byrd-Lloyd ’73, turned the disappointment that had kindled into action. They formed the Black Student Union—which endures today, 50 years later.

The time was right, as 1969 marked the first year Black students had matriculated to Denison in double-digit numbers. The entering class of 17 women and six men joined the previously enrolled eight Black students to add new backgrounds to the campus atmosphere. These trailblazers also would go on to create a legacy.

Students who had been virtually invisible would soon be clearly noticed. Issues that never had been addressed would soon be confronted, and problems that were often minimized or ignored across the nation would soon have the attention of the entire Denison community.

These 31 students were from the eastern, western, northern, and southern parts of the country with varying backgrounds, but a desire for unity was shared among all and viewed as important, urgent, and necessary.

American higher education in the 1960s was a divided landscape.

WITH A UNIFIED VOICE

“When I came to Denison from New York City it was quite a culture shock,” says McBride. “The small number of Black students and allies began to unify and gradually became the Black Student Union. We’d share stories, get advice, and it was also a place where we could speak with a unified voice—that was really important.”

The group came up with “big fancy titles, like chief minister and vice minister,” laughs McBride. Durand, whose fiery rhetoric had stirred students to action in the spring of 1968 with a letter to The Denisonian that captured Black students’ frustration with the college—and whose warm demeanor made him popular with Blacks and whites across campus—served as the BSU’s first chief minister. Under Durand’s leadership, the group used their unified voice to advocate for critical improvements for Black students, including social opportunities. 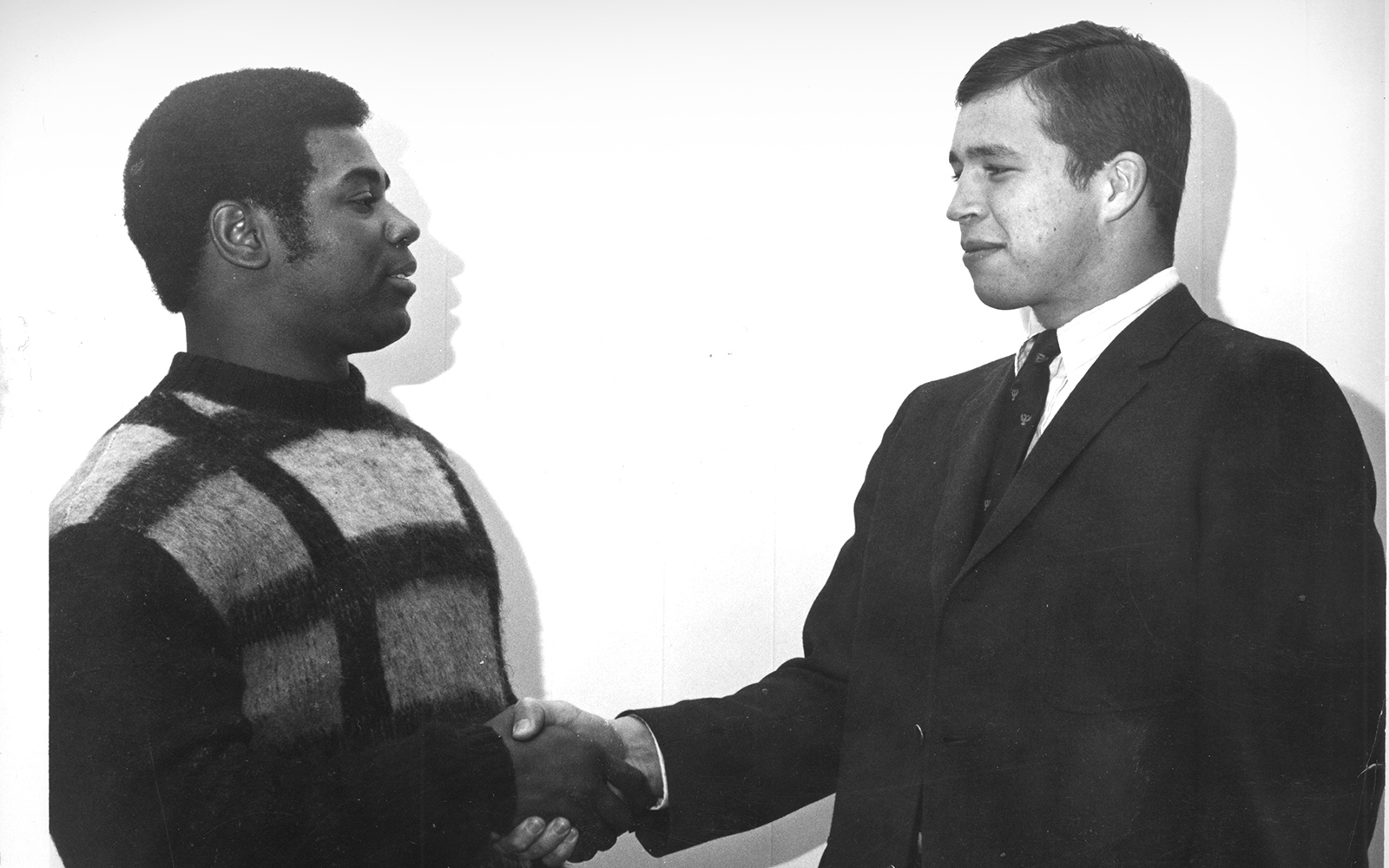 Henry Durand ’70, who died in 2018, and Scott Trumbull ’70 were teammates on Denison’s football team. They would go on to work together for the betterment of the college after graduation. Durand became the president of the Black Alumni Asso…

“Back then, the social scene for students was controlled by fraternities and sororities,” says Little. “I believe all but one fraternity had racial clauses in their institutional documents, which meant that even if you tried to pledge, you weren’t able to get in because of your race. You were automatically excluded.”

The BSU lobbied the administration for a dedicated space for socializing on campus, as well as a car for travel to nearby cities like Columbus and Newark. “We would go around to colleges and universities throughout Ohio connecting with Black students and giving them support, telling them how to establish a BSU,” recalls Brown. “We visited the University of Cincinnati, for example, and helped them set up theirs.” It was a model of inclusion that they wanted to share. “As on other college and university campuses—such as San Francisco State, where the nation’s first BSU was founded in 1966—the BSU at Denison became an inspiration and a model to other student groups of color and other marginalized students on predominantly white college campuses about how to form support groups, and how to organize to help their academic institutions build a more inclusive educational experience for all students,” says John Jackson, associate professor of Religion and Black Studies.

Still, there was much work to be done at Denison. In December 1969, the BSU put forth a list of demands to the college’s executive board. They argued that five Black professors should be hired right away, an Afro-American Studies Department should be established, 100 new Black students should be enrolled with the help of a new full-time recruiter, Black advisors should be hired, and they demanded a departmental-level commitment to integration across campus.

Wrote the students: “The Black Students at Denison in the spring of 1968 decided that Denison was not relevant to them as Black men and women, and concluded that they had a choice of either leaving the University and transferring to another school or trying to improve the circumstances here on this campus.”

With a healthy dose of “youthful optimism,” as Little recalls, they chose the latter.

By 1979, Denison made history as the first college in the nation to require students to complete a minority studies or women’s studies course as a graduation requirement—progress that stemmed from the BSU.

The pace of progress ignited by the BSU was often frustratingly slow—but it was progress nonetheless. President Lichtenstein made it a focal point of his 1969 State of the College address, noting that applications from Black students had increased, as well as scholarship funding; that a new Black culture course was “a beginning” (it would eventually become the cornerstone of the Black Studies Program); that several Black students had rushed and pledged in the Greek system; that Granville homeowners renting to students were now required to sign a non-discrimination agreement; a new Afro-American lounge would soon open “to all students; but emphasizing Black culture”; and that a proposal for an Upward Bound program had been submitted.

As the college sought Black faculty, BSU members McBride and Little were tapped to teach an African American studies course, supervised by Acting Dean Wally Chessman. While it was unusual for undergraduates to simultaneously teach, both men were history majors who “wrote a lot about Black history,” says Little. “And that was most of our focus, even when we were taking traditional American history classes.”

By 1972, Denison had hired Art Zebbs, who became the first full-time director of the Black Studies Program. And by 1979, Denison made history as the first college in the nation to require students to complete a minority studies or women’s studies course as a graduation requirement—progress that stemmed from the BSU and its insistence that integration and diversity be more than lip service. 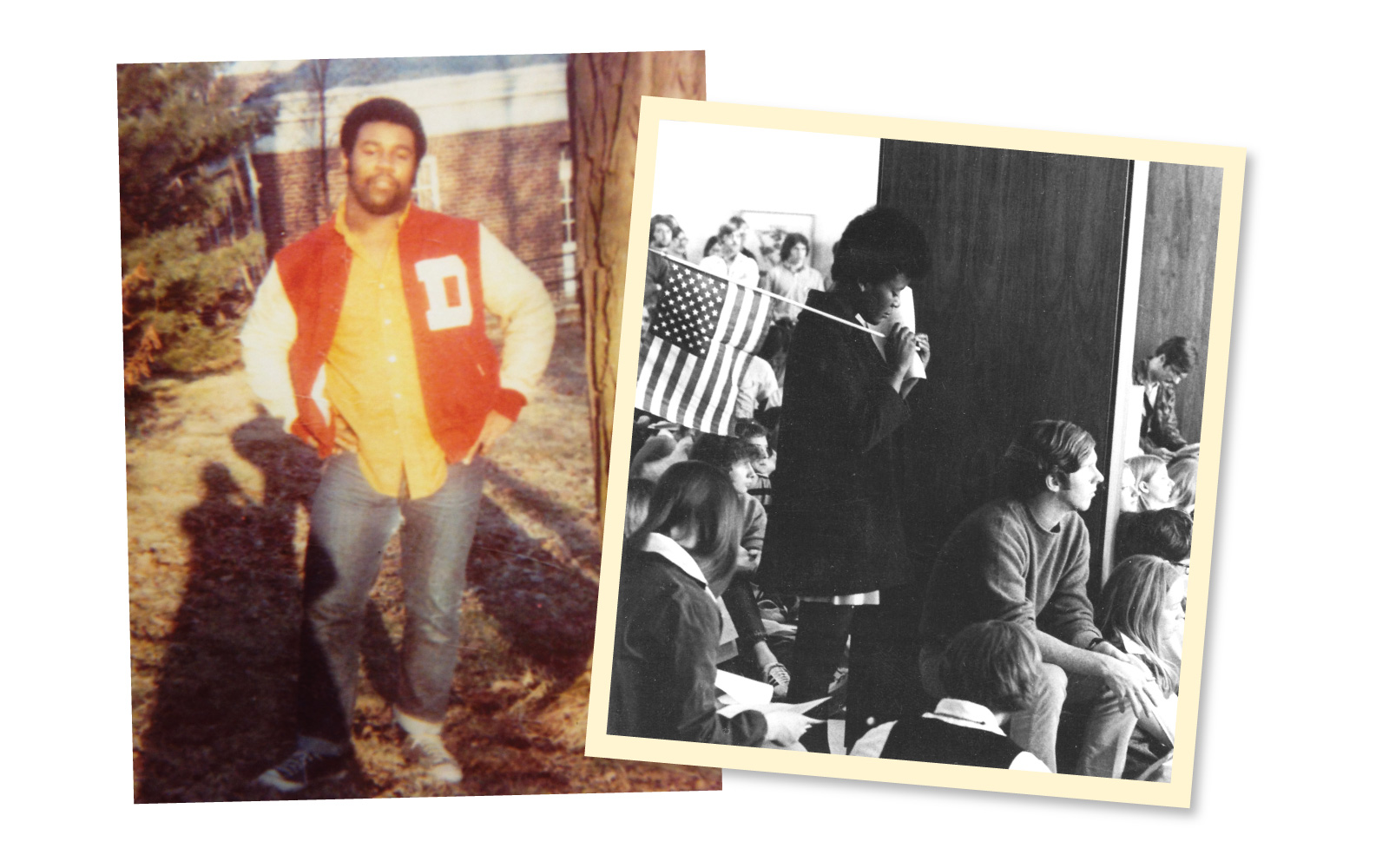 Henry Durand ’70 (top, left), the only Black student on the football team in the 1971, was the first chief minister of the BSU. Students bring their concerns to the administration in 1969 (bottom, right).

THE BSU THROUGH THE YEARS

In the five decades since its founding, the BSU has continued to have an impact. In the mid-to-late 1980s, the organization was an instrumental part of a larger student-led effort to persuade the college’s Board of Trustees to divest from apartheid South Africa.

And while things had improved for Black students at Denison since the 1960s, they certainly weren’t perfect. “There was a lot of exclusion, and you met that exclusion every day,” says Candace Koney ’88, current historian for the Black Alumni Association. “This was the 1980s, so we were post-active Civil Rights, where things were supposed to be better. And they were certainly not as tumultuous as the ’60s and ’70s. But you were an ‘other.’”

For Koney and others in the BSU, it was a place for belonging. “The BSU was a network where, as a Black student coming in to a predominantly white institution, you could create familial bonds with people you weren’t necessarily related to, but who understood you because you had some unique experiences that were similar,” says Koney. “It was a safe space where you could just laugh and be understood.”

Eric Norris ’05, current president of the Black Alumni Association, echoes that sentiment. “For African-American students, the BSU gives you an environment that is familiar.” And, says Norris, the BSU helps to educate the general population of Denison students—some of whom may not know any students of color. “The BSU helps to showcase other cultures, and has been a space to bring people together more than to divide them. It supports and uplifts students of color, not just African-Americans.”

The legacy left by the BSU endures through the work of current students—who joined former members this fall during Big Red Weekend as the BSU celebrated 50 years. Together they discussed where Denison has been, where it’s going, and the importance of the work ahead for current and future members. Today’s students are just as enthusiastic in the organization’s work to provide support for Black and multicultural students at Denison. “The whole weekend was amazing because current undergraduates were able to talk with and learn from our founders and also recent alums for whom the BSU was an integral part of their Denison experience,” says Lariona Jacobs ’20, current chief minister. 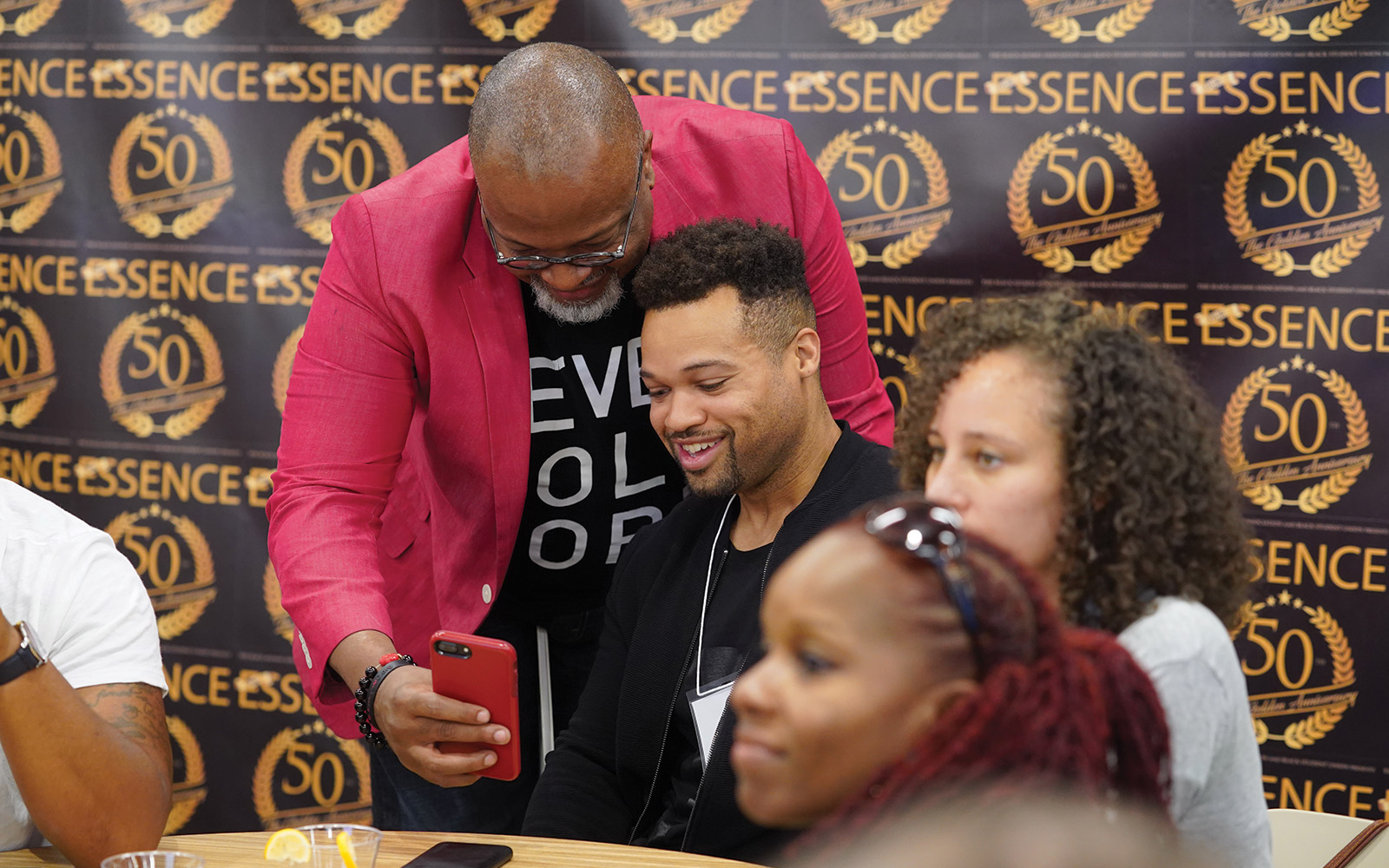 During Big Red Weekend this fall, current BSU students met with alumni members to discuss Denison’s history and progress—and the future work of the organization.

What will the future hold? Perhaps more collaborations with BSUs at other universities to grow students’ networks beyond Denison. “We want to expand our horizons,” says Jacobs. “I think that 50 years from now, the BSU will continue to grow as Denison keeps getting more diverse. Students will have the BSU to talk about the issues that arise.”

Current Denison students also work to commemorate the history and struggle of those who came before them, so the BSU can look to continuing progress toward even higher goals. Says Denison student Giquise (“Gigi”) Jones ’21, “In the BSU, I am in an environment where others relate directly with my struggles. The organization is a symbol of my voice and the voices of many who had to fight to be recognized and represented. They made an amazing difference in my life.”