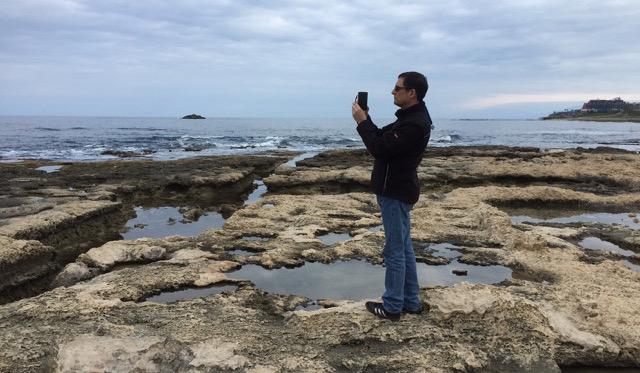 There's something special about Cyprus that draws Cinema Professor, Dave Bussan '81 back time and again.

Dave Bussan has been traveling to Cyprus for over 30 years and has amassed 25 separate visits. His fascination with the country goes back to his time in graduate school at CalArts when his Denison mentor, Elliott Stout, invited Dave to tag along on a film shoot in 1984. Elliott was working on a film to explain the story of newly declared independent Turkish Republic of Northern Cyprus. So at age 25, Dave set off for Cyprus to start an international adventure that continues to this day.

Needless to say, Dave fell in love with the island. Culturally and architecturally, Cyprus lies between Europe and the Middle Eastern Levant and represents layers upon layers of history and stories. There are ruins dating back to 6000 BCE. The Greeks, Byzantines, Assyrians, Romans, Crusaders, Ottomans, British and more have traipsed through and conquered and lived on Cyprus. Most notably, Alexander the Great once conquered Cyprus and the Venetians built many of the city walls during their reign. The Byzantines built many of the island’s earliest fortifications.

Dave’s second trip to Cyprus was a J-Term Denison trip with Elliott and Denison students in 1986 during which Dave acted as a second chaperone. They followed with May Term trips in ‘93 and ‘94. Over the years, Dave has taken many Denison faculty and friends with him to Cyprus. The place keeps calling him back. About 20 years ago, Dave started filming his own documentary on Cyprus that he will complete soon.

With frequent visits, Dave has also learned some Turkish. He took two quarters of the language at OSU during a sabbatical and has had a number of tutors, including some Denison students. Having some capacity with the language makes travel and connecting with locals easier. He says he feels very at home in Cyprus with many long-term friends on the island.

Dave has had many other international experiences, mostly in Europe, ranging from the United Kingdom, Spain and Ireland to Greece, Turkey, France, Sicily and Malta. He says traveling has helped him grow and stretch himself and he strongly encourages his students to go abroad, get out of their comfort zones, and take calculated risks that will enhance their growth and development.