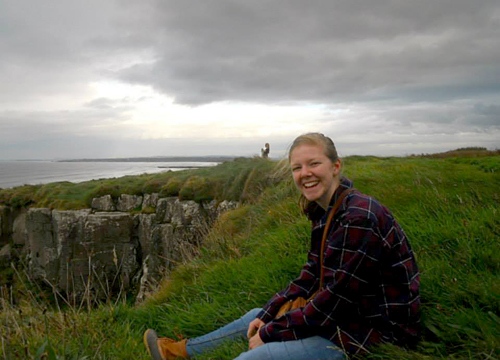 Nia D’Emilio ’16 found that faith has moved out of church and onto the streets.

It’s funny how a simple choice of one word can say so much about you. As Nia D’Emilio ’16 was ending her day at an internship in a small town in Ireland, she stopped to have a friendly conversation with a sanitation worker. When D’Emilio asked him if he was from the area, the janitor made a point to call the town “Londonderry.”

With that single piece of information, D’Emilio knew something very personal about the man—his religion.

The Northern Ireland town’s name is hotly contested between Catholics and Protestants; Catholics refer to the city as “Derry,” whereas Protestants call it “Londonderry.”

“Religion doesn’t operate as a faith but as an identity,” said D’Emilio, who is uncomfortable with that fact.

“My semester abroad has completely changed the way I look at and interact with my major.”

D’Emilio, a religion major from Pittsburgh, elected to spend a semester abroad participating in the Higher Education Consortium for Urban Affairs (HECUA) program in Derry/Londonderry, Ireland, during the fall of 2014.

Professor of Religion John Cort encouraged D’Emilio to go abroad to “see religion in a much more complex set of factors.” He promotes semesters abroad. “They give students the opportunity to take their education and push it in ways the classroom doesn’t allow.”

Cort makes frequent mention of the Northern Ireland program because “HECUA programs tend to generate questions that students want to find answers to when they come back.”

For D’Emilio, the most appealing aspect of the program was the many opportunities for hands-on learning in the community she called home for four months.

In addition to classes, program participants complete internships with organizations across the city. D’Emilio chose an internship that aligned on her interest in theatre. She worked for The Playhouse, an organization that brings Irish citizens from both sides of the conflict to produce art together. “Art does not have boundaries,” D’Emilio said.

At the Playhouse, she participated in activities with local youth and developed an educational program to accompany one of the center’s upcoming productions. And she still had plenty of time to pursue two academic research projects.

With a group of other HECUA students, D’Emilio investigated how various political and religious groups influence remembrance rituals, such as public memorials. On her own, she explored terrorism and its impact on current politics in Northern Ireland.

D’Emilio continues to wrestle with the idea of a religiously based conflict. “It goes far beyond religion — Northern Irish citizens don’t even need to practice a faith to identify with the Catholic or Protestant stance on the situation.”

Cort said, “Nia’s reflections are a prime example of how students returning from abroad use what they learn in an on-going way.”

“My semester abroad has completely changed the way I look at and interact with my major,” said D’Emilio. “Now, I critically examine what I learn in the classroom and I am more conscious of how people interact with each other. I would certainly encourage other religion students to spend time abroad.”