Inside the French Embassy 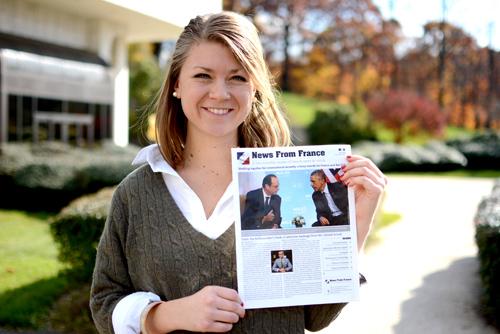 For Courtney Vinopal ’13, working for the French Embassy in Washington, D.C., is more than writing and editing. It’s an opportunity to represent a unique and fascinating country.

After teaching in France for a year following graduation, Courtney Vinopal ’13, an English and French double major and communication minor, is integrating her fields of study in a unique role working for the French Embassy in Washington, D.C.

Vinopal’s official title is managing editor of publications for the Press and Communication Office at the Embassy of France, a position that she says utilizes a combination of her different interests and skills.

“The major goal is to communicate news and promote a positive Franco-American relationship to an American audience,” Vinopal explains.

“Every day is truly a cultural exchange. Working for a different country, there are different expectations, different sets of values and a different history.”

Though her schedule changes from day to day, depending on what is happening in Washington, D.C., each week, Vinopal’s responsibilities include creating content for the website, writing articles about newsworthy events, designing the monthly newsletter “News From France,” and developing content for social media platforms.

“There is a lot that goes into it because you’re communicating on behalf of France as a country,” she says. “We are trying to be more active through digital diplomacy, using social media in order to communicate policies and visions of a country.”

“Every day is truly a cultural exchange,” says Vinopal. “I’m always learning. Working for a different country, there are different expectations, different sets of values and a different history.”

Vinopal experienced immersion into that culture through her study abroad in France during her junior year. Following her graduation from Denison, she continued her French connection when she was awarded a French Government English Teaching Assistantship and returned to work in French schools.

“As an elementary school teaching assistant, I was placed in a tiny town in the Alps. It forced me to use my French. When you’re in a small town you are less likely to know people who speak English,” she said. “It was a great opportunity to go abroad again. Traveling teaches you so much that you can’t learn in a classroom.”

During her time at Denison, Vinopal completed her senior research for the communication department, exploring the media portrayals and expectations of female politicians in France versus the United States. Her research required her to read news from both France and the United States.

“Now that I’m out in the real world, I’m fortunate to have found a job that allows me to integrate all the skills I gained working with those different departments in a role that is pretty unique at the embassy,” she said.

For a sample of the newsletter Vinopal manages, check out: http://www.ambafrance-us.org/spip.php?article746