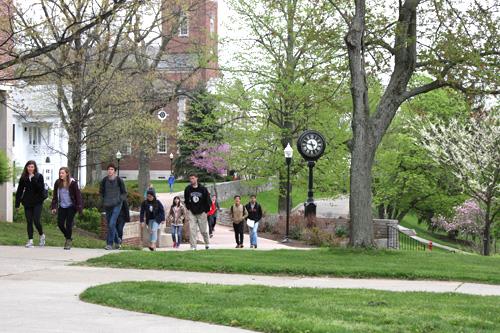 Denison received a record number of applications for admission in 2015 — a 24 percent increase over last year's figure.

After setting a number of significant high-water marks over the last several years, Denison University’s Office of Admission has seen even more remarkable gains in 2015.

The most notable record set this year is the number of applications for admission. Denison received nearly 6,100 applications for some 600 spots in next fall’s first-year class. This year’s applicant pool represents an increase of 24 percent over last year’s highly successful enrollment campaign. Along with increased ethnic, socioeconomic and geographic diversity, the academic profile of the accepted class is among the strongest in recent history.

“Why such great numbers? There are so many factors to consider,” says Denison’s Senior Associate Director of the Admission Office Mike Hills. “Our reputation as a premiere liberal arts college is among the best in the country, which makes our job easier in a challenging admissions climate, and in addition to the Midwest and Northeast, which have always been good places for us to enroll high-achieving students, we’ve been working really hard to recruit equally qualified students from the South and West.” Hills added, “We’ve also concentrated on raising our visibility and engaging our alumni, current students and parents to help us spread the good word about Denison. They’ve responded very well, and it’s truly heartening to see how much our alumni value their Denison education.”

“Our reputation as a premiere liberal arts college is among the best in the country, which makes our job easier in a challenging admissions climate.”

Of those students from the United States, currently about 24 percent of Denison students come from Ohio, with another 29 percent from the Midwest outside of Ohio. Mid-Atlantic and Southern states account for about 29 percent of students, about 10 percent call the Northeast home, and 10 percent hail from the Southwest and West. International students comprise about eight percent of the student population.

Denison is featured in New York Times best-selling author Frank Bruni’s new book “Where You Go Is Not Who You’ll Be,” and is a mainstay in Loren Pope’s definitive “Colleges That Change Lives.” Denison’s place at the forefront of higher education is consistently recognized by U.S. News, The New York Times and Forbes, among others.

Sawyer Hall
Built in 1925, Sawyer Hall is a residential community with single, double, and suite-style rooms on East Quad.