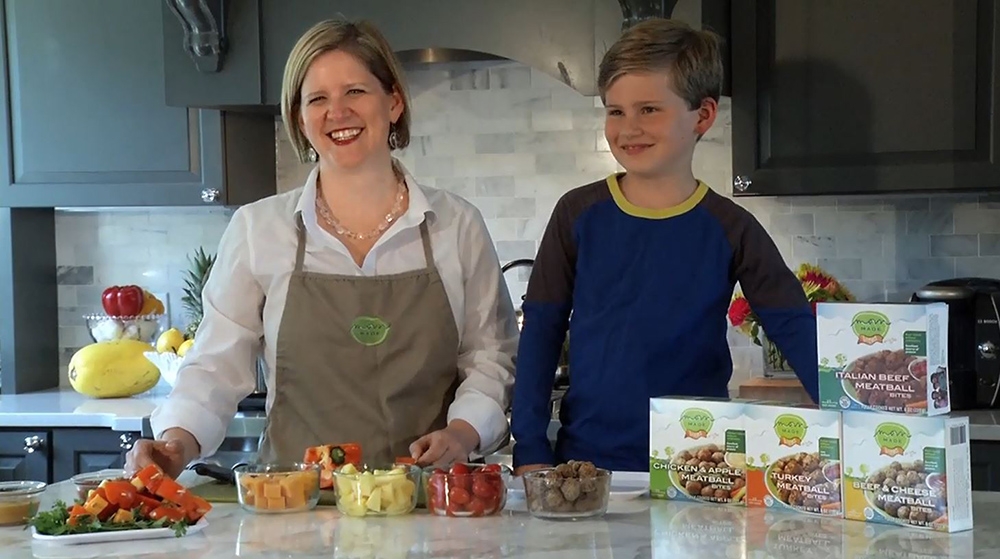 Heather Stouffer ‘96 with her son Emory and samples of her “Mom Made” frozen meals.

They live on opposite ends of the country and have never met in person, but George Pierce '81 and Heather Stouffer '96 discovered a shared enthusiasm and a common purpose in the different types of businesses they own. So they're sharing resources and partnering in a new venture.

How did these two business leaders meet and find a way to collaborate? The common denominator is a new program at Denison — an Entrepreneurship Summit that will be held on campus in September of 2018. Pierce and Stouffer are both on the summit’s advisory board, and as they talked about their companies and the philosophies behind them, they realized they shared a strong common thread.

Stouffer’s story started in 2006, when she launched Mom Made Foods in Alexandria, Va. Offering freshly made all-natural frozen meals for children, Mom Made is sold in grocery retailers nationally. Stouffer’s active family revolves around a healthy lifestyle. Her husband is a triathlete, and her daughter and son are competitive athletes as well. Emory, Stouffer’s twelve-year-old son, is a soccer player, triathlete and runner; her daughter Audrey is a budding gymnast and runner.

From his hometown of Bend, Ore., Pierce also embarked on his own enterprise, Pierce Footwear. He perfected a lace-less, sock-lined shoe designed for athletes, and built his first shoe in Palo Alto in 2012. A four-year Denison lacrosse player and a world champion in running and biking, Pierce designed the shoe to support his TEAM USA comeback after a bike-car accident. He’s dedicated to improving the shoe for each world championship.

Pierce had a start-up in mind: a new line of shoes, called T2, specifically for athletes aged 5-12. After meeting Stouffer, he knew just who to turn to for advice on how to market to moms. Pierce mailed Stouffer’s son a pair of his shoes for a test run. “Emory’s just the kind of ambassador we’re looking for, a great athlete and a rising star,” said Pierce. Another pair is on the way to Stouffer’s daughter, who is clamoring for them after seeing how cool they look on her big brother.

“We realized that we both wanted to reach the same kind of people,” said Stouffer. “Families that value a healthy, active lifestyle.” Together, they put a plan in motion.

Stouffer sends notices to her client base about T2 shoes, while Pierce, who served Mom Made food at his product launch, provides coupons for Mom Made Food with each purchase. They both are adding T2 product information to their websites, collaborating on a Mom Made/Pierce racing team for kids, and co-writing articles for their new kid-focused emagazine, GoPlayFit.

“Our Denison connection created an inherent trust and helped smooth the way toward our working together,” said Stouffer. “Denisonians are great. I’ve had Denison interns; a good friend of mine, Greta Berger Dirsel ’96, designed the Mom Made label; one of my board members is the husband of a sorority sister.”

“Heather’s been outstanding,” said Pierce, who also cites another Denison friend, Mike Redmond ’83 as a huge help in launching his product. “Mike grew up in New Hampshire with the kids of Jim Tompkins, who was a president of New Balance shoes for ten years. Mike’s introduction to Jim made it possible for us to produce the commercial release of our first shoe, the T1.”

Both Stouffer and Pierce have also found ways to “give back” through their work.

Stouffer focuses on ways to help families get good nutrition from healthy food and snacks that kids like. Mom Made Foods also has taken major steps towards educating families about nutrition and the epidemic of childhood obesity.

Pierce has tested the shoes on those recovering from trauma, stroke and rehabilitating from hip surgeries where tying laces was virtually impossible. He discovered that his T1 shoes were great for people with disabilities, back problems and arthritis. In 2017, a variation of the T1 became the official shoe of the Special Olympics World Winter Games in Austria. Pierce himself outfitted more than 2,000 athletes, many of whom had never trained in properly fitted shoes or been able to put them on without help.