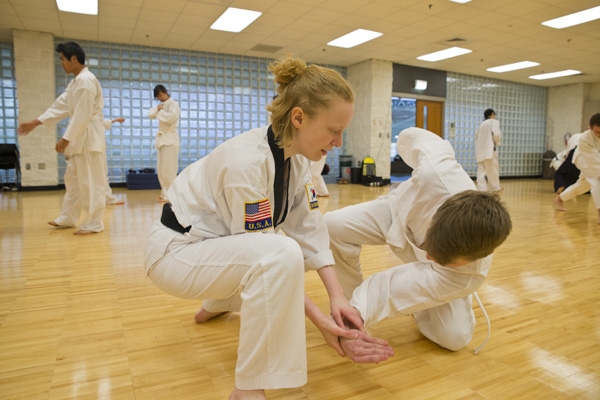 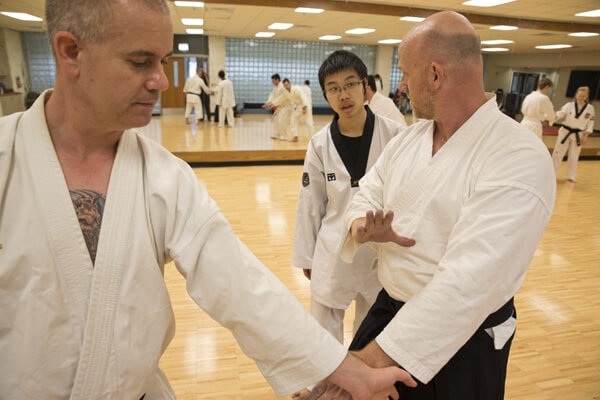 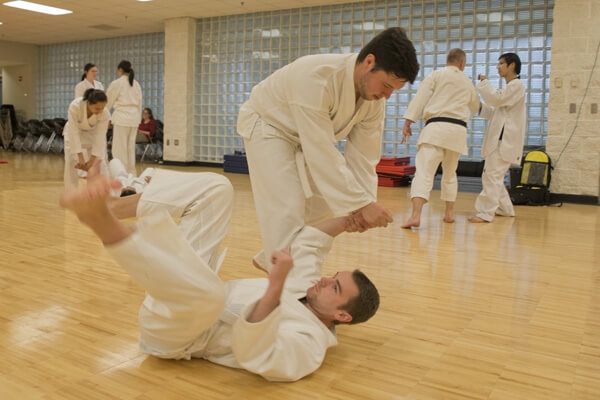 The students are decked out in the white garb of the martial arts, but no one here is an expert. With her right hand, one student grabs the left wrist of another student and gently and slowly pushes his arm away from her, bending it at the elbow, creating the shape of an L—a perfectly natural way for the body to move, really.

But she’s simultaneously pushing her opponent’s forearm further to the left (decidedly unnatural) causing him to drop to the floor. Once down, she reaches out to help her classmate to his feet, before they do it again and again and again, until it’s his turn to practice the aikido move demonstrated by Michael Tangeman ’91, associate professor of modern languages and an aikido practitioner.

As the students work, Tangeman walks around the Multipurpose Room of the Mitchell Athletics Center, offering edits to the students’ form as his teaching partner, Eric Winters, associate professor of health, exercise & sport studies, explains to the students why the move, biomechanically speaking, is so effective.

The course is one of the Denison Seminars, sometimes taught by faculty from different disciplines, but always aimed at sophomores and juniors to encourage them to think about subjects from multiple perspectives. Their course for the Spring 2015 semester was “Japanese Martial Arts,” and the perspectives covered everything from anatomy to Japanese culture as represented in the dojo.

For Tangeman and Winters, the newly established seminar program proved the perfect opportunity to look at one of their mutual interests—the martial arts—from both a cultural and a physical perspective. From the start, they established a give-and-take atmosphere—a trait typical of martial arts training in which the sensei imparts lessons on junior students, who accept those lessons, polish them, and pass them on to other students down the line as they excel.

In that vein, the faculty duo chose to dedicate part of the semester to karate (the art that Winters studies and teaches outside of Denison) and the other part to aikido so Tangeman could share his art with Winters and with the 11 students who met two days a week in the classroom and one day a week in the “lab,” where they got first-hand experience in the ways in which different arts reflect Japanese culture and the body’s physical response to movements.

It can be said that each of the martial arts from Judo to Jujitsu from Brazil to Japan has its own personality. Aikido seeks to find balance between body and mind, and is more strength and meditative practice than competitive aggression (though don’t be mistaken, an aikido practitioner could still take you down if he or she felt threatened). It makes perfect sense that Tangeman, a soft-spoken and thoughtful professor of modern languages, might be drawn to the meditative repetition of its training. Karate, on the other hand, is more competitive and, in some ways, physical, which fits Winters, another thoughtful professor, of course, but one who spends his days in the Mitchell Athletics Center surrounded by coaches and Denison athletes.

Given the draw of certain personalities to certain disciplines, the seminar culminated in a creative project for the students that required them to take all they had learned throughout the semester and develop their own martial art—from its name to its nature to its dojo

A look at the Denison Seminars slated for the fall semester.

This seminar will contemplate a pretty big question: Is democracy compatible with religion? The class will examine the point-of-view of philosophers, judges, legal scholars, and empirical social scientists from a variety of disciplines to discuss the ways in which religion contributes to the public good and how democratic societies create space for religious actors, made especially relevant with the recent Hobby Lobby and Obergefell decisions in the Supreme Court. The class will even travel to Washington, D.C. to interview religious advocates and others about their experiences.

“Shakespeare by the Sword”

An English lit expert and skilled competitive fencer (he has two national championships to his name and a spot in the U.S. team that will compete in the Veterans’ World Championships this fall), teams up with a theatre professor and actress to offer a course in which students learn fencing skills while studying Shakespeare’s work on the page and on the stage. The course even includes a field trip to Stratford, Canada. Swords, theatre, and literature? Yes, please.

At the end of the academic year, Tangeman and Winters headed back to their respective departments to prep for the 2015-16 school year, which will be host to a slew of other seminars, but they plan to team up again in the future—not just for the teaching experience, but for the learning experience as well.