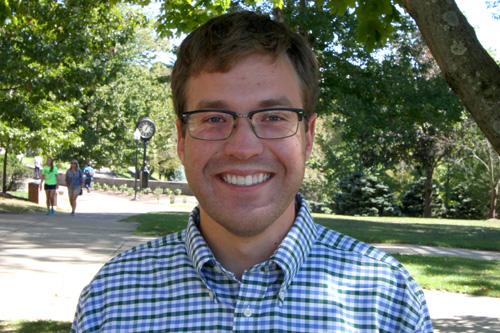 The intersection between America’s churches and the force of entrepreneurship.

For religion major Dylan Parson ’16, entrepreneurship offers a potential solution to many of the challenges facing American churches today.

“Our efforts will have to be imbued with the ability to work within an old system to create something new.”

“The social power of the church in America is declining, and that’s a good thing,” Parson said. “That gives the church the opportunity to be an alternative social agent.” Parson’s argument is that the church, like any social collective, can only integrate with the dominant forces of a society at the cost of its own independence.

Today, the question is what the church can do, not to only retain its congregations, but to help provide for them in a socially conscious manner. “In the American Christian churches, there’s a lot of complacency and an expectation that the old model will just keep working,” said Parson. “I realized that if religious actors want to accomplish anything on the religious front, our efforts will have to be imbued with the ability to work within an old system to create something new.”

This is where he sees entrepreneurship as playing a role. Talking about the vision he has for the church as an economic engine in struggling communities, Parson cites influences from his involvement with the Denison Enterprises, which was founded to create and empower student businesses, and his participation in a Denison Social Entrepreneurship workshop.

“I think it was the workshop that really tied it all together for me,” Parson remarks. “I’d been thinking in my religion classes about the role the church could play in driving social change. The workshop showed me that there are ways to do it tangibly.”

“Whatever role the church takes on will have to be a response to the needs of its community,” said Parson, who wants to pursue a seminary education after graduation from Denison. “Maybe that will consist in a storefront that a church runs to raise money while employing congregation members, or maybe it will be something else.”

For those who may be hesitant regarding the idea of the church as an entrepreneurial agent, Parson is sympathetic. “I’m not looking to conform the church to a business model,” he says. “Just the opposite. I want the church to work to subvert exploitation; I want it to be an enterprise working for the good of the people. The church has a real opportunity to exist as an alternative model of community and provide a way to move forward.”