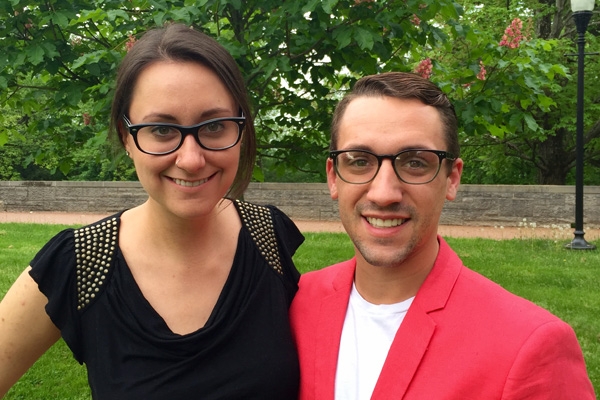 The leadership in Outlook to offer tips to supporters.

June 19 marked the kick-off of our great city’s annual Pride celebration. The Stonewall Columbus Pride Festival and March celebrates LGBTQ life in the city with performances, vendors, bike rides, a history lecture, and a parade—all at Goodale Park, all weekend. The upcoming festivities got us thinking about how we can better support the LGBTQ community in Columbus, at Denison, and beyond. So we reached out to Brian Allen ’17 and Amanda Peiffer ’16, current president and vice president of Outlook, a student-run Denison organization that offers support for the LGBTQ community and its supporters. We wanted their advice on how to be better allies. Here’s what they had to say.

One of the biggest things an ally can do for a person that identities as LGBTQ is listen. Not just listen with your ears, but actively listen with heart, mind, and with respect.

Sometimes queer people just want allies to say, “I can’t fully understand what that feels like, but I want you to try and help me understand so that I can support you.” Having empathy is really important.

Being LGBTQ is different than being heterosexual, and all the identities within the LGBTQ community are vastly different as well. As allies, it is important to be supportive even if something a person in the LGBTQ community is going through might not have been something you have ever heard of or experienced before. Supporting LGBTQ people can be vital to the acceptance of themselves.

The best allies go beyond supporting LGBTQ people by simply putting a sticker on their door, or car, and actually take the time to understand some of the issues in the LGBTQ community. We think it is especially important to be educated about the transgender community.

Everyone does something for a reason. So trust that for whatever reason, people in the LGBTQ community are not “just going through a phase”; they are actually defining parts of their identity. LGBTQ people are so much more than their sexuality. They are citizens, fathers, mothers, aunts, uncles, people, so trust that any decisions they are making regarding their identity are to make them more true to themselves.

While allies are great, it is important for allies to remember that they cannot speak on behalf of the LGBTQ community, as their life experiences are so different. But supporting people who identify as LGBTQ and transgender when they speak for themselves goes a long way.