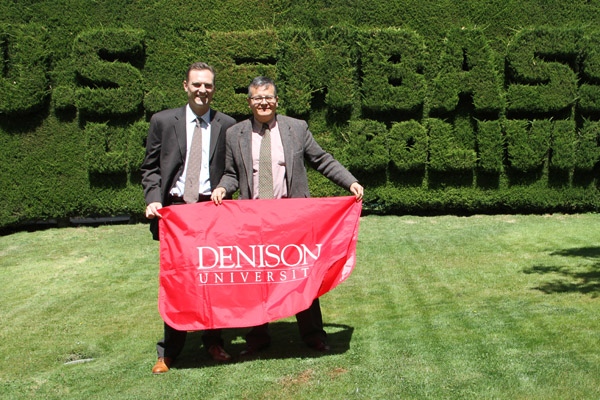 Both changed by Denison, two alumni cross paths in Bolivia.

For one brief, harrowing moment on his first day at the U.S. Embassy in Bolivia last summer, Chase Beamer wondered what he’d gotten himself into. “The first morning I was here, I went into the cafeteria to get a cup of coffee,” Beamer ’97 remembers, “and I get mugged by this guy.”

That memory, shared over the phone from La Paz, is punctuated by a shared laugh—Beamer’s, and that of his well-meaning assailant, Diego Ballivian. Turns out Ballivian ’83 had read the staff bio of the embassy’s incoming communications director, immediately noted their shared alma mater, and couldn’t contain his excitement. Of his enthusiastic introduction that day in the cafeteria, Ballivian says simply, “I guess it’s just that Denison spirit.”

From that memorable first meeting, Beamer and Ballivian have turned the embassy into an unlikely Denisonian stronghold. For Ballivian, Coordinator of Fulbright and Academic Programs for the U.S. Advisory Commission on Public Diplomacy, that outpost is a daily reminder of where he came from. A native of La Paz, he himself was awarded a U.S. Embassy scholarship more than 30 years earlier to attend an American university. “I was the first Bolivian at Denison,” he says proudly. He earned his master’s at Ohio State before returning to Bolivia in 1990; he landed at the embassy in 2001. Now, he works to find worthy students, often from Bolivia’s indigenous population, who might benefit from the same opportunity he had.

“We’re benefitting an entire generation here, students who are beginning to learn English, get access to scholarships,” he says. “We’re helping people who’ve been isolated, who haven’t participated in the political life of this country. It’s been a wonderful experience.”

Beamer’s still a relative newbie in South America, but the guy who says he “grew up in the middle of a cornfield in Findlay, Ohio” is no stranger to life overseas. After lettering in baseball and basketball at Denison, and a postgraduate Peace Corps stint in Mauritania, Beamer joined the foreign service in 2001 and worked as a press officer at various stops in Africa and Europe. He and his family—his wife, who also works at the embassy, and their 2-year-old twin boys—came to Bolivia last July, for what he expects to be a three-year stay.

Though their times in Granville were separated by a decade, Ballivian and Beamer are connected by shared experience — and shared impact. One came to Denison from a South American capitol, the other from small-town Ohio, but both took advantage of life-changing scholarship opportunities. Beamer cites professors like Don Schilling in history and Andrew Katz in political science for “breaking me out of the mindset that I was going to go to Wall Street and make my millions, so I ended up in a mud hut in Mauritania, exposed to things I would never have imagined.” For Ballivian, the leap from La Paz to Granville was a trip literally without precedent.

Beamer has spent a career in communications, so he might be accused of just doing his job when he says, “Diego is the real story here.” But there’s every reason to think he’s sincere; Ballivian’s story is a great one. “He’s the first guy from Bolivia who ever studied at Denison,” Beamer says, “and now he’s selecting and encouraging other Bolivians to study in the States.”

Indeed, Ballivian’s passion for his alma mater overlaps nicely with his work. He volunteers for the Denison Alumni Recruiting Team, and among the students he has recently worked with are “some really awesome Bolivian youngsters” who he hopes might end up in Granville. For Ballivian, it’s absolutely personal. “I identify with Denison so much,” he says. “From my experience, the host families, the cultural enrichment, everything. The emotional component for me is tremendous.”

And by now, they’ve worked together long enough that Beamer is no longer surprised by his co-worker’s displays of school spirit. When he’s at his desk, 4,000 miles from Granville, and “someone walks down the hall humming ‘To Denison,’” he no longer has to guess who it is.