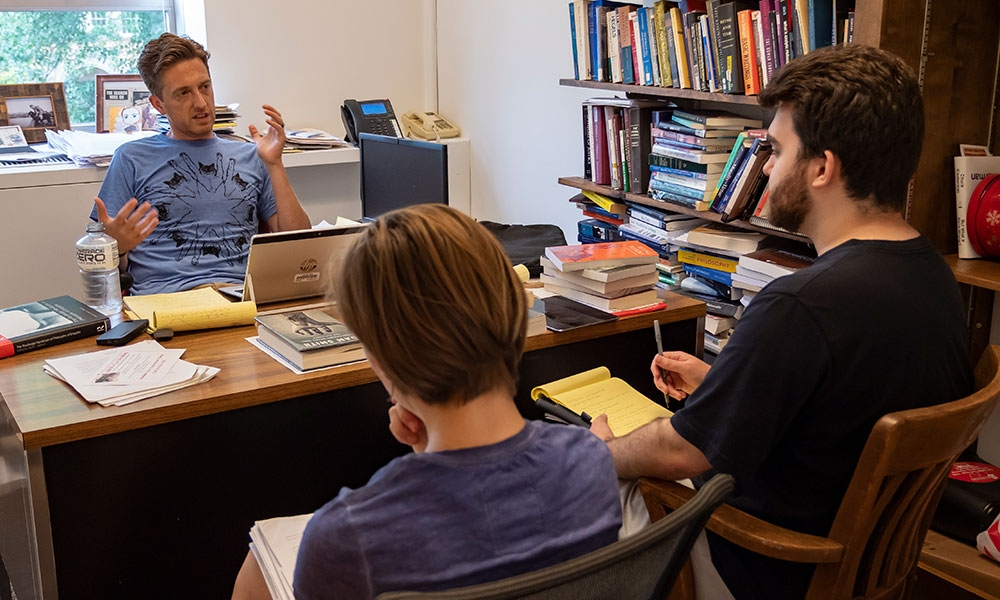 Is lying ok, if you’re just trying to avoid hurting someone’s feelings? When, if ever, is taking a human life justified?

Questions like these fall within the purview of ethics, the branch of philosophy that studies morality, or as we might think of it, the difference between right and wrong. But before questions like these can be dissected, you have to start at the beginning with meta-ethics, which looks at the foundations of morality itself.

Meta-ethics asks questions like: What is morality? When we make moral judgments, what are we doing? Are we reporting a moral fact or are we merely expressing a feeling we have?

Benjamin Keefer ’19 and Audrey Kirkley ’20 jumped at the chance to dig deeper into questions like these during their summer 2018 research project with John McHugh, assistant professor of philosophy.

“Taking ethics with Dr. McHugh in my spring semester changed the way I think about problems and morality and, ultimately, led me to become a philosophy major,” Kirkley says.

Keefer and Kirkley worked together on a difficult question. In fact, McHugh admitted that with regard to this project, “questions about the meaning of life may be easier to explain.” Essentially, Kirkley and Keefer were to determine if moral naturalism is defensible, even if it implies externalism.

So, what does this mean?

In philosophy, moral naturalism is the belief that moral facts play by more or less the same rules everything else does; thus, the moral naturalist believes that moral facts, in principle, could be studied by science. And an externalist thinks that it is possible to make a moral judgment and not care or be motivated by the results. Since it seems that one can grasp any natural fact and not thereby be moved to do anything, it seems that naturalism implies externalism. But while many philosophers are attracted to naturalism, some find externalism objectionable.

“Ben and Audrey defended naturalism by defending externalism, particularly against objections leveled by a philosopher named Michael Smith,” explained McHugh. “Smith’s objection is that if you are externalist and you think that moral judgments don’t necessarily motivate, then you still have to explain why judgments often do.”

McHugh helped narrow the students’ focus into workable questions for the summer project. Once they got there, they researched various opinions and writings on their own.

The two settled on the position that moral judgments themselves aren’t inherently motivating, thus defending externalism. Instead, they motivate by virtue of another factor. For example, the judgment that murder is wrong isn’t enough to motivate a person to not commit murder. But then if that person has empathy for other people, that might motivate them to act on the judgment.

“I really focused on empathy being a link between judgments and motivation, but with the added detail of reflection and self-governance being used to connect empathy with the judgments,” Kirkley says.

Neither Kirkley nor Keefer necessarily arrived at a definitive answer to their questions. They just asked better questions or, in this case, formed better arguments.

“What’s cool about summer research is that it is student-generated,” McHugh says. “It’s different because you really are doing something that the students are independently interested in and you’re helping them nurture and cultivate that interest.”