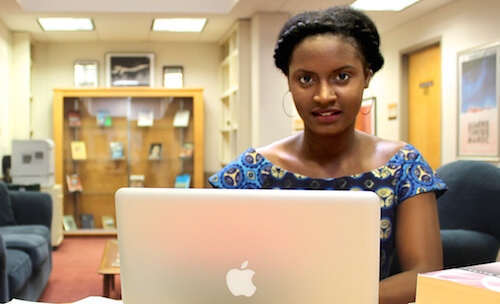 When Hali Bah ’18 researched the role of French language in the culture and politics of Guinea, she was studying her own history.

Halimatou “Hali” Bah ’18 knows about the power of language. “Language is very important to a given person’s culture. It’s how you learn about your moral values, your ancestral history. Everything is linked to language.” With a background that spans the Atlantic Ocean, Bah questioned how colonialism affected her first language, Fulani, in a 2016 summer research project under the direction of Professor Isis Nusair.

“How come when I’m speaking my own language, I feel like I’m speaking French?” Bah answers when asked about the origin of her research. “There has to be something institutional that causes this.”

Bah’s interest in language and identity started at an early age — she was raised in a multilingual household. “I learned Fulani as my mother tongue. I learned French while going to school in Guinea. And I still learn French as an international studies [International Studies] and French double major.”

Each section of her project covers one of three eras in Fulani history. “The first looks at Fulanis prior to French colonization, the second talks about the changes that were made by the French during the sixty-year colonization period and the last section examines 1958 to the present,” said Bah.

Bah’s research began in the same place of her initial interest in language, her homeland of Guinea, where she studied as part of her summer research program. During her time in Guinea, Bah collected coursework that teachers assigned to their students and compared it to the educational systems that were in place before the French occupation.

“Bah discovered the power of connecting her personal story to her research in language and culture.”

Her own multicultural identity informed her research, and Bah found that her experience of the predominance of the French language is not an isolated one in her culture. It has been institutionalized throughout the Guinean education system.

Bah saw this firsthand while conducting her research. “Teachers are very reluctant to teach native languages, and French is the official language of Guinea,” said Bah.

This focus on French has not always been the case for education in Guinea. “The education prior to French colonization was very much about the Guinean people. They were taught in their own language, French was not imposed then. Now, academically, French is at the top of the hierarchy, and everyone is trying to obtain it.” explained Bah.

Her research explains the changes that French colonists made to the Fulani language and educational system. Bah uses personal experience and draws on academic work and comparative studies that cover this topic to strengthen her case for native language education.

Nusair believes that Bah is personally invested in this research project, “What I think is also important is that before this summer, she hadn’t been to Guinea in 11 years. We talk about that in her research. What it means to be from there and to do her research at Denison, the multiple locations that she is a part of and how that shapes her own thinking about the topic.”

Bah cites some of the effects of French colonization by explaining her own experience, “So much of the language has been lost. It is hard for me and people my age to speak Fulani without incorporating French words. The written component has been completely lost.”

She talks about her own experience with postcolonial education. “Before this project I didn't know where the Fulanis lived prior to colonization, or their history. And I’m proud to be Fulani.”

Bah’s ultimate goal is that her research can be a launching pad for other academics to become invested in preserving all native cultures — not just Fulani. “While I’m just focusing on Fulani, what about Malinké? What about the Sousou language? The contexts are slightly different but the repercussions are the same.”