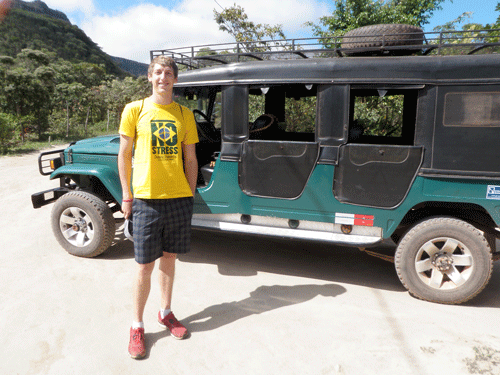 "To capture my experience in Brazil with only a few short lines is a disservice to how informative my experience was to my life today." Eric Fisher '14

When studying abroad, International Studies students are forced to immerse themselves in a completely different and unique culture than the one they are usually accustomed to.

Olivia Underwood '14: Ireland
“As a junior I spent a semester interning the oireachtas in Ireland. I got, not only real world experience helping the chair of the finance committee prepare for meetings (as well as shredding and keeping track of his glasses), but also met students who were passionate in the same directions as me. It was a once in a lifetime opportunity and experience.”

Ashley Holland '14: South Africa
“I studied in Cape Town, South Africa when I was abroad. I went through the SIT: Multiculturalism and Human Rights program, and during my time in South Africa, I lived with four host families that represented different racial, ethnic, and socio-economic classes within the country. I also spent my last month living with friends from my program and completing an internship with an NGO, Equal Education, that works on pressuring the government into providing quality education for all South African children.”

Brenda Falkenstein '14: Russia
“I'm a senior and going to be getting my MA in Security and Diplomacy at A&M's Bush School. And here's some pictures from my study abroad in Copenhagen with DIS. Studied EU politics and visited most of the EU institutions in Brussels, and even traveled to Russia with a class taught by one of the translators between Putin and the Queen of Denmark.”

Eric Fischer '14: Brazil
“To capture my experience in Brazil with only a few short lines is a disservice to how informative my experience was to my life today. However, one particular anecdote is pretty helpful in describing my experience. While spending the summer of 2013 living in Salvador, Brazil, the capital city in the Brazilian state of Bahia, I was lucky enough to befriend a fellow competitive swimmer, and because of that, I could attend the Campeonato Bahiano, or the Bahian State swimming championships. At this meet, I had the opportunity to sit down with my friend and discuss how swimming had impacted his life, as it had always played such a large role in mine. In this conversation, conducted almost entirely in Portuguese, I began to notice the role that sport could play in educating people and building communities. I noticed this primarily because of the way he discussed his experience of swimming in Brazil and how much different it was than my own. He said a lack of public pools made the cost of swimming about 170 Reals (roughly 85 US Dollars) per month, and there were no university-organized sports whatsoever.

Luckily, my friend’s swim coach gave him the opportunity to swim free of charge. While my friend admitted he was lucky, and that swimming had educated him with invaluable and employable skills, he wished he, and others like him, had easier access to sports because of the way it had educated him and limited his chances of a life in poverty. This conversation made me realize that I had often taken the access to those skills given by sports for granted, and it made me wonder why people in Brazil, such as my friend, did not have the same ease in accessing these skills. This inspired me to investigate if sports-based NGOs (Non-Governmental Organizations) could effectively reduce poverty, as my friend suggested, by providing access to sports centered education.”