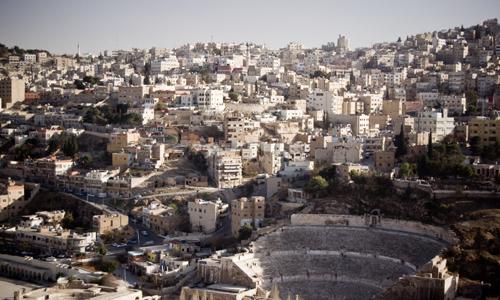 During the summer following her first year at Denison, Mary Ann (B.A. '06) worked as a volunteer teacher in rural northern Thailand, in a school where four languages and a variety of nationalities merged.

Mary spent the year after she graduated in Bern, Switzerland, on a Fulbright research fellowship, studying the historical context of Amish separatism.

Her weekly newspaper column was recently published in book form, CH is for Chocolate: Individually Wrapped Tastes of Switzerland.  She taught English at the Amman Baccalaureate School in Amman, Jordan. She received a Masters in Public Policy from the Goldman School of Public Policy at the University of California, Berkeley. She is now a policy manager for J-PAL, the Abdul Latif Jameel Poverty Action Lab at MIT.

During the summer following her first year at Denison, Mary Ann (B.A. '06) worked as a volunteer teacher in rural northern Thailand, in a school where four languages and a variety of nationalities merged. Returning to Denison, she wove an interest in language issues and education into her two majors, International Studies and English Literature. In founding the recruitment campaign for Teach For America at Denison, she supplemented her interest in international educational issues with a concern for the educational challenges facing the United States. Drawing from her background in Ohio's Amish community and her fluency in German, she also created an interdisciplinary Honors senior research project on language and identity in Amish schools. Delving into interviews with educators in this unique linguistic minority led to her interest in applying for a Fulbright Research Grant to Switzerland for 2007-2008.

When she had studied abroad in Giessen, Germany during the spring semester of her junior year, she investigated potential spots for further research on the historical context of Amish separatism. Identifying Bern, Switzerland as a key location during the emergence of the Amish from the Anabaptist movement, she prepared a proposal highlighting the need to study Amish educational and separatist practices in their historical context.

Her time in Bern coincided with a “Year of Anabaptism” which sought to bring the history of this religious minority into Swiss public dialogue. During the year, Mary Ann was able to share her current and past research, as well as her personal reflections on America's Amish communities, which fascinated the local media and led to a number of newspaper articles about the young American who grew up speaking a hybrid Swiss German language in the US. Appreciating the Fulbright Foundation's goal of fostering mutual understanding between countries, Mary Ann also wrote a weekly column about her research and her exploration of Switzerland for The Budget, a US newspaper with a national subscription among historically Amish and Anabaptist communities. Upon her return, a collection of the columns was published in CH is for Chocolate: Individually Wrapped Tastes of Switzerland. She spent her free time practicing Bernese Swiss German with anyone who would tolerate her efforts, training for a marathon, and hiking in the spectacular Bernese Alps.