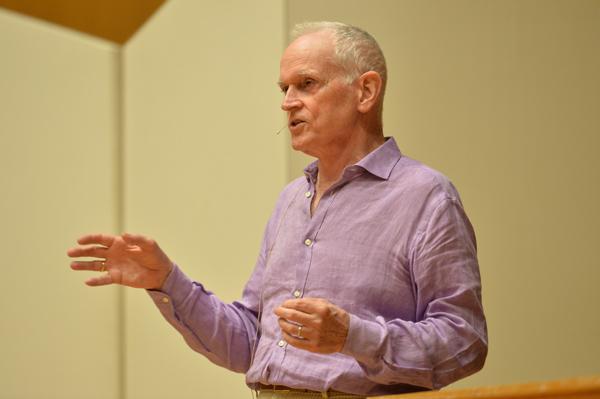 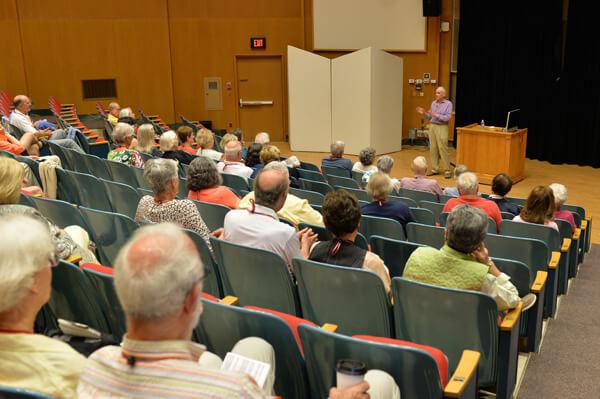 As students work this week at the annual Jonathan R. Reynolds Young Writers Workshop, we take a look at the career of the writer who brought it to life.
View Photos »

Every summer, promising high school writers show up on campus to take part in the Jonathan R. Reynolds Young Writers Workshop with Denison faculty and staff in the English department. We’ve written about the program before, which brings in accepted students for eight days of workshops and critiques, but we’ve never written about the man behind it, Jonathan Reynolds himself, Class of 1965, whose $1.75 million endowment made possible a playwright-in-residence position, a distinguished professorship, and this writing program, which has helped launch young writers for more than two decades.

Reynolds was on campus recently for his 50th Reunion, and storyteller that he is, he held a session for classmates to share with them stories of his career and all the winding paths that led him to the writing world.

It started with a failed attempt as an understudy in a 1967 production of Rosencrantz and Guildenstern Are Dead. (He didn’t ever actually have to go on stage, he told the crowd, but was close enough that it showed him he didn’t want to be there.) He then ventured into politics with the presidential campaign for Senator Eugene McCarthy before becoming a talk-show producer for The David Frost Show and The Dick Cavett Show.

When Reynolds left Cavett’s show, he wasn’t sure what to do, so he came up with a new plan. “I did what all smart people on the cusp of failure do,” he said. “I wrote a play about failure.”

The play, Yanks 3 Detroit 0 Top of the 7th, was soon followed by another called Rubbers, a one-act piece about contraceptive issues, which was staged at the American Place Theatre in New York City in 1975, and got the attention of Francis Ford Coppola. He called Reynolds with an idea: Coppola wanted to make a film about the Vietnam War, and he wanted Reynolds there to document it for a book.

So Reynolds found himself in the Philippines taking detailed notes on the making of Apocalypse Now and the struggles the movie faced before it ever got off the ground: a rejection of the lead role by Al Pacino; a need to replace their second choice of Harvey Keitel with Martin Sheen; monsoon season; and the typhoon that wiped out the sets. “After three months,” Reynolds told his classmates, “we had about six minutes of film in the can.”

Reynolds just couldn’t go back. “So I did what I did before,” he said. “I wrote a play.” This one was called Geniuses, a satire about the movie business that bore quite a resemblance to the goings-on on the set of Apocalypse Now. “When Francis heard about the play,” he told the crowd in Herrick Hall during Reunion, “Francis was furious.”

Over the years, Reynolds would write more than 10 plays — all produced in New York City — including Stonewall Jackson’s House, which was nominated for a Pultizer, and Dinner With Demons, which called for a five-course meal to be prepared onstage. (The latter is an autobiographical tale, and a nod toward Reynolds’ love of food — he did, after all, write a food column for The New York Times Sunday Magazine for six years.)

But Reynolds’ relationship with the big screen also spurred a flop. When Leonard Part VI hit theaters, its star, Bill Cosby, made the talk-show circuit asking people not to go and see it. Roger Ebert called it the worst movie of the year. “It was a very stupid movie,” admitted Reynolds to a laughing crowd. “The script wasn’t very good — mea culpa.”

Leonard Part VI aside, there are plenty of glorious moments in this writer’s career, including Rockefeller and Guggenheim Foundation grants and The Dramatists Guild Flora Roberts Award for Sustained Achievement. It just goes to show you, he told his fellow ’65ers, “Those things that are destined for greatness, and those destined for failure don’t always turn out the way you would expect.”

A lesson he would likely pass on to any young writer these days.