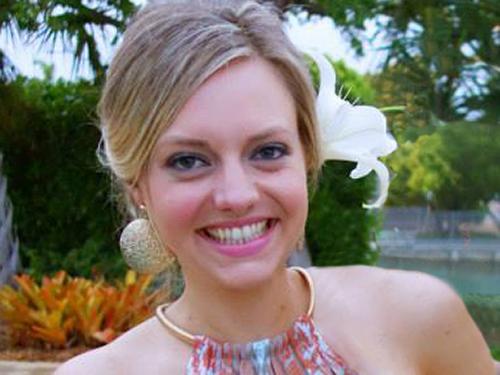 Lindsey Miller ’06 is an anthropology grad student at the University of Denver, and this winter she was part of a team that created an important exhibit at the university’s Museum of Anthropology.

“Living With the Memory: Rwanda Twenty Years On” explores the Rwandan genocide 20 years after a 100-day rampage during which an estimated 800,000 people were killed.

According to the University of Denver Magazine’s website, Ermitte Saint Jacques, a lecturer and postdoctoral teaching fellow in the Department of Anthropology, served as faculty adviser and lead researcher for the exhibit. Three anthropology graduate students, including Miller, assisted with the research and designed the exhibit, which enlisted photos and text to show the genocide’s long-lasting and far-reaching toll.

In conceptualizing the exhibit and in deciding what to display and how to display it, the grad student team opted to forego artifacts, such as a machete used in the killing, and to rely on photographs and text instead. As Miller told the magazine just before the exhibit opened, “We didn’t want to use anything graphic because we are going to have survivors there.”

To create an appropriate mood, the magazine reported, the team opted to paint all the exhibit walls but one a dark gray. “We wanted it to be a somber, contemplative space,” Miller said. They also wanted the show to end on a brighter note, and with that in mind, the final display is anchored against a bright white wall.

“At the end,” Miller told the magazine, “we have a little time about what is genocide and what is happening today. That space also has uplifting messages. Rwanda today is in much better shape than people anticipated it would be.”

A story about the exhibition also appeared on Colorado Public Radio. To read the full story in the University of Denver Magazine, go to: blogs.du.edu