Penny for Your Thoughts

Vogel will be teaching a course about Marx during his last semester at Denison. The Karl Marx piggy bank on his file cabinet draws the attention of visitors but most don’t get the “Das Kapital” joke. Every once in a while, someone will drop some coins in it. Donations are welcome, comrade. 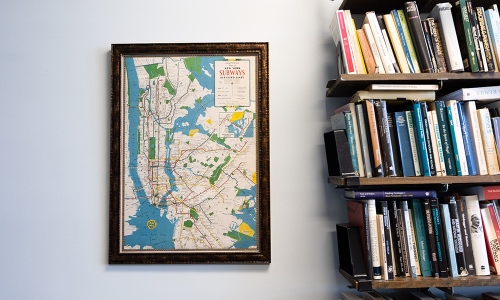 Vogel grew up in New York city and spent his whole life on the East Coast until he moved to Granville. He’s a little mortified that most New Yorkers, at least at the time, didn’t know where Ohio was. When he first moved here, his parents were going to drive out to visit him. His father called and asked, “So are there going to be places to get gas along the way?” Vogel misses plenty of things about New York and has a particular affection for the city’s subways. If there was one thing he could bring to Ohio, it would be underground transportation.

When Vogel first came to Denison, his colleague Tony Lisska picked him up at the airport and drove him to campus. Lisska took a beautiful route, on a road Vogel’s never been able to find again. But he remembers looking at the rolling hills and rural setting and thinking, “Oh, I can live here. This seems like a good idea.” Years later Lisska went to Vogel’s alma mater, Yale, for an event and brought back a mug for him, which still sits on his desk.

Nested around the room, tucked in his cupboard, in banker boxes and on the shelves are papers and books that Vogel has accrued over his career. Vogel keeps his materials, from his early days as a graduate TA up to the current semester, within reach. The paper in his office tells the story of his career — including books and articles he’s saving to read in retirement.