Every once in a while as students were wrapping up final exams and projects in April, they’d catch a glimpse of a couple of guys walking around campus snapping photos. With the help of a campus guide, Howard Korn and Chris Myers made their way into classrooms, residence halls, and the Roost, trying to document the Denison experience in pictures. They watched the Homesteaders garden, chop wood, and make dinner. They saw dancers and singers, scientists and artists. And all the while, they clicked away.

The professional photographers are not new to this kind of gig. In fact, they’ve traveled to college campuses all over the country on similar assignments, and they can attest that no two schools are alike. But there is one similarity among college students in general that Korn is noticing more and more. They just love to have their photos taken. “I’m convinced it’s about social media,” says Korn. “My theory is that this generation of students is so used to sending their own pictures to people through email, Facebook, and Twitter, that they’re comfortable with their images being out in the public.” Ten years ago, he says, that was definitely not the case. “They went from not wanting to be on the pages of anything to wanting to be on the cover of everything.”

Denison students were no exception. On the following pages, Denison Magazine shares some of the images taken during the four April days that Korn and Myers were on campus, and Korn tells us, in his own words, what Denison looks like to a couple of outsiders. 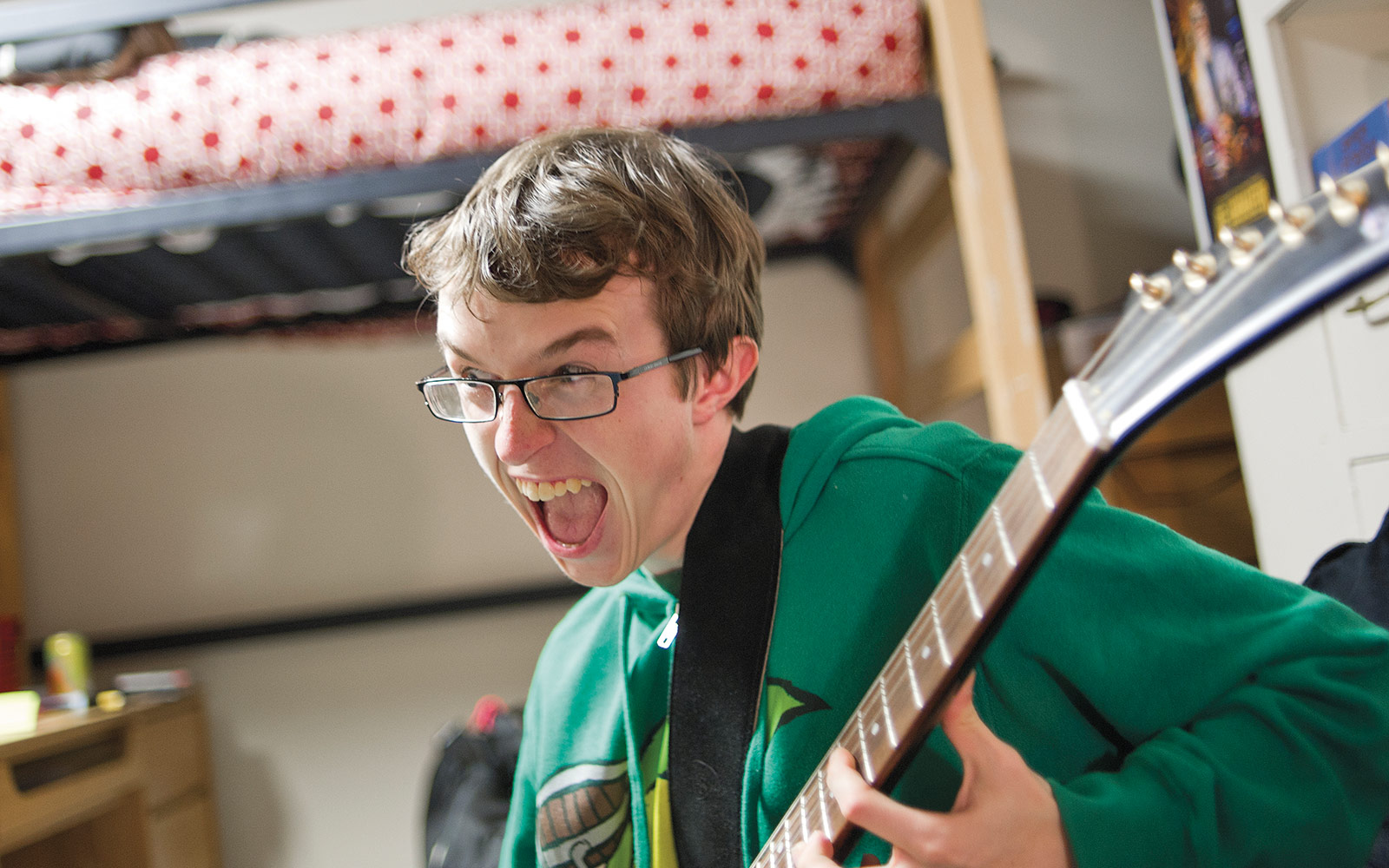 This student just wanted to yuck it up. There was no coaching here. I asked, "What do you do?" He said, "I play guitar, and I use the bathroom." He just pulled out his guitar and started making the Gene Simmons face. Definitely a ham. I thi… 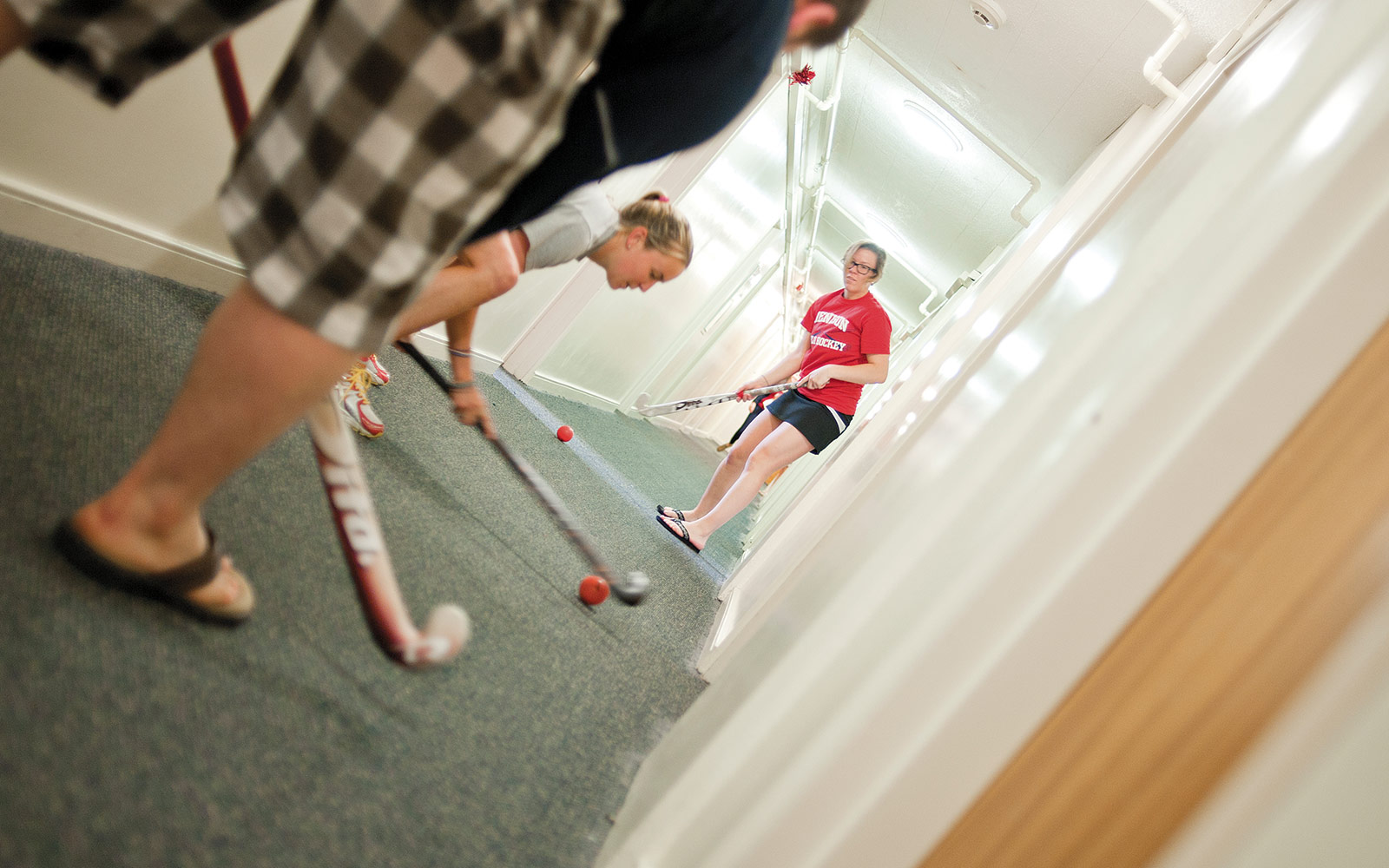 On this particular floor, there were a lot of field hockey players. I asked what they did for fun, and they said, "We play field hockey in the hallway all the time!" 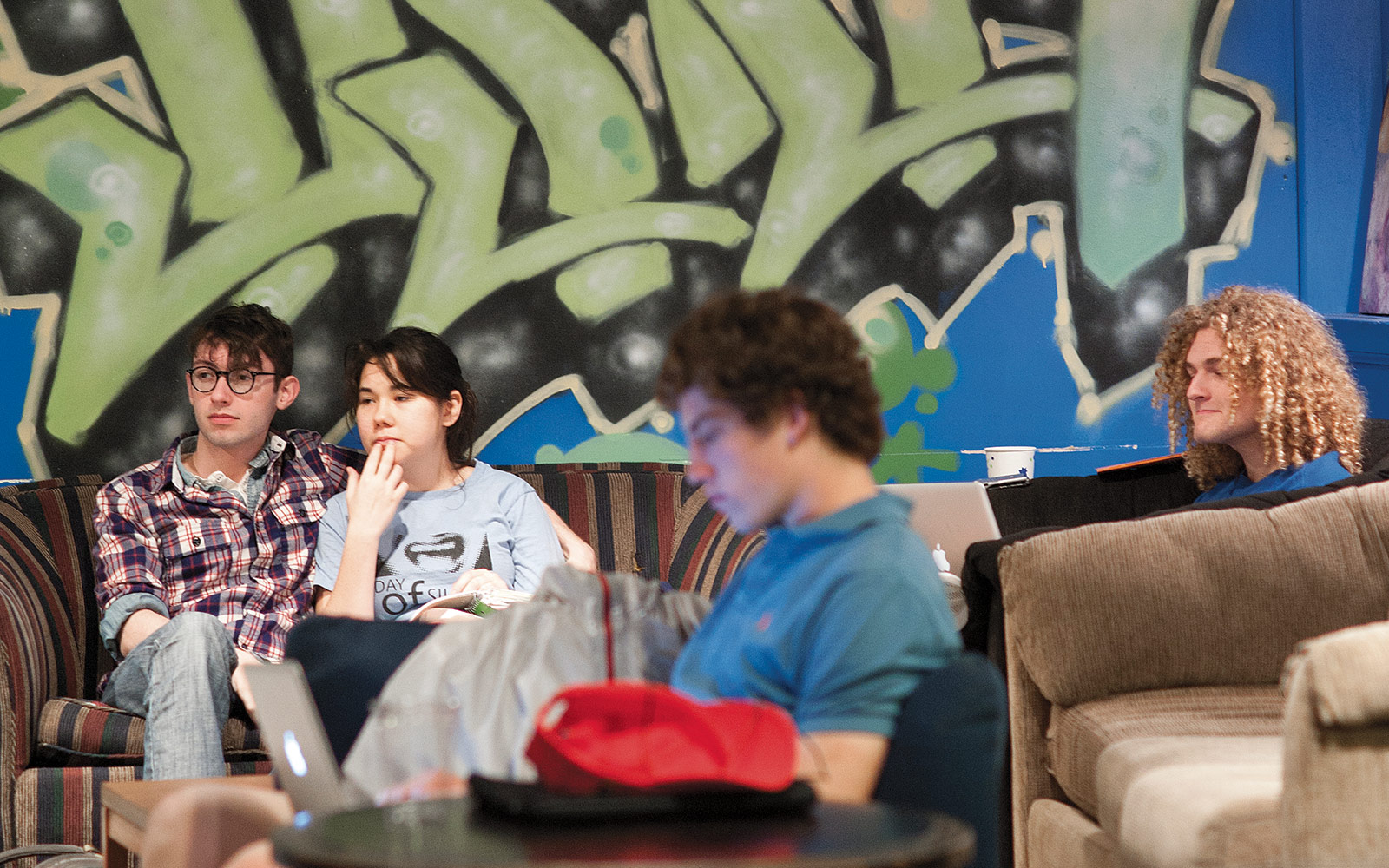 I think it's really nice for perspective students to see that you don't always have to go to the student union to get your coffee or to see a jazz band... it's nice to have a space like the Roost. Some place that feels a little less college… 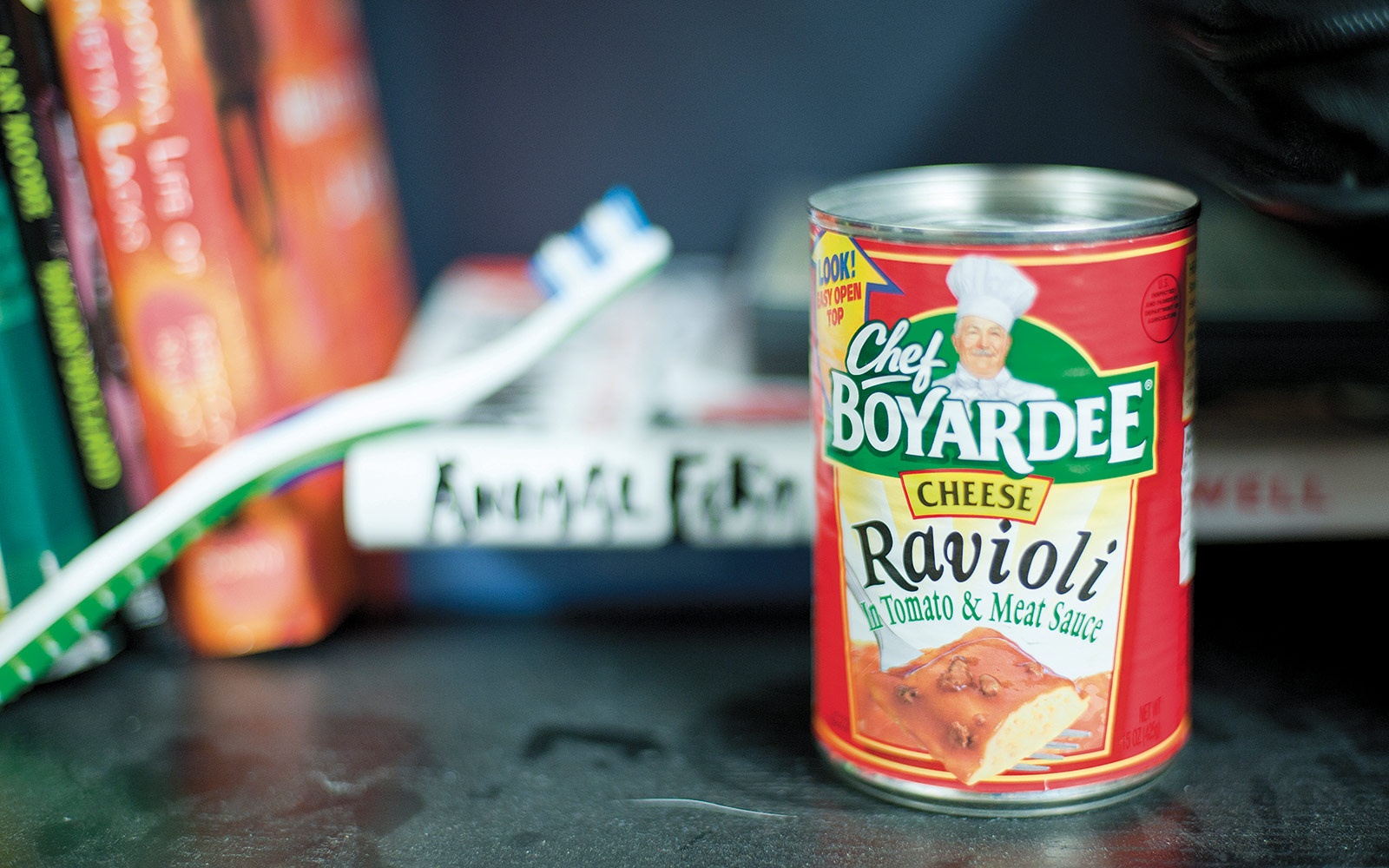 Here's a detail that you can find at most college campuses: the dusty residence hall shelf with random combinations of objects, like a toothbrush and some ravioli. 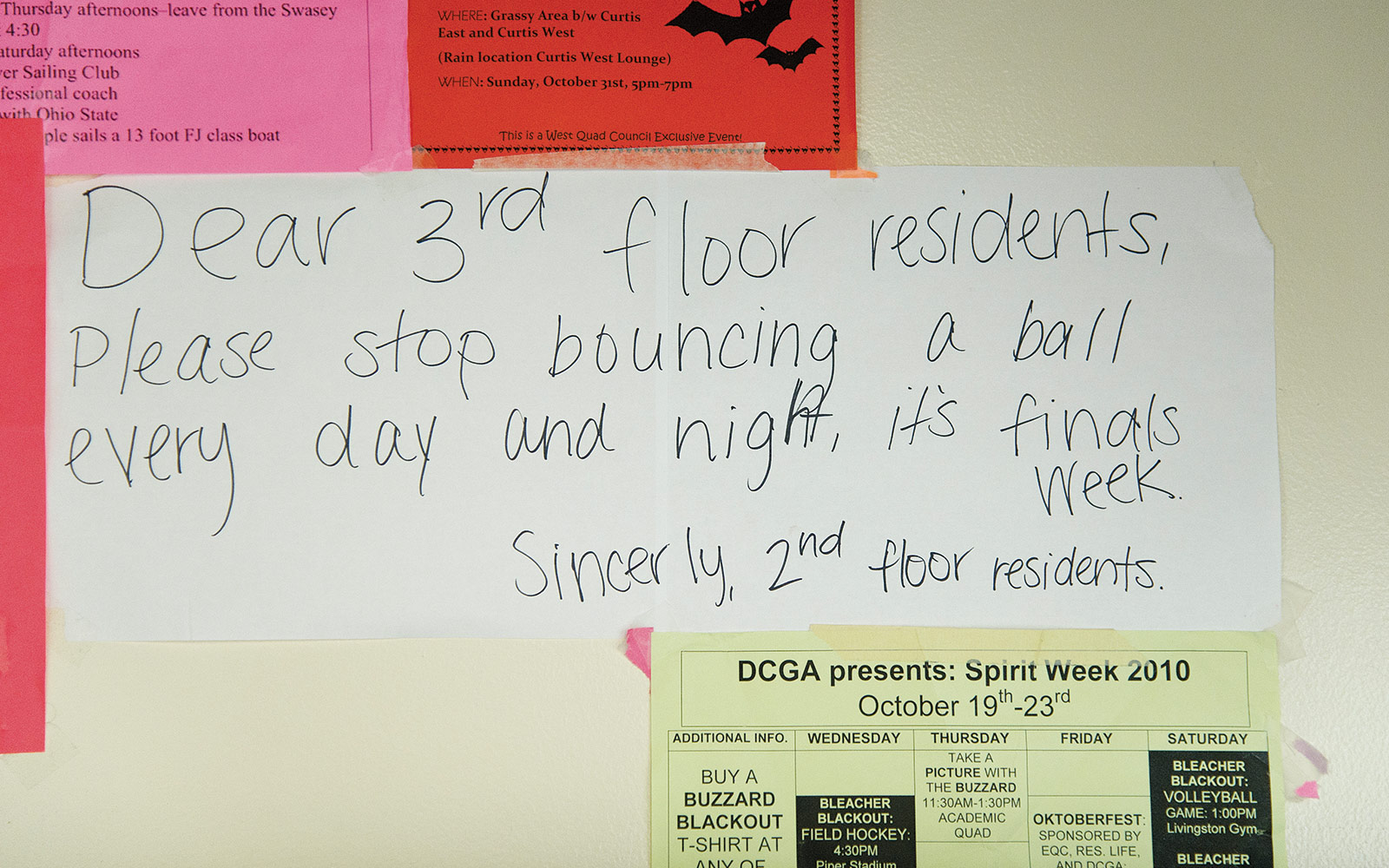 This was a sign actually in a room off the hallway where they were playing field hockey. It seems the students on the 2nd floor weren't as into field hockey as the 3rd floor residents. 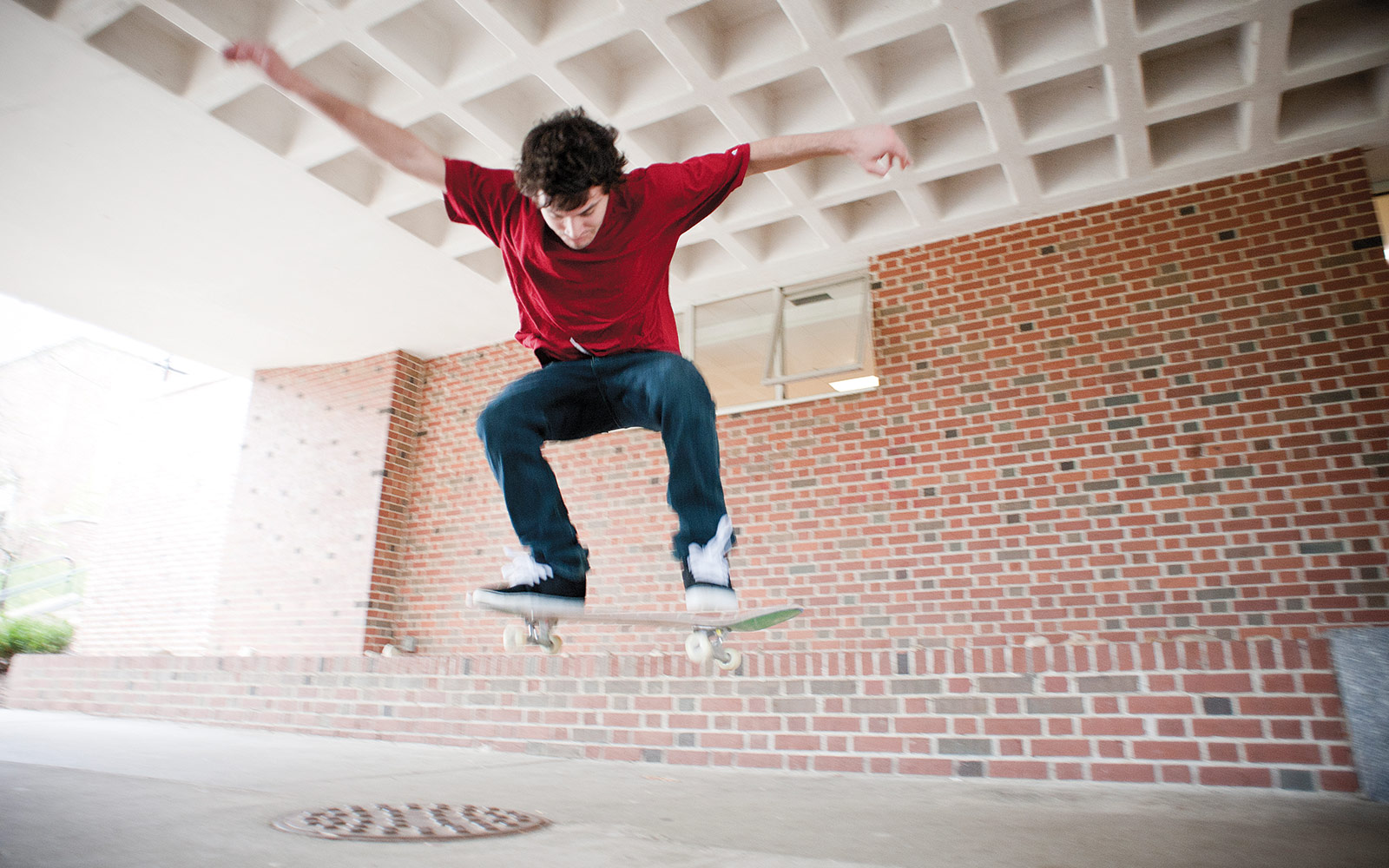 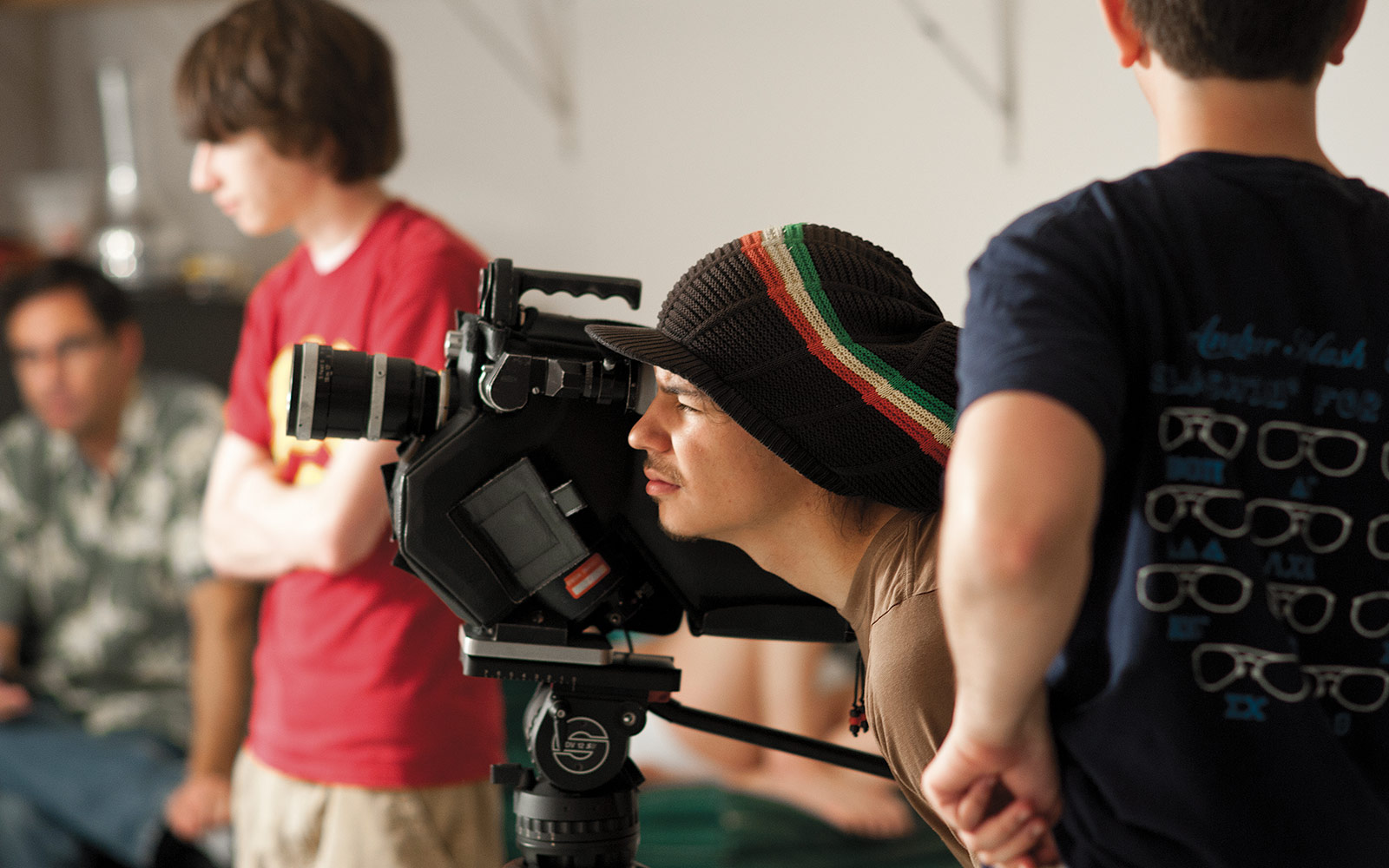 I know film has become a very popular major at Denison. I tried to snap shots when they weren't actually filming because of the sounds my camera makes. They were crunched for time and didn't talk with me much. They had to get out of there b… 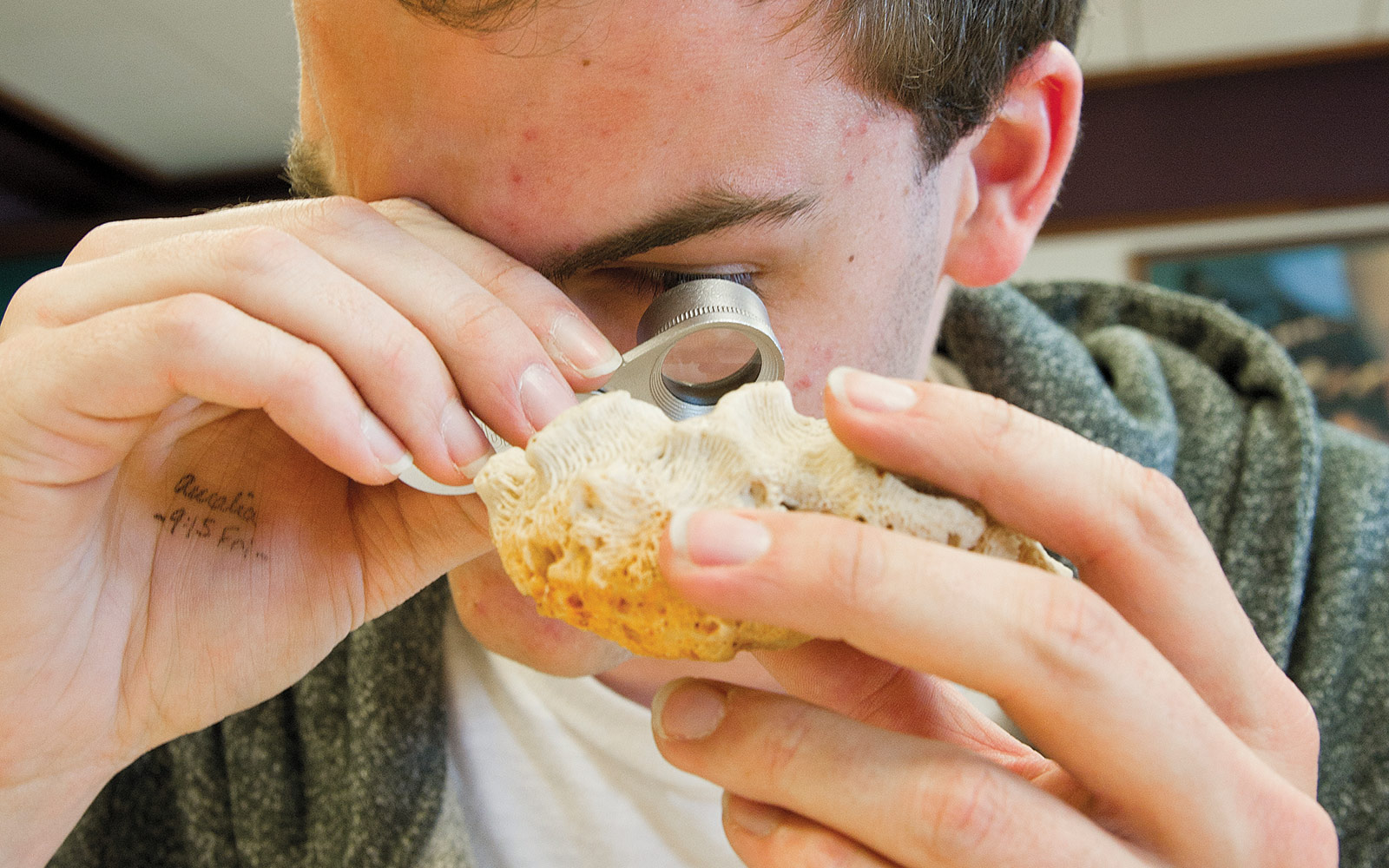 Students in this class were looking at fossils and then drawing detailed pictures of them. One of my favorite things about this shot is that, with all the gadgets they have these days, college students are still writing reminders to themsel… 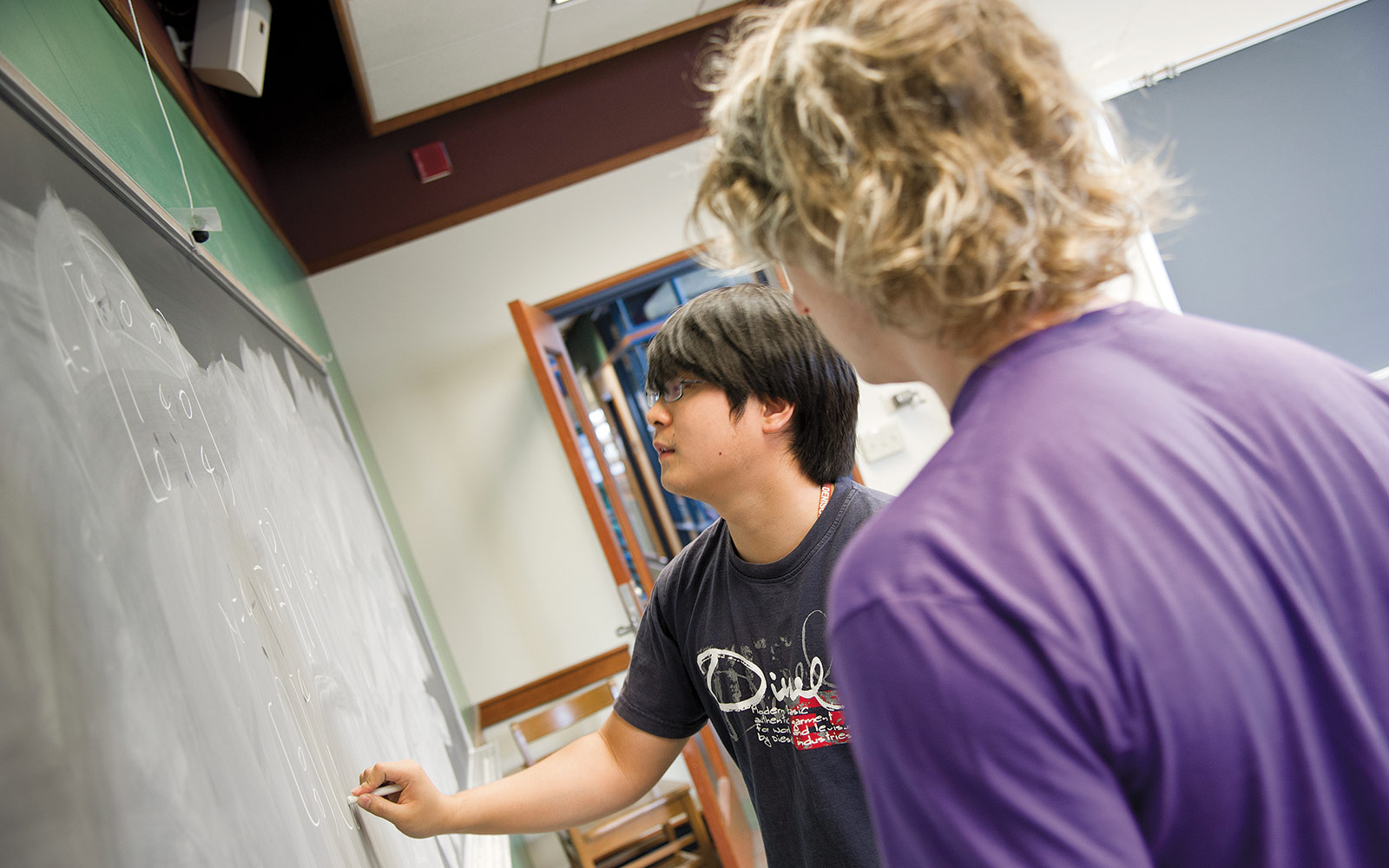 I found these guys working on a huge math equation during their lunch break. They said they just do this for fun. I looked at the equation, and of course it meant absolutely nothing to me. It was almost the length of the blackboard. 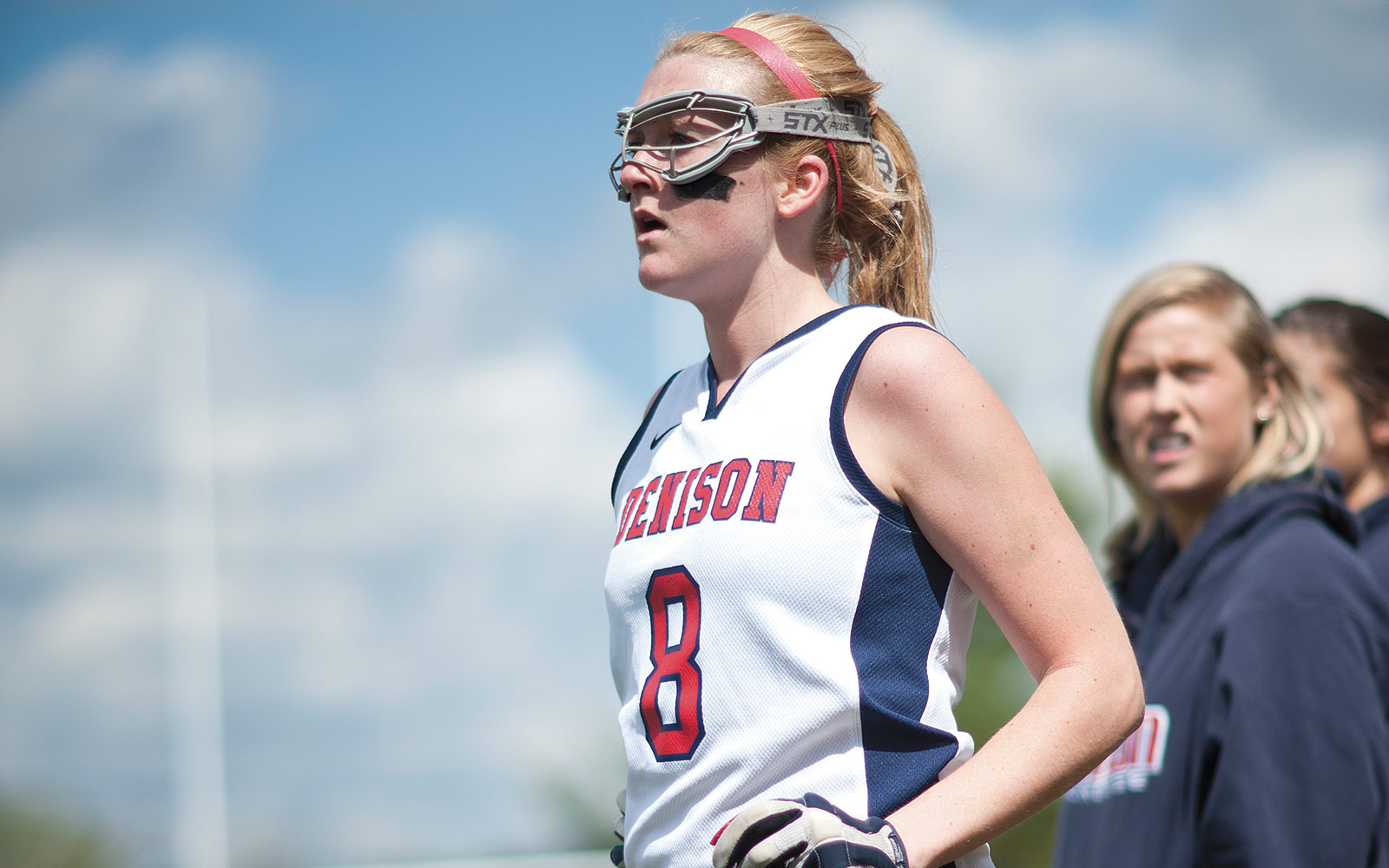 When I shoot sports, I don't necessarily focus on the sport itself. Sometimes the looks on the players' faces say more. 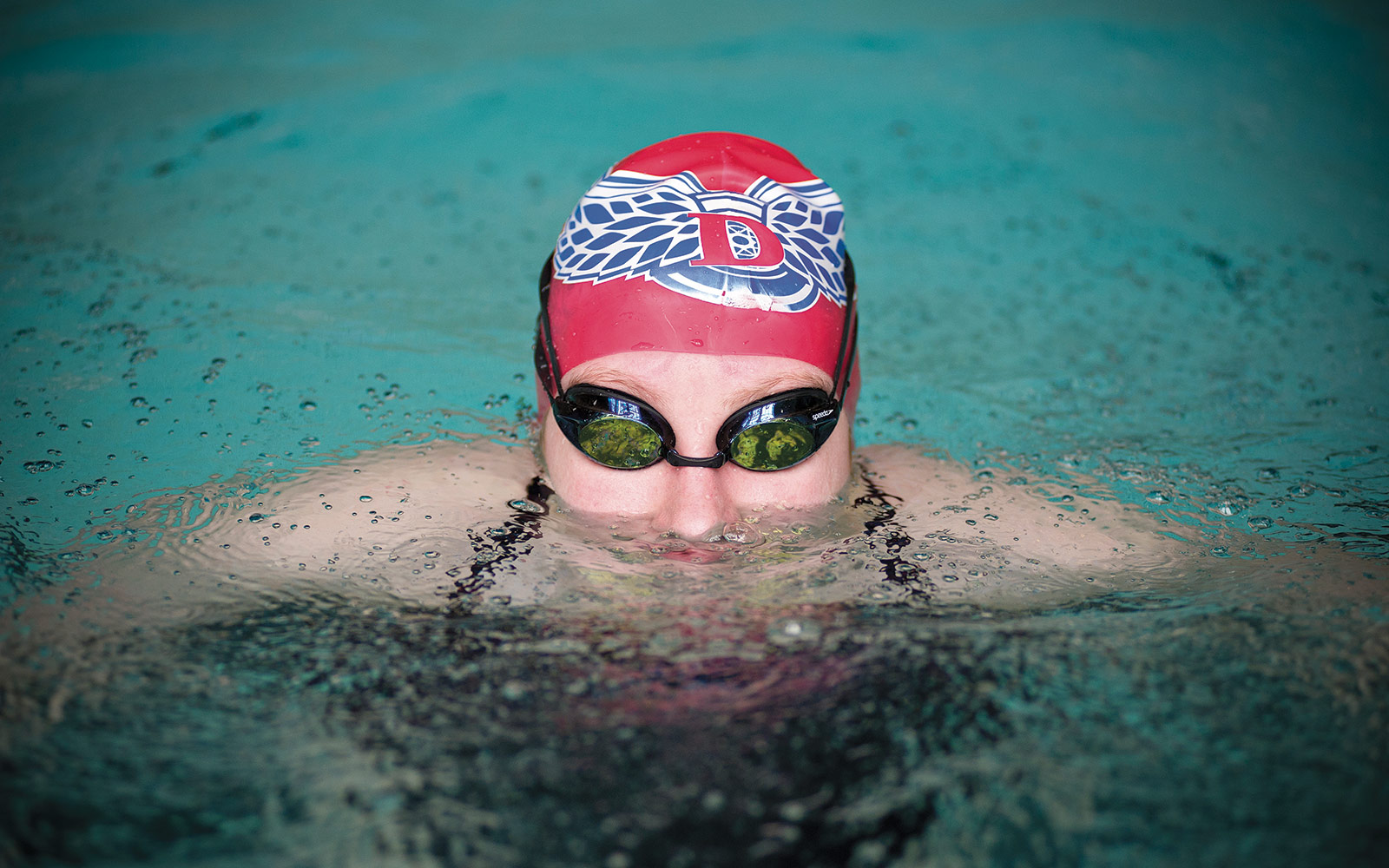 This swimmer is a woman who approached me about photographing her and her teammates. She saw me walking around campus and said, "You know, we finally beat Kenyon. You should take some pictures of the swimming and diving teams." 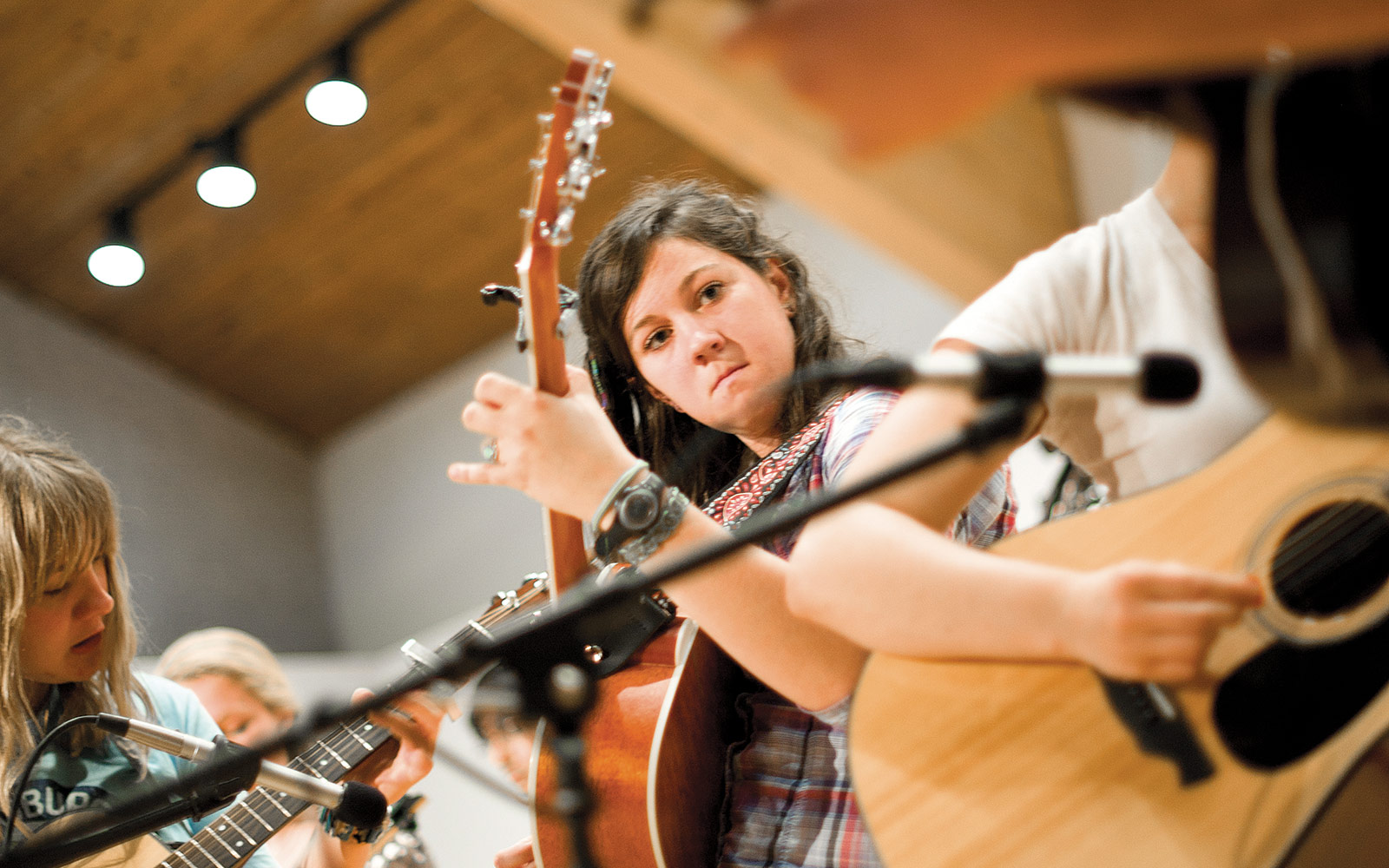 The bluegrass students were practicing for a performance. Watching them rehearse would definitely be among some of my favorite parts about the Denison shoot. Hearing them really made me think, "Wow, there is cool stuff going on here." 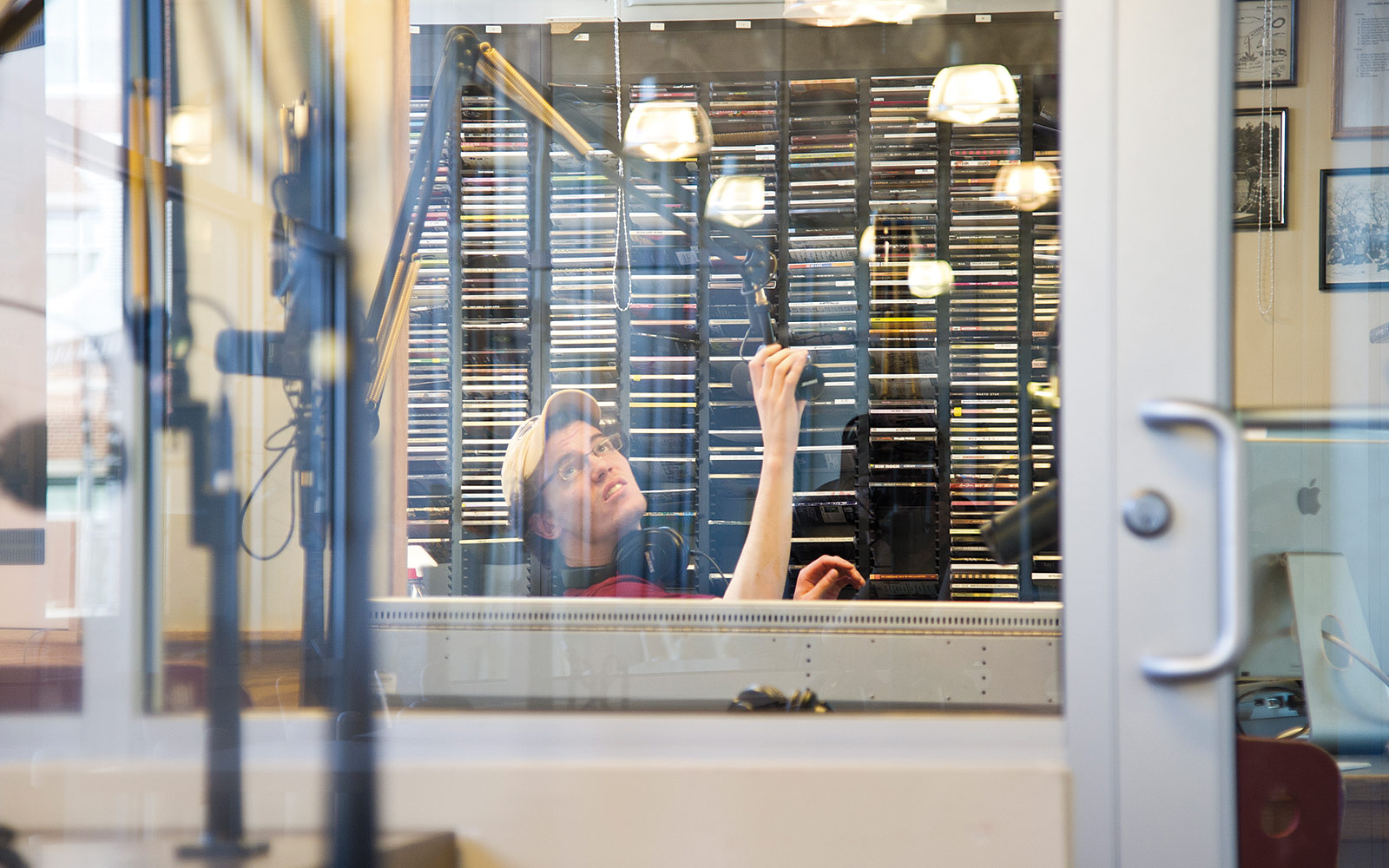 I was just walking around campus and saw this D.J. in the booth. I think he was pretty psyched to be photographed. He gave me the thumbs up, and I kept firing away. 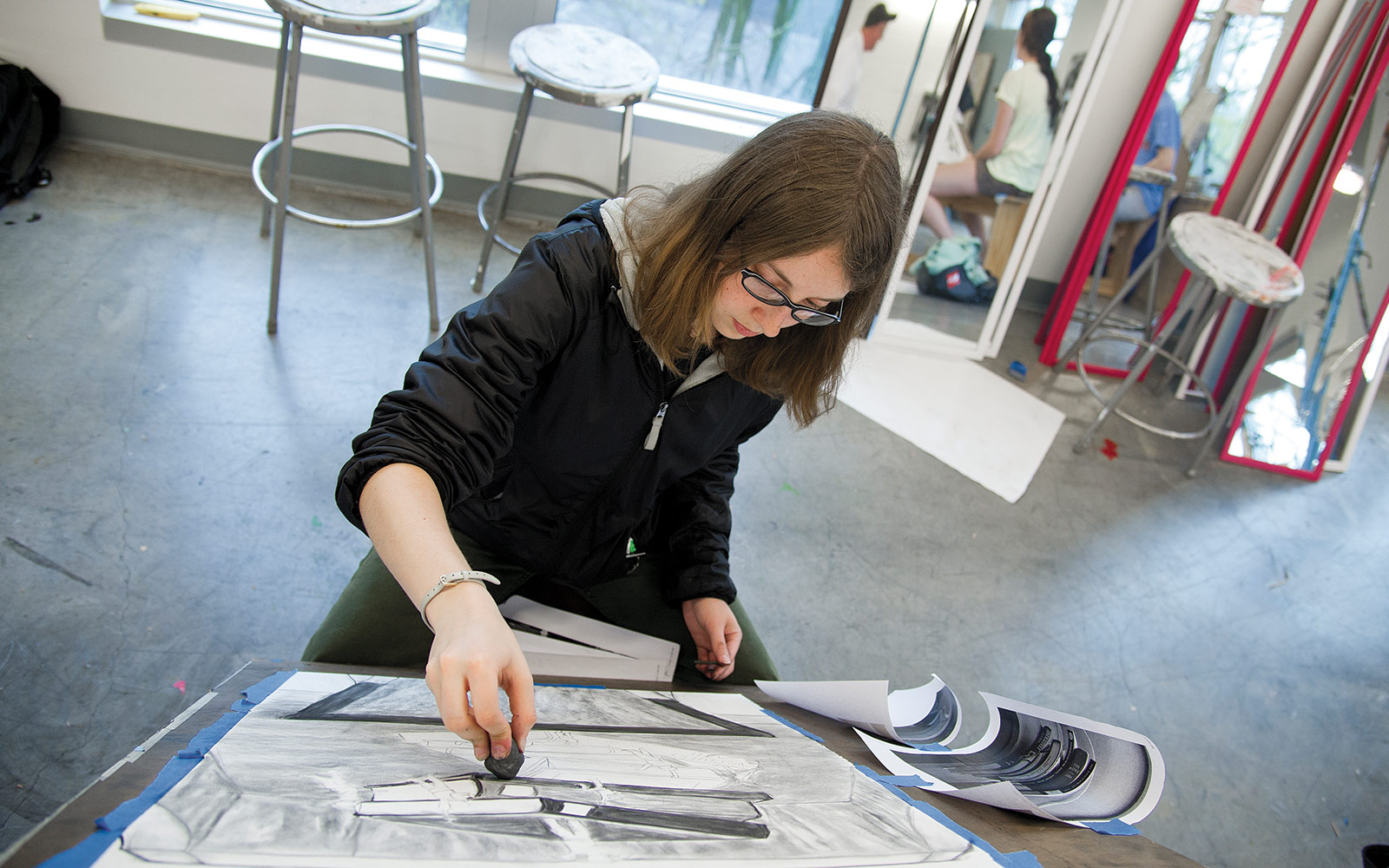 There always seems to be something going on in art buildings. Art is also a great thing to photograph because you get a nice general shot - the girl doing the charcoal drawing with the mirrors and the stools - and then detail shots are grea… 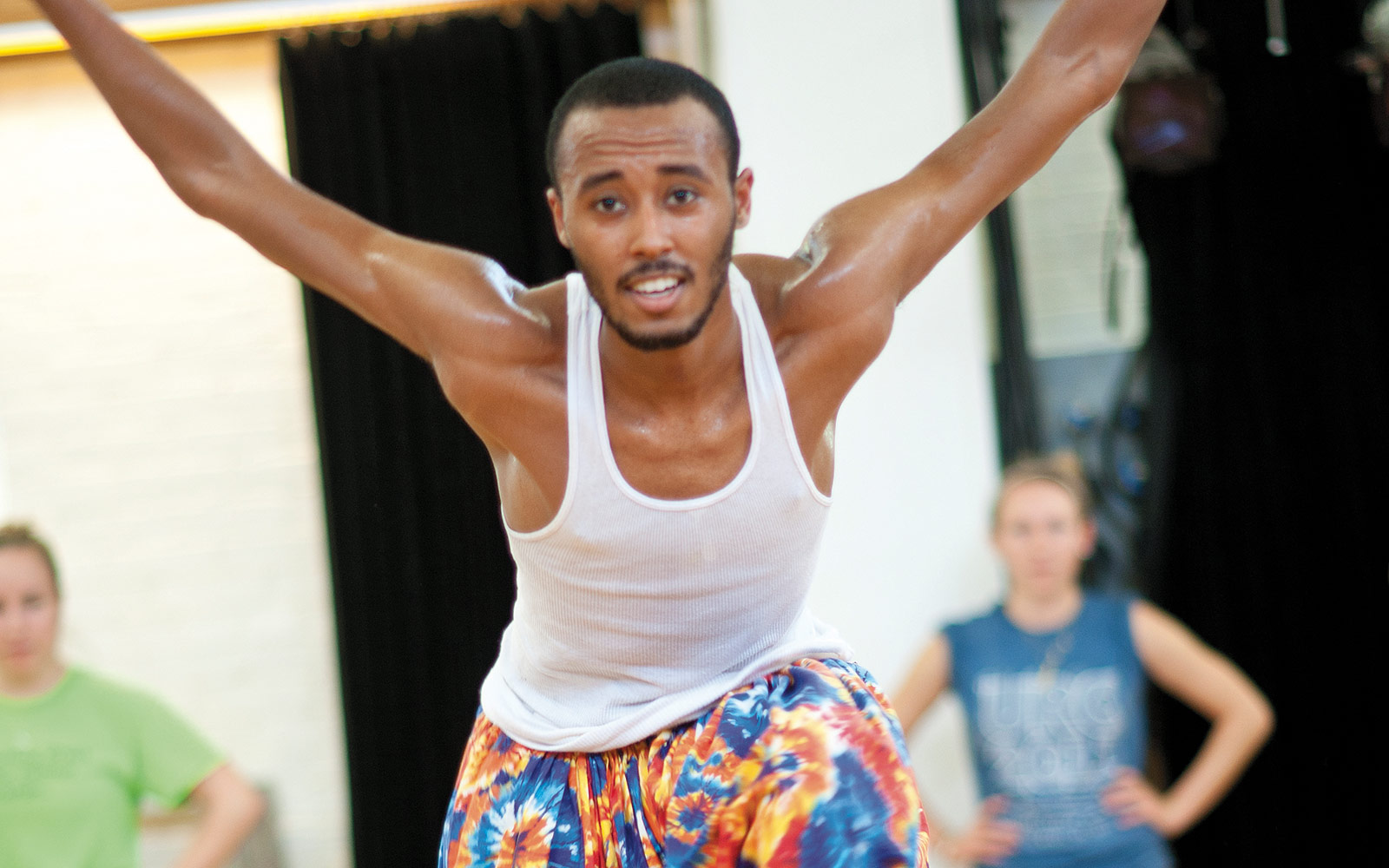 This photo was taken in an African Dance class, our first assigned shoot on campus. The dancers were so energetic. 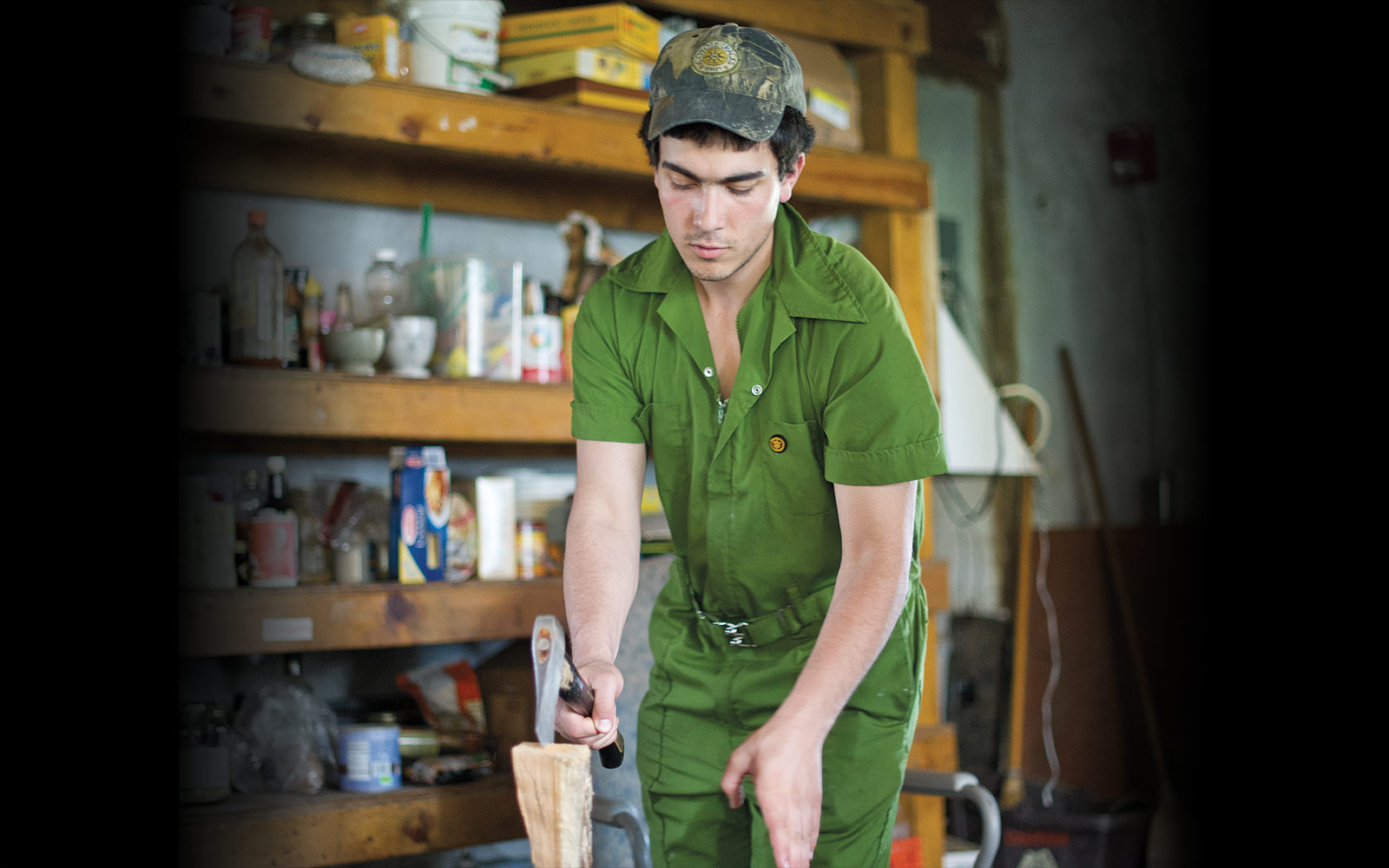 The Homestead students were really open and sweet. Boy, if they'd had something like that at Beloit when I was an undergrad, that's where I would have been living. 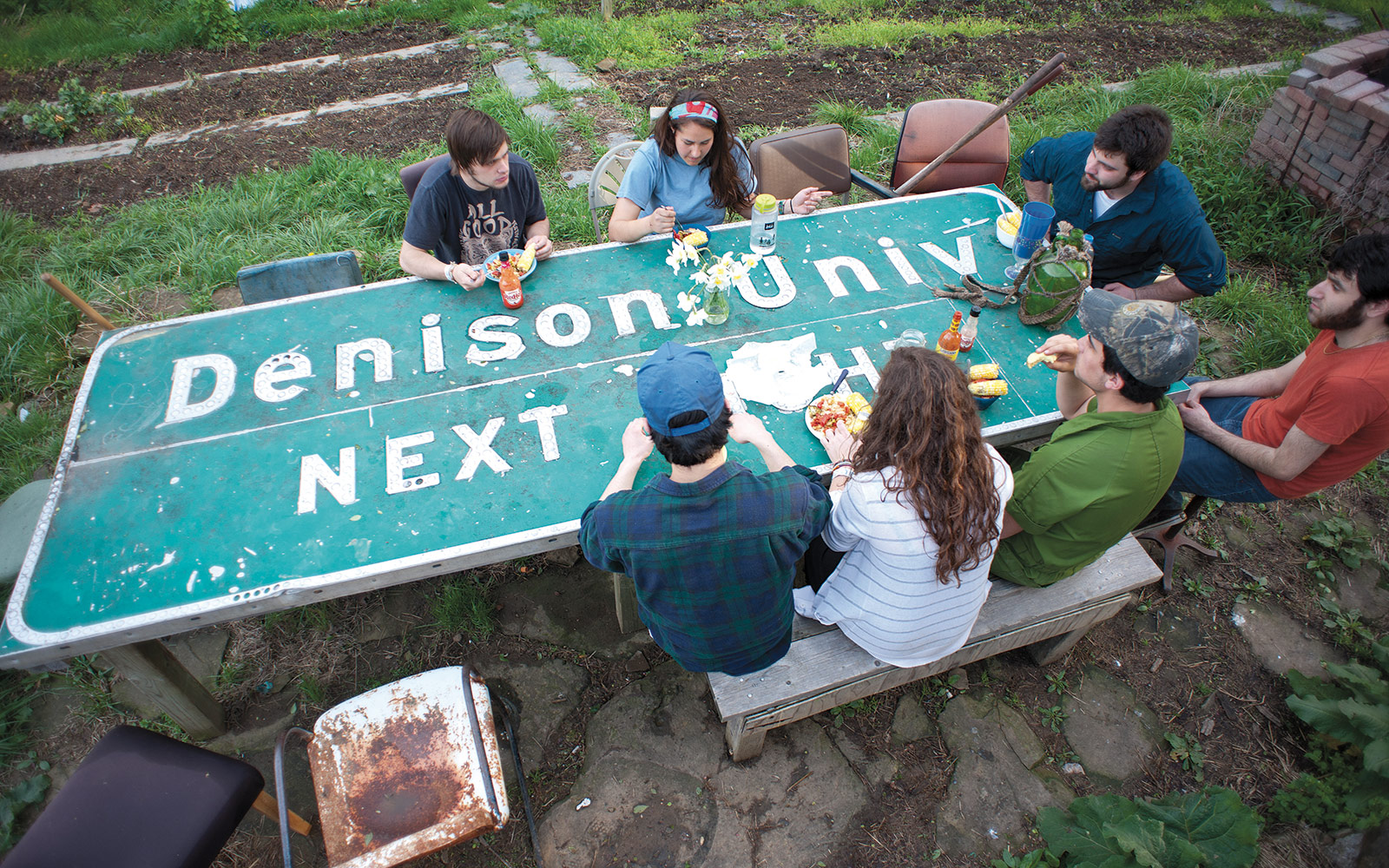 The sign has been there for years and years. The students have repurposed it as their dinner table. 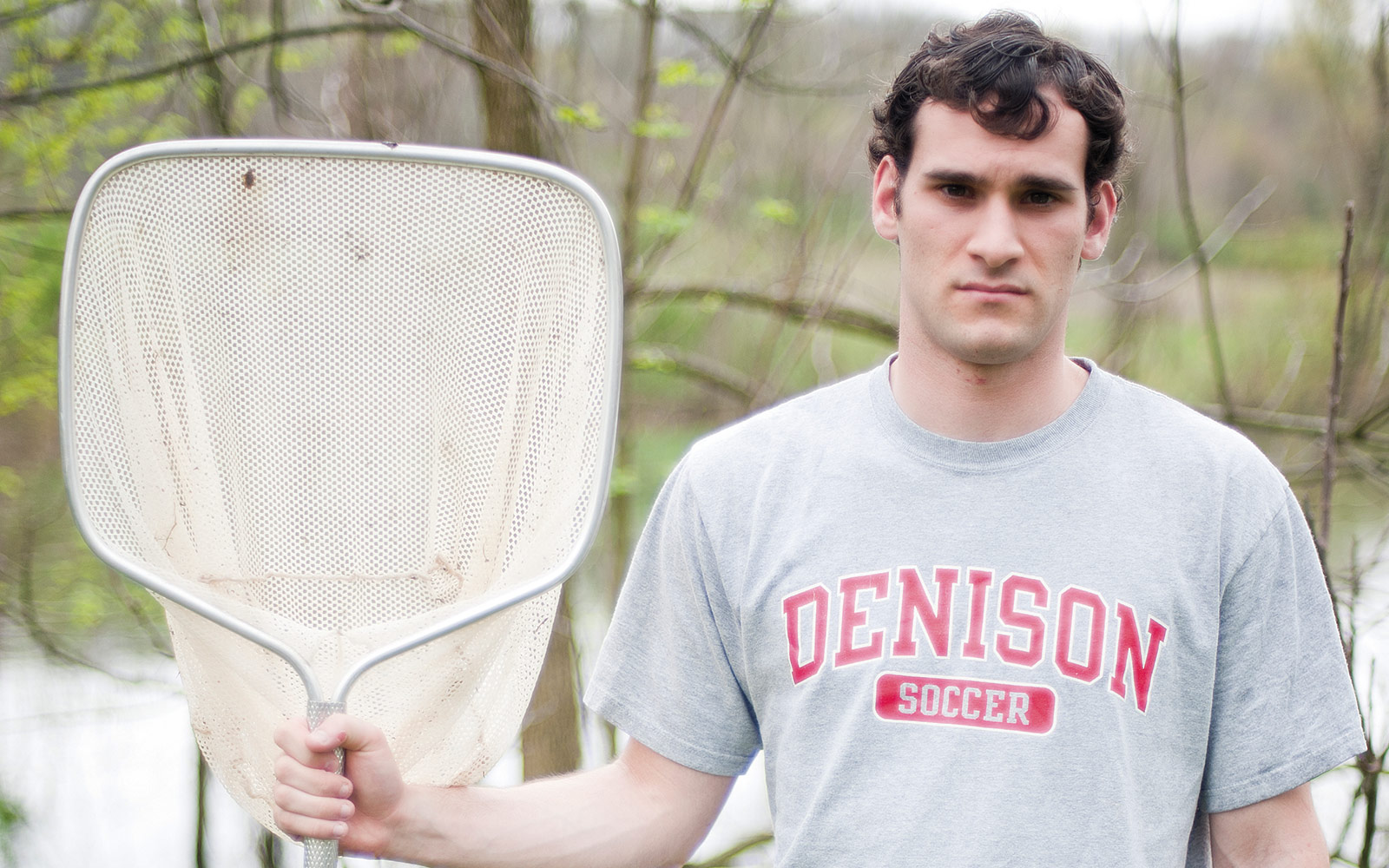 In this photo, I was going for that 'American Gothic' look. He really wanted to smile the whole time. I just liked the fishing net, the water behind him, the Denison soccer shirt. For me it kind of incorporates everything. 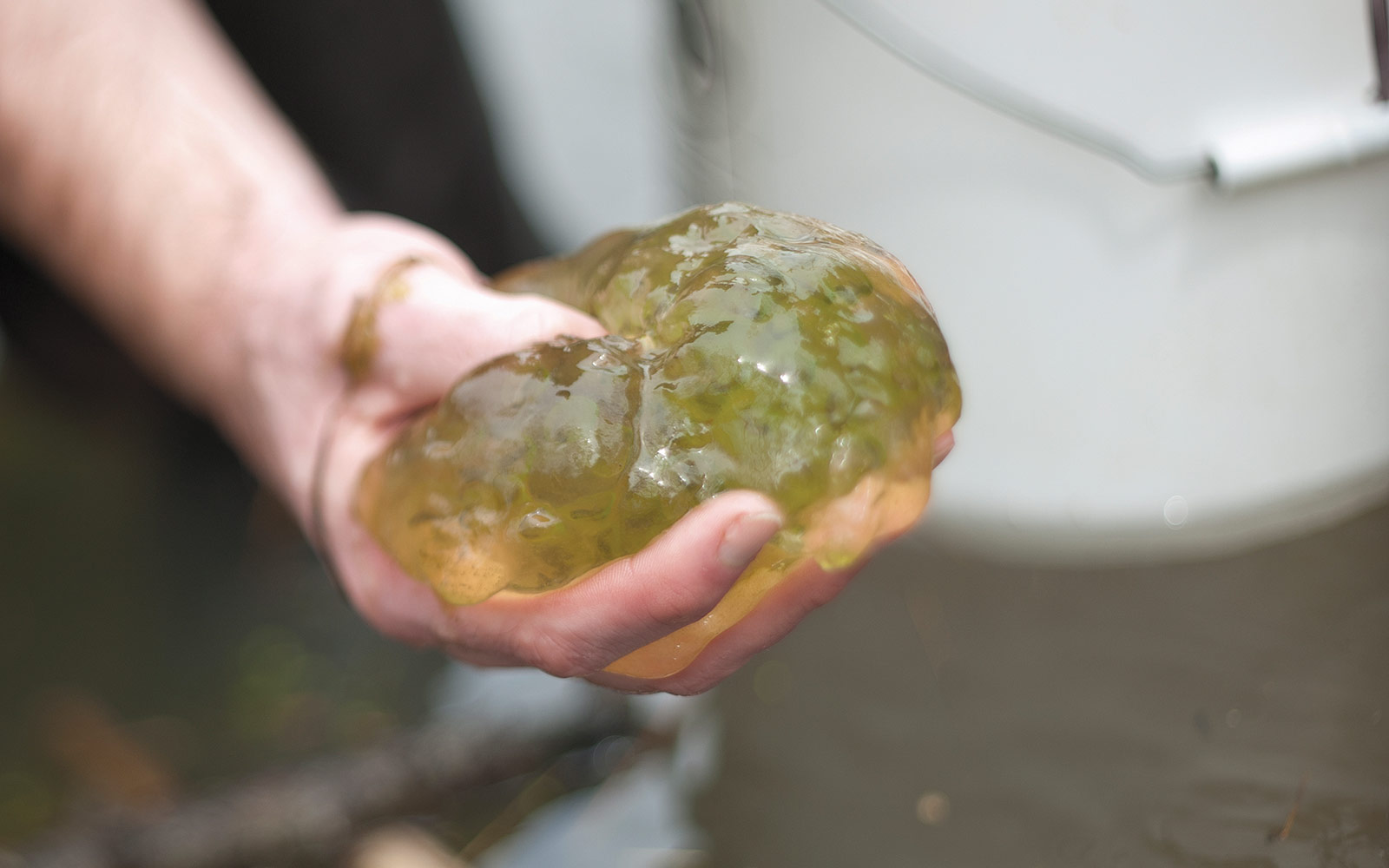 The student with the net and his professor were out in the BioReserve looking for some invasive species of fish that they had feared had gotten into the water. They were happy not to find it there. They did find some really cool tadpole lar… 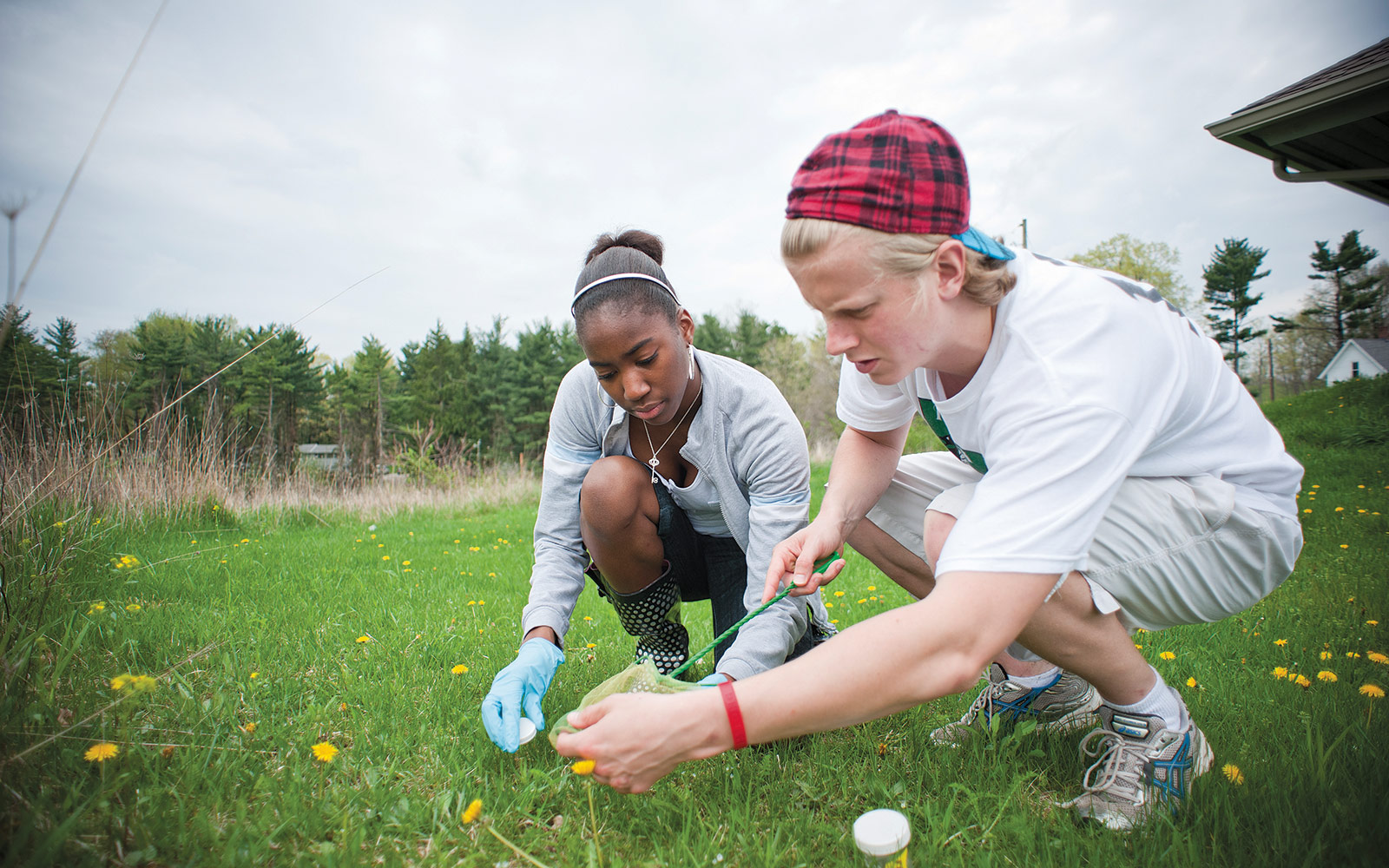 Here they were collecting and analyzing bees at the Anderson Field Station. They didn't seem nervous to trap bees, but there were a couple of instances where a few students backed up really quickly. 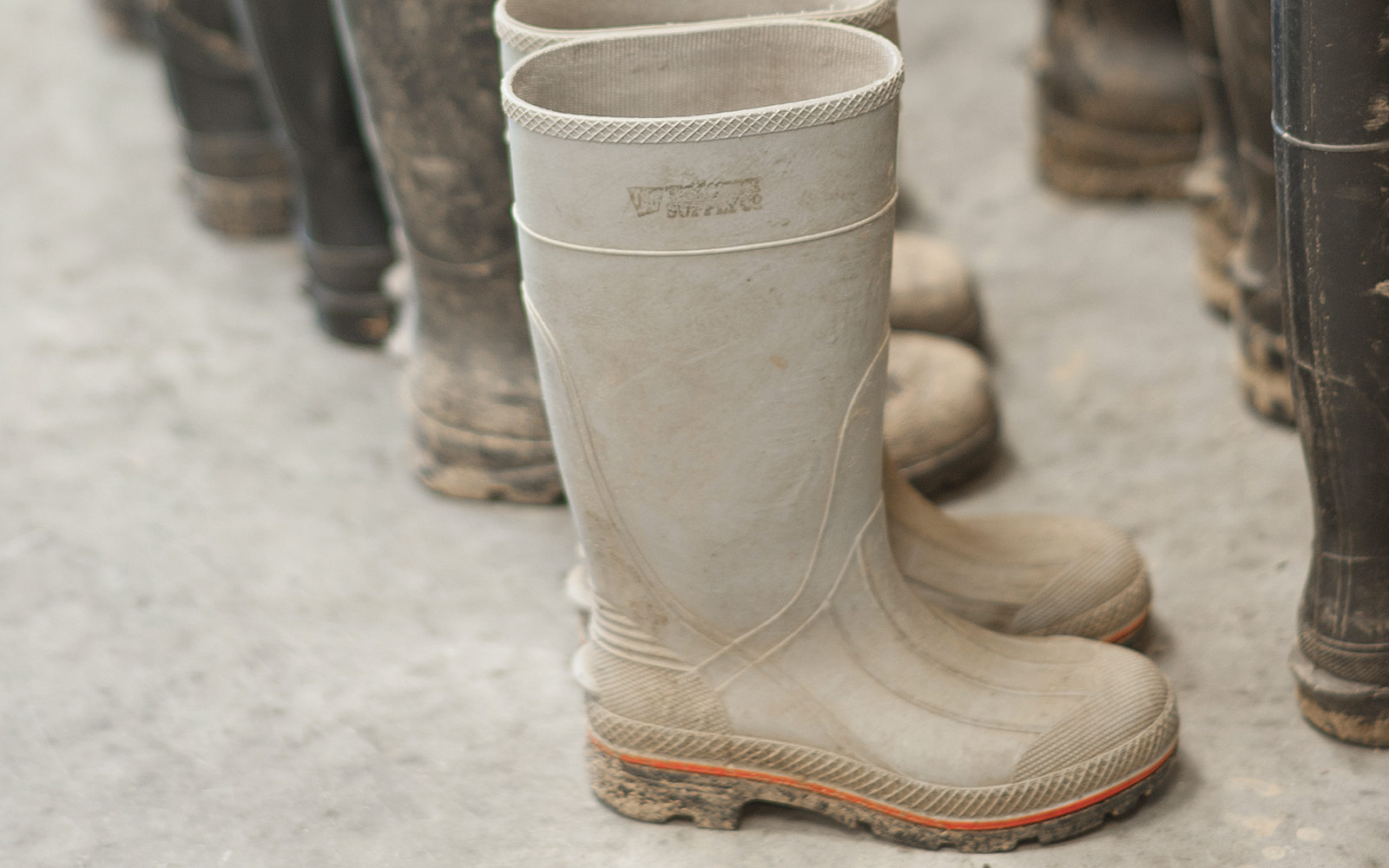 So many schools have a particular thing. For instance, you'll go to a school and everyone is wearing Ugg boots. At Denison, everyone was wearing these rubber boots. They were even wearing them when it wasn't raining.
Share this: