Start a dance party in Curtis

Gettin’ down in Curtis, where so many of us chow down, could make Denison the next YouTube sensation.

Play sand volleyball on the courts

Take your car down to the courts and blast some music on a sunny afternoon. If you prefer volleyball by moon- light, here’s a tip: There’s a switch on Lamson Lodge that controls the floodlights next to the courts.

Go for a walk in the Bioreserve

The Bioreserve has 350 acres of woods and fields where you can hike, bike, study, or just be. Just mind the experiment sites, please, since there’s always research going on.

Patrick added this to our list when we began making it in February. As you can see in the opening pages of this issue, his teammates have already checked it off. 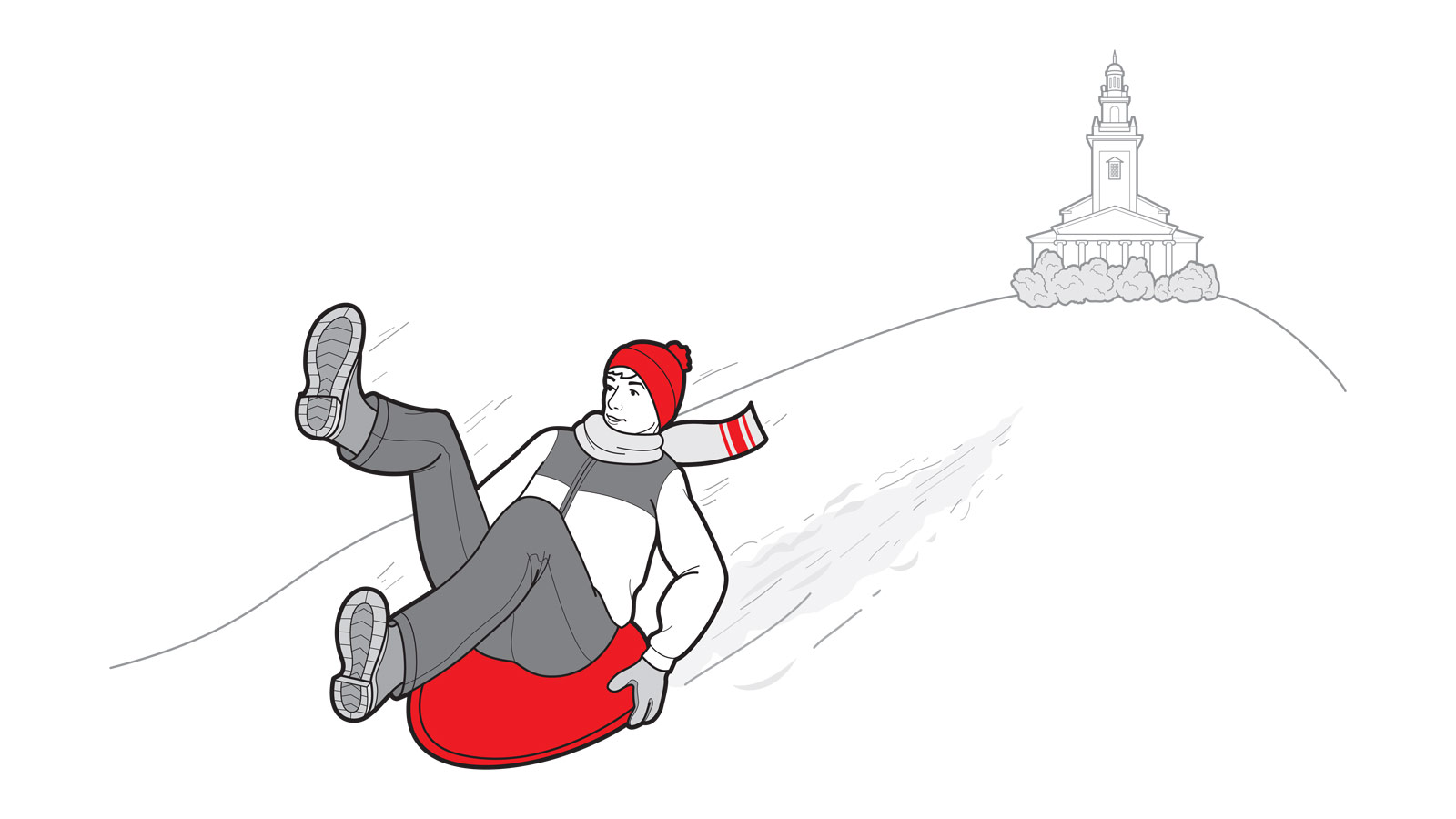 Sled down a campus hill

It’s safe to assume this wasn’t much of a bucket list item before the college officially banned sledding on campus due to concerns about liability.

You may get your chance. Once the Ebaugh renovations are complete and the chemistry faculty move out of their temporary offices in Chamberlin, the old Fiji house will be converted into a 56-bed, apartment-style hall for seniors.

Try every restaurant in Granville

With 25 choices throughout Granville, it takes a lot longer than it used to.

See a show in Olin Planetarium

The sky is putting on a couple of good shows in the coming months: There’s a meteor shower slated for May; a partial solar eclipse for folks living in eastern Asia, Alaska, northern Canada, and Greenland; and on April 3, Saturn was at opposition, meaning it sat directly across from–and was illuminated by–the sun. But you don’t have to be studying astronomy to geek out on celestial drama. Catching a live show is ideal, of course, but when the planetarium reenacts events like these, they can be great second-bests.

Two extra points if you hit a professor, four if he still gives you an A.

Actually, you might need a few visits. In addition to the number of touring and student/ faculty exhibits it curates each year, the museum holds collections that comprise nearly 8,000 objects from Asia, Africa, Europe, and North and Central America. There’s even a collection of Babylonian cuneiform tablets–inscribed clay tablets that seem to be receipts for goods like oxen and a slaughtered gazelle.

It’s one of the most attended sporting events of the year, and for good reason. Both teams crank it up a few notches when they meet, and the roaring crowds know it.

Despite their secluded location, the Homies are known for their hospitality. Stop by for a Saturday afternoon work party, learn something about socio-environmental sustainability, and it just might turn into a Homestead- style meal and night of music, stories, and laughs. 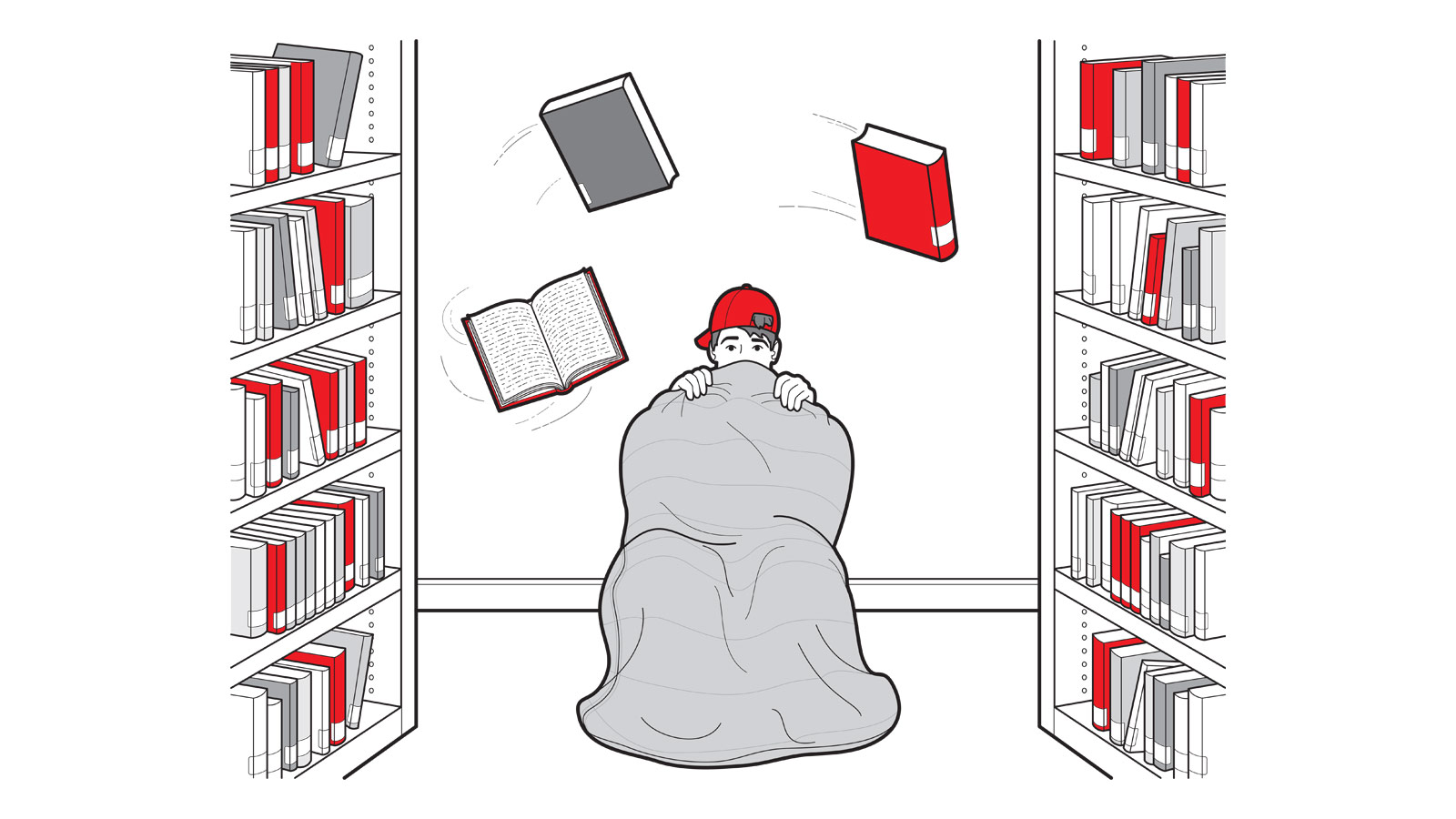 Spend a night in the Library

Good luck getting any sleep. Rumor has it that the ghost of a librarian likes to slam books down next to dozing bookworms.

It’s not about sexuality. It’s about gender, identity, how “normal” is defined, and what it means to truly understand a multicultural world.

It’s not exactly Mount Everest, but the summit holds plenty of history. Sugar Loaf Park (originally Stone Hill) was used as a stone quarry and many local homes’ foundations came from the hill. Later, it served as a communal grazing ground and a source of water for the sheep and cattle herds of the Granville farming community of the 1800s.

Explore the Indian Mounds around Newark

We know that they were built by Hopewell people some 2,000 years ago and that they’re the largest set of geometric earthen enclosures in the world (covering five square miles). And we can guess that they were constructed with pointed sticks, woven baskets, and human muscle. We don’t know exactly what the Great Circle represented, but we do know that the Octagon Mounds measure the passing of the moon over 18.6-year cycles. Whoever wants to learn more about the Great Circle can walk around the park it now occupies. But to visit the Octagon Mounds, you’ll need to be a member of the Moundbuilders Country Club, since its exclusive 18 holes now sprawl across the space.

Go to the top of Swasey

Doors are locked, but make friends with the bell ringers and you might succeed. Or better yet, become a bell ringer yourself.

Stomp on the seal … after graduation

We don’t know when the rumor started, but people say that stepping on the college seal in front of Swasey Chapel has the power to jinx graduation. Anyone dare to prove it wrong? 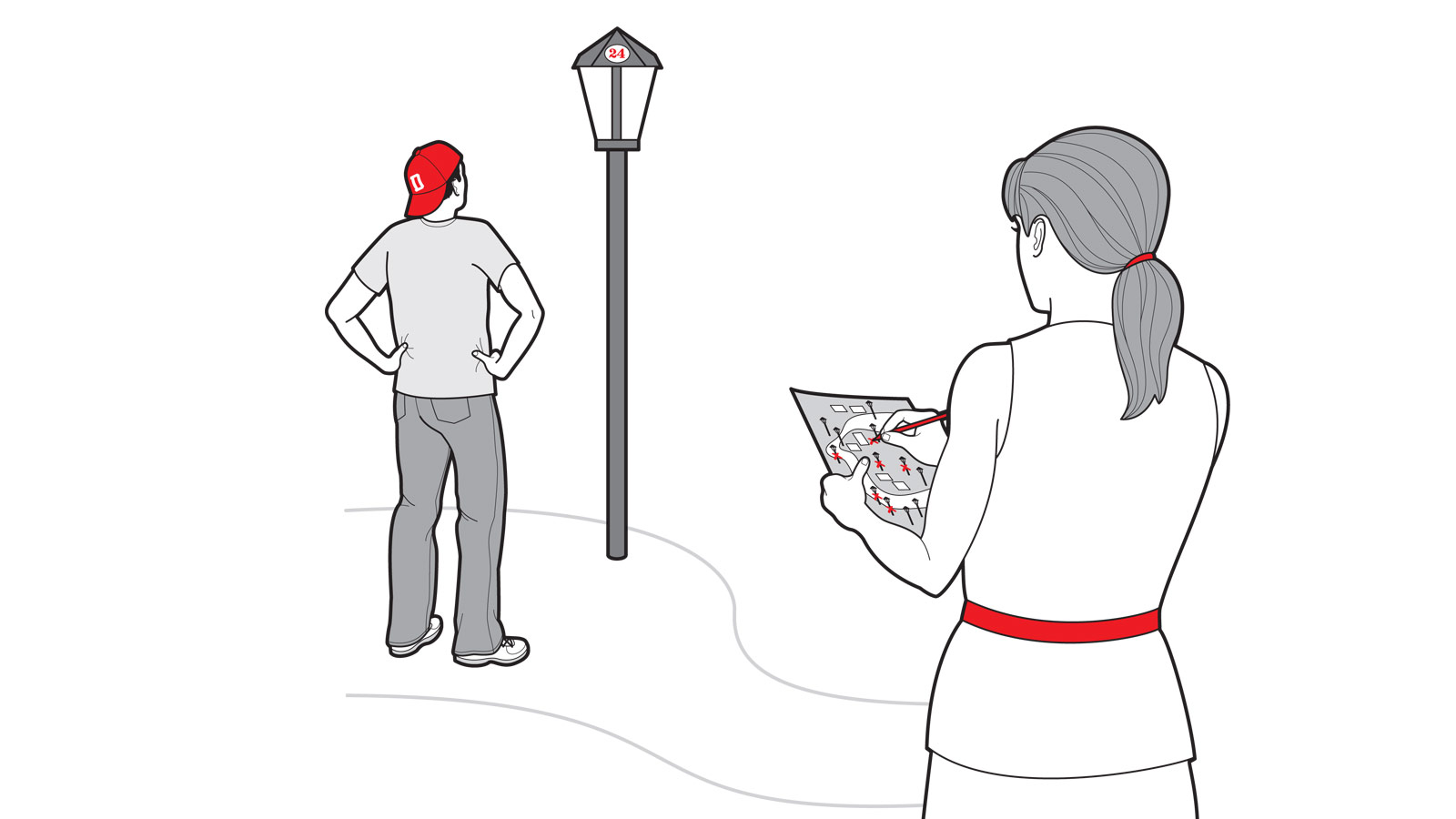 The story: The lampposts around Granville are randomly numbered and, apparently, number one is impossible to find. The truth: You’ll be looking for a long time. According to American Electric Power, there is no number one.

Since it was established in 1979, the Vail Series has brought Denison students, faculty, and staff the musical talents of Itzhak Perlman, Leontyne Price, Renée Fleming, Yo-Yo Ma, Béla Fleck, and many, many more. So that’s pretty cool. But cooler? The concerts are free.

Apply for Break Away, a service- learning trip over winter break

For those looking to get out of the house, but not quite ready to be back at school. Take a trip. Do some good.

Visit each building on campus and learn about its history

Here’s a head start: Bancroft House was part of the Underground Railroad; Whisler was a gift from the parents of Helen Arnett Whisler ‘20, who died of tuberculosis during her sophomore year; Cleveland Hall, home of the Studio Art Department, was originally the college’s athletic facility when it opened in 1904 (with a gym, swimming pool, locker rooms, and staff offices), and later the student union (featuring a diner and soda fountain).

Just the thing to do when you’ve got to get out in the dead of winter, but you just don’t have anything to wear.