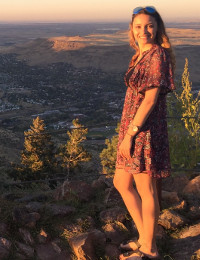 Title: Research Assistant II in the Center for Outcomes and Policy Research at Dana-Farber Cancer Institute

How I Felt as a First-Gen Student at Denison

As a first generation student, getting the chance to attend Denison University felt like a true privilege that was going to be short-lived due in part to my homesickness as well as my desire to not be drowning in debt. I felt extremely capable as a top student in my high school (as everyone at Denison usually is). The rigor of the courses would prove to be a challenge at times, but also a small piece of me doubted my ability to belong to a community where very few faces looked like mine, where I felt that my presence was appreciated but distastefully uncommon. That was freshman year and the first half of sophomore year.

By the end of sophomore year, I no longer wanted to transfer and had become a bit more comfortable with the idea that maybe I could do well here at several things. I found students who felt similarly to me by engaging in organizations like the TOMS Club, La Fuerza Latina, the Black Student Union and creating my own organization along with another student, Jasmine Passa, for improving community and cultural awareness on campus called Multicultural Dance Collaborative, MCDC. The next two years flew by and with the support of my Posse mentor, professors (in Political Science, Sociology and Anthropology as well as Communication), I felt I found my home on the hill and before I knew it, I was receiving my diploma.

Visiting home at times was difficult because I felt that some of my friends who were non-liberal arts students and my family didn’t understand the path as I was taking. As a first gen student there is a lot of pressure on me to bring success to the family particularly by entering into a critical field such as STEM (medicine in particular), law, etc.  I chose to drop my pre-med studies and my family had a difficult time with that. They also had a tough time when I tried to explain to them topics such as feminism and my interests in sociology and anthropology among other things. They felt I had let them down because I was no longer going straight to medical school and this created a lot of pressure and stress on which courses I chose, which activities I was in and how I spent my time, especially freshman and sophomore year.

The obstacles I faced at Denison as a first generation student included not knowing how to navigate the intricacies of higher education. For instance, while some of my peers had parents who had completed a liberal arts education and continued on to additional studies, I was never sure of what my next steps could be if I did not go into medicine or science. This motivated me to meet professors and faculty and learn what I could do and propelled me into growing into who I wanted to try and be, despite my lack of (but increasing) knowledge of the college system. Additionally, I would say my own self-confidence at times held me back from feeling like I truly belonged in certain parts of Denison.

My Launch into Post-Denison Life

The beginning, after graduating, was rough. I was job searching, which I suppose if my parents knew “such and such” would be amazing because a couple of emails and I’d be in somewhere. But, while my mother tried to talk to the nice tech-company people she encountered, they weren’t thinking of offering a job or their information to the nice lady at the coffee shop for her daughter. My parents weren’t sure how to help, but suggested places I could apply to and volunteer in my community. I began by volunteering with a Latin@ organization, temping and then thank God, four months later I had a job at my goal entry level position, where I interned during college and am still here today.

I am still in my Post-Denison launch I would say. I consider this the beginning of my sophomore year of the endearing term “adulting.” I have been in school so long, I am ready to go back and I appreciate any opportunity Denison or Posse offers to engage with fellow alumni and see what educational opportunities I could get into.

I would say, firstly, hang in there, don’t give up on yourself, seek those who see the desire for success you have, and push you to succeed (and it might feel uncomfortable and challenging) and lastly, go for it! Whatever it may be that your heart has told you to acquire, you deserve it. Whether it is your Bachelors, an application to a competitive scholarship, do your best and apply and finish. If it’s a BFA, your premed studies, dance, learning Arabic (some things I want myself ha-ha!) you and only you can stop yourself. Yes, your family might not understand all of your choices at first, but once you create a plan for your own success, you will be successful. Also, if you need to go to counseling, go. NO SHAME! And if you don’t like what they say, talk to your best friend, you will definitely find one at Denison.