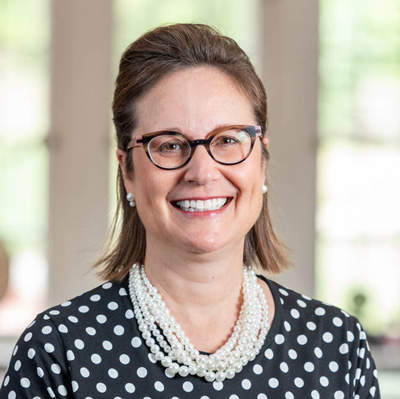 Suzanne Grassel Shoger has a great deal in common with students. She was recently one herself. Twenty-five years to the day that she received a bachelor’s degree in English and Communications Education from Miami University, she earned a master’s degree from Baldwin Wallace University in Leadership in Higher Education. Moving on to a doctoral program at The Ohio State University, Shoger earned her PhD in Educational Studies in 2018 at the age of 50. She was the oldest person in both programs, save two faculty members. “I have a real appreciation for today’s students,” says Shoger. “Now, more than ever, higher education requires putting oneself out there, stretching beyond one’s limits. There are seemingly unending opportunities to pursue, projects to take on, and programs to apply for. It’s exhausting and exhilarating at the same time.”

As Denison’s new Administrative Director of the Lisska Center for Scholarly Engagement, Dr. Shoger knows a little bit about, well, engaging scholars. Previously, she was part of the leadership team at The Ohio State University Honors & Scholars Center where she worked with undergraduate students applying for fellowships, as well as with Honors and Scholars students and faculty members across every discipline. As a Director in the Office of Student Academic Success at Ohio State, she advocated on behalf of all students for equity and inclusion in scholarly programs and processes. Identifying who is “in the room” - and who is not - and then making space for all to belong is one of Shoger’s top priorities in her new role at Denison.

In addition to counting herself a scholar, some of Shoger’s salient identities include wife, mother, daughter, educator, editor, book industry professional, and strategy consultant. Her work-from-home colleagues include Boston Terriers Puffin and Lindey.

Dr. Shoger joins Dr. Adam Davis, Director of the Lisska Center, and Dr. Diana Mafe, Associate Director of the Lisska Center in supporting scholarly engagement for all members of the Denison community. She can be reached at shogers@denison.edu. When students are back on campus, she can be found in Cookie Sunkle’s former office in Gilpatrick House where she promises to always have treats on hand for those who stop by.