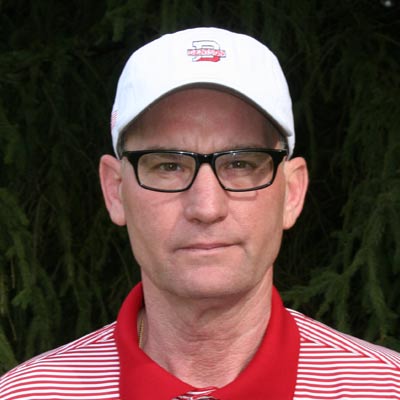 Rodney Butt has been the head men’s golf coach since 2010 and a part of the men’s golf program since 2003. Butt served as the assistant men’s golf coach at Denison from 2003 through 2010 and is also the Director of Golf at Granville Golf Course which is the home of the Denison men's golf team. In his first season as an assistant with the Big Red, Denison received their second consecutive NCAA Division III Championship Tournament invitation and the team went on to a 14th place national finish.

Prior to his seven seasons as the assistant coach at Denison, Butt spent 14 years as the head men’s golf coach at Granville High School where he led the Blue Aces to nine consecutive Mid-State League titles between 1991-99. During that span, Granville posted a 232-5 record. He coached Granville to a state runner-up finish in 1995 before breaking through with the school’s first state championship in any sport in 1996.  Butt is a nine-time MSL coach of the year, a three-time Central District coach of the year and was tabbed the Newark Advocate Coach of the Year for Golf, seven times. He has also been an active member of the PGA of America since 1985.