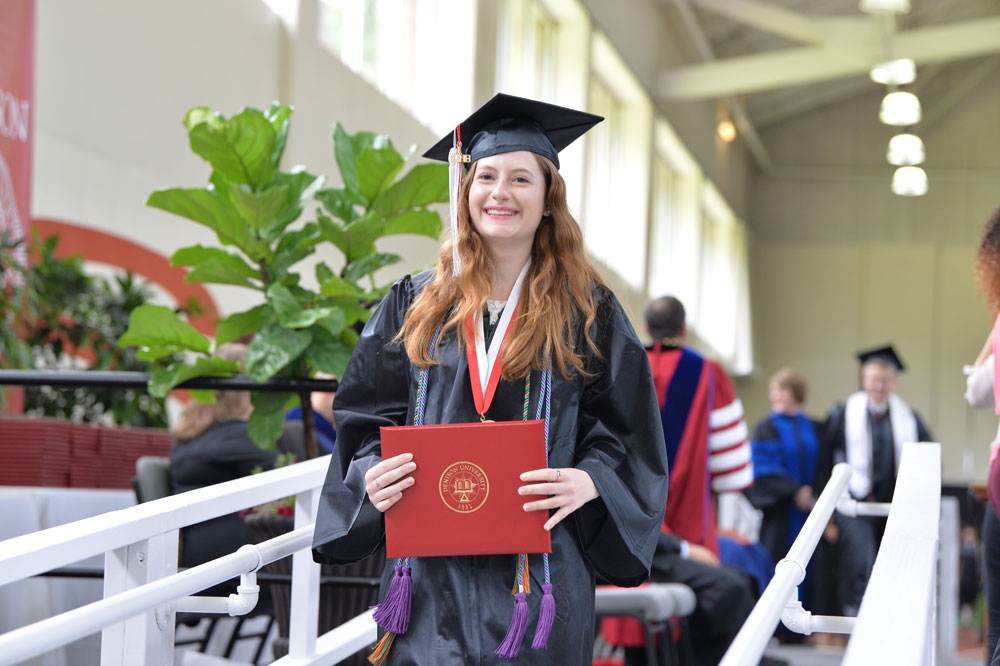 Recent graduate and decorated Denisonian, Kelsey Schwimmer ‘18, will continue to be an influential face on campus as this year’s Recent Student Trustee.

Every year, a distinguished member of the graduating class is selected to serve as Recent Student Trustee on the Denison Board of Trustees. Denison’s Board consists of thirty-seven members, including two trustee positions reserved for recent graduates who are asked to maintain a connection with and represent the current student body.

The selection process is quite competitive. Nominations are solicited from the entire Denison community and are then reviewed by a screening committee of students, faculty, and staff, who recommend top candidates to be interviewed by the Board. It is the full Board that makes the final decision. Denison Trustee Lee Sachs ‘85 chairs the Board Committee that oversees the process. According to Sachs, “The process of selecting the Recent Student Trustee is incredibly rigorous and gets harder each year as the number of extremely well qualified students continues to expand.”

Vice President for Student Development Laurel Kennedy explains the role further saying, “The Recent Student Trustee sits on several regular committees of the Board and also participates in Alumni Council. Trustees meet in person three times each year, and often committees will meet in between, for updates or decision-making by phone conference.” As a member of the Board, Schwimmer will have the opportunity to vote on major decisions affecting the College, such as the budget, policy shifts and initiatives, tenure decisions, and awarding of degrees, to name just a few. Kennedy believes that Schwimmer will “contribute the most on the Student Development Committee of the Board, which is currently working on plans for improvements to residential halls and a new wellness center, as well as other issues related to student well-being.”

Schwimmer has high hopes for her time serving as Student Trustee. Schwimmer says that she is “hoping to further bring current student voices and perspectives into the conversations and decisions made by the Board. I want to highlight what’s important to students, and use my own experiences at Denison to focus on areas such as wellness, leadership, and sexual respect.”

Schwimmer says that she is, “so excited to continue working with the university to create positive change, as well as more expansive opportunities for current and future students just like the ones I was able to take advantage of that played an integral role in my own growth as a leader and as a person… I’m thrilled to be a part of Denison’s continued growth, and to bring students’ opinions and priorities to the table.”

Schwimmer made an impression on the Denison community through her leadership and engagement. She founded and served as president of the Denison Advocates for Sexual Health (DASH), was a three-year Leadership Fellow, an Admission Hosting Coordinator, and Senior Interviewer. She was also president of the Educational Honor Society, Kappa Delta Pi, a research assistant for the psychology department, an Aug-O team leader, and a peer mentor. The breadth and depth of her commitments will serve her well as Recent Student Trustee.

According to Kennedy, “Kelsey was selected because she will bring lots of outstanding qualities and experiences to her service as a Trustee. As a Leadership Fellow, she has a huge network of connections to current students. Having started Denison Advocates for Sexual Health, she demonstrated initiative and a commitment to improving campus life… she gave good examples of times when she found her voice even with others who had greater experience or authority, so we felt confident that she could do the same on the Board.”

Schwimmer joins Brian Allen ‘17 as Recent Student Trustee, replacing Conrad Wuorinen ‘16, who completes his term this summer. Sachs shares, “The Recent Student Trustees play such an important role on the Board. Not only do they represent the student view on the important issues facing the Board, but they bring the critical thinking, leadership and creative problem solving they refined and honed during their four years at Denison. Kelsey will be a great addition to the Board and represents the best of what a Denison education has to offer. We look forward to having her on board.”

In addition to serving as Denison Recent Student Trustee, Schwimmer will begin the Urban Teaching Apprenticeship at the University of Pennsylvania Graduate School of Education, a one-year masters and teaching certification program in elementary education.