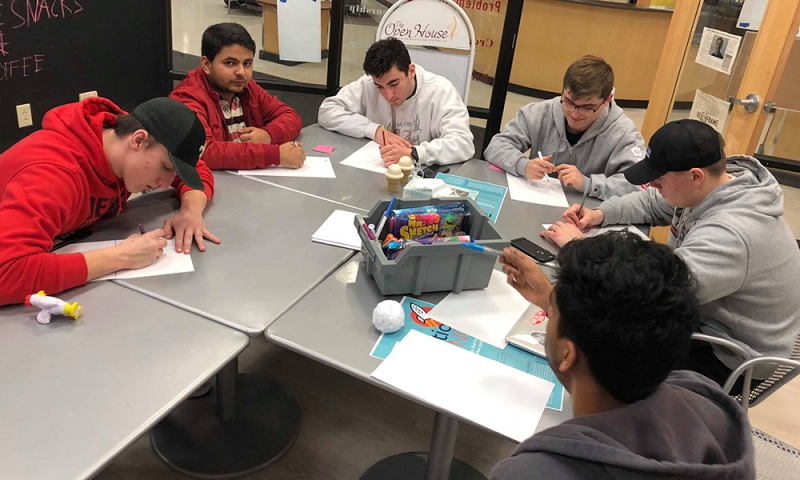 The transition from high school to college can be a difficult one. For many first-year students, attending college is the first time that they have lived away from home. In addition to First-Year Programs, roommates, housing, and community advisors (CAs) play a major role in helping students in this transition.

CAs host a number of programs on their floors each semester says Ben Daleiden, Denison's assistant director of residential communities. After the residential community's staff had a monthly meeting with Steve Krak and the Red Frame Lab team, Jorge De La Torre '19, the CA of the second floor Shorney Hall, had an idea. He wanted to bring students from his floor to the Red Frame Lab design a t-shirt.

“The hope was to further unify the community through the purchase of some t-shirts, but also create community buy-in by having the residents design the t-shirt themselves,” said Daledian.

De La Torre wanted something to remind his residents of the strong connections they formed during August Orientation- and have continued to build since then.

“All those great and awkward freshman memories tend to wash away with the year. My hope was to offer them something that would remind them of their days on the Second Floor of Shorney,” said De La Torre. “I wanted them to show their pride in being part of such an engaging and fun community and to inspire other communities across campus.”

“Thanks to Steve from the Red Frame Lab, we followed a cool design-thinking framework in terms of coming up with ideas for our floor t-shirt,” said De La Torre.

The residents came up with three possible designs. “They were challenging each other's ideas and mixing parts of their ideas to come up with a design that represented our community to the fullest.”