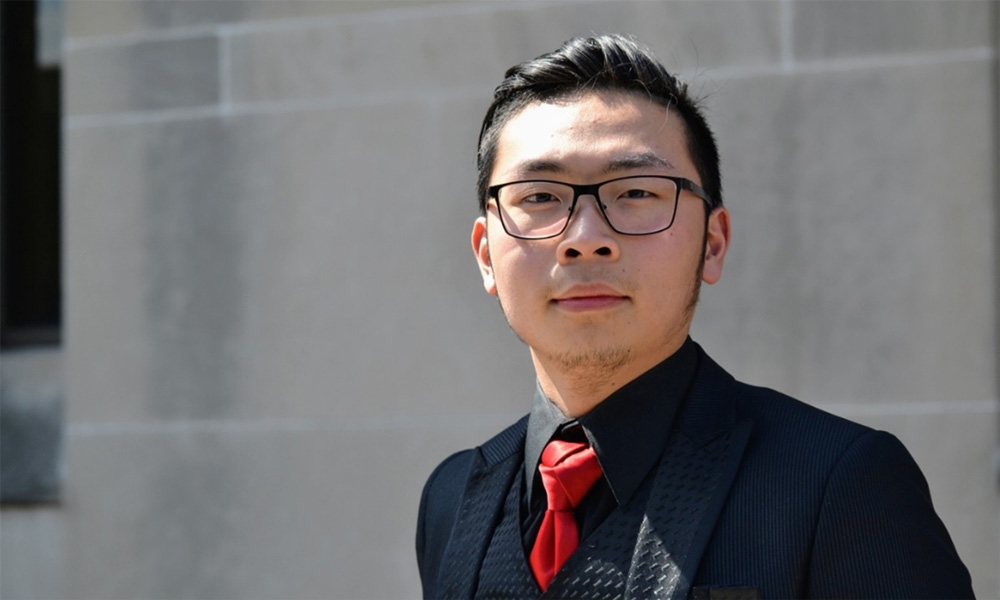 When Alan Phung ’22 was a boy, one of his favorite memories was spending time with his father and drinking coffee together. “Our family didn’t have a lot of money when I was young so my dad worked a lot. We only had a couple of hours together a week — and we drank coffee together. It was a special time for us.”

The idea came to Phung after he graduated high school. His father had developed terminal cancer and when he died during Phung’s senior year, and the significance of their coffee ritual became even more profound.

“Vietnamese coffee reminds me of my dad,” says Phung. “It’s a great product and I want people to have the same feeling that I do.”

It turns out that developing a coffee beverage for sale is not easy. Phung began by importing lots of coffee beans from all over the world, testing them himself. Eventually, he discovered that the best beans really were from his father’s homeland, Vietnam.

“What makes coffee beans good is if they’re grown at a higher elevation — higher elevation means lower acidity. And in a warm climate is important too,” he says. “Vietnam turns out to have that perfect combination. Hot and high.”

Before Phung even went to college, he turned to Future Founders, an entrepreneurial community for youth in Chicago. They taught him the first steps of turning his hobby into a business. And once he came to Denison, Phung crossed the threshold of the Red Frame Lab (the college’s design, innovation, and entrepreneurial space) — and knew he had found the help he needed to build on his success.

Through the Red Frame Lab and Future Founders’ continued support, Phung learned about food licenses, he met other food entrepreneurs and gained a better understanding of the complicated set of laws around foodservice and distribution. He also met David Howitt ‘90, former owner of Oregon Chai and CEO and founder of the Meriwether Group, a startup accelerator, and capital partner.

“David gave me great marketing advice about guerilla marketing and how to be bootstrapper - like bring a backpack with coffee to conferences and give out free samples.”

After he attained all his licenses through the national restaurant association, Phung used his sophomore year summer to start selling at food festivals back in Chicago — working 16-hour days, and selling out each day.

“I spent three days a week in a shared food kitchen making my coffee, and four days a week selling. I was able to do some great customer discovery, talking to my customers and gathering qualitative data,” he says. “I also tested my coffee during the school year with my friends, but it’s different when people pay.”

Phung earned a lot from the street markets, then he won a participated in a pitch competition in Chicago with a cash prize as well.

Back at campus, Phung competed in pitch competitions as he took his classes. In the spring of 2020, he went to San Francisco to pitch in a competition, the EO GSEA (Entrepreneurs’ Organization Global Student Entrepreneurs).

Once again, Phung won the day and represented San Francisco in the national competition. He competed against 40+ other entrepreneurs who all came from different cities around the US. Once there, Phung made it all the way to the semi-finals and participated in the StartUp Grind conference where more than 10,000 entrepreneurs gathered from around the world.

And even as he’s completing his coursework, and competing, Phung is continuing to learn and develop his product. He’s refining his roasting technique, learning how to extend the shelf life of his coffee, learning about nutrition labeling and trying to get the most out of his coffee bean import routes.

Stay tuned for Mai Coffee at a retailer near you.