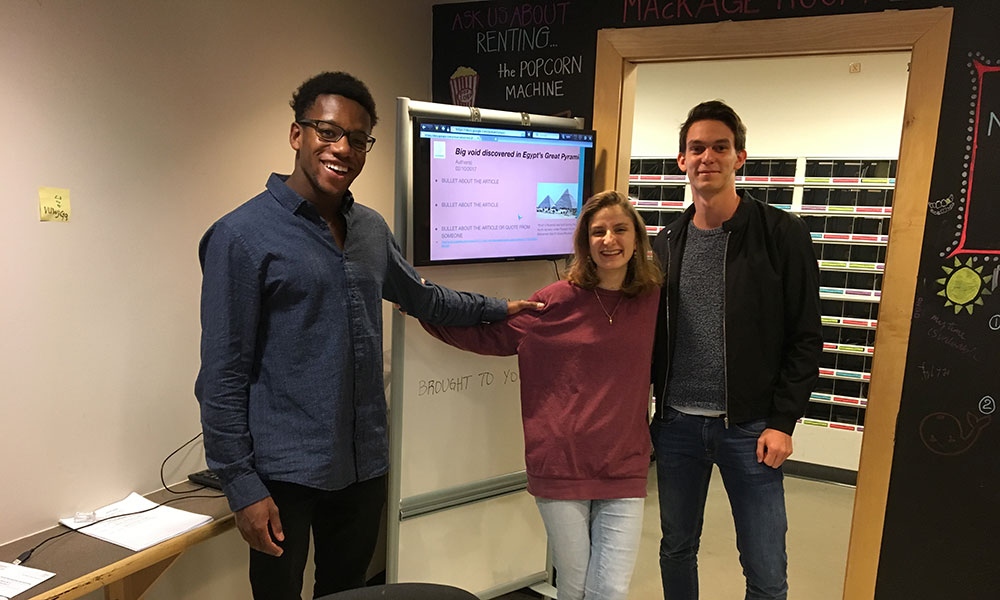 Students use the Red Frame Lab to solve problems

A new addition to campus, circa 2017, the Denison Red Frame Lab is already a major success in helping students reach their full potential. The Red Frame Lab aims to assist students in solving campus problems in rather unique ways.

The Red Frame Lab uses a rather unique approach to help students solve problems. Adopted from the Stanford Design Thinking approach, the Denison Design Process encourages students to approach problem-solving using the following steps: Listen, Reframe, Imagine, Prototype/Iterate, and Inspire. The Slayter News Team “reframed” their challenge in light of an analysis of their target students. They asked: “How might we get fresh national and international headlines in front of a large volume of students given just a few minutes of their time?”

Krak explains that at the Red Frame Lab, “We’ll help you [the student] try these processes, we’ll guide you as you get used to them, and we’ll give you the experience you need to go off on your own and use them. It’s also about being a safe place to try, fail, and try again. We embrace ‘failures’ here because every ‘failure’ teaches us something, and we’re more resilient for it.”

The prototype involved a television that was originally hanging on brackets over a portable whiteboard, with content from a Google Sheet slideshow. After several iterations and positive feedback, the television is now mounted on the wall of the Slayter Mailroom desk and scrolls headlines, graphics and QR codes for more information. All of this is curated remotely by Kelly and his team.

According to Kelly, “The prototype was made to expose students to the world around them. We acknowledge that at Denison it is easy to become isolated from the world off the hill, so our goal in making the prototype was to bring the outside world to Denison — even if only for five minutes a day.”

Krak explains that most students have not been exposed to disciplined design processes. The Red Frame Lab exposes students to such processes and helps them learn how to use them effectively. He says that “students and groups are encouraged to step up and take on some of these challenges on behalf of the campus,” and hopes that “every student leaves Red Frame Lab design sessions at least valuing user-centric design, a multitude of possible solutions to a problem, and prototyping early.”

Krak reports that in its inaugural year, Red Frame reached a large number of students, with about one out of every five students using the Red Frame Lab for something last year. Denison’s intent is that more students will utilize design processes effectively as autonomous thinkers, discerning moral agents and active citizens.

When asked what’s on the horizon for Red Frame, Krak says that he aspires for large numbers of students using and becoming proficient with the Red Frame design process and and “when they are faced with their next design challenge, they’ll know how to ‘Red Frame it.’”