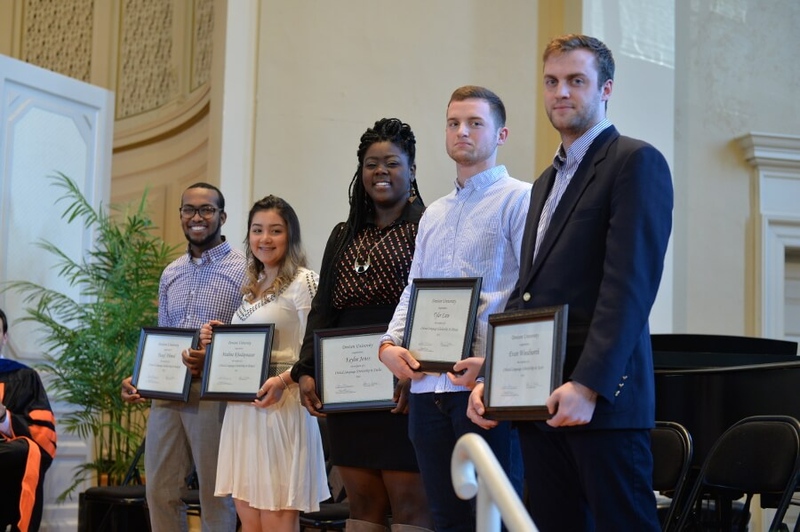 Denison University President Adam Weinberg recognized members of the college’s student body who have been awarded prestigious national and international academic awards and scholarships at the Academic Award convocation, held in Swasey Chapel on Friday, April 15, 2016.

The Fulbright Program is the flagship international educational exchange program sponsored by the U.S. government and is designed to increase mutual understanding between the people of the United States and the people of other countries. Denison students who were awarded Fulbright Scholarships include Evan Woodnorth, from Whitefish Bay, Wisc., who will serve as a Fulbright English Teaching Assistant in Turkey, and Christopher Perry, from Tiffin, Ohio, who will serve as a Fulbright English Teaching Assistant in Germany. In addition, three Denison students were named as alternates for the Fulbright scholarships, they include Benjamin Hsiung, from Huntingdon, Pa., for a study grant to the United Kingdom; Patrick Keller, from Lexington, Ky., to teach English in Colombia; and Christopher Schroeder, from Worthington, Ohio, to teach English in Korea.

Critical Language Scholarships are fully funded summer overseas language and cultural immersion programs for American undergraduate and graduate students, with the goal of broadening the base of Americans studying and mastering critical languages and building relationships between the people of the United States and other countries. Denison students who were awarded Critical Language Scholarships include Yusef Ahmed, from Columbus, Ohio, and Madina Khudaynazar, from Malden, Mass, who will study Turkish; Keylee Jones, from Hixson, Tenn., who will study Arabic; Tyler Law, from Wilmington, Ohio, who will study Chinese; and Evan Woodnorth, who will study Azeri before taking his Fulbright position in Turkey.

RISE (Research Internship in Science and Engineering) internship grants from the DAAD German Academic Exchange are a summer internship program located in Germany for undergraduate students from the United States, Canada and the UK in the fields of biology, chemistry, physics, earth sciences and engineering. Denison students who were awarded RISE internships include Amanda Jack, from Goshen Ky.; Nathan Myers, from Anchorage; and Max Meirow, from Concord, N.C.

National Science Foundation Graduate Research fellowships help ensure the vitality and diversity of the scientific and engineering workforce of the United States. The program recognizes and supports outstanding graduate students who are pursuing research-based master's and doctoral degrees in science, technology, engineering and mathematics (STEM) and in STEM education. Denison students who were awarded these research fellowships include Taylor Kessler Faulkner, from Chapel Hill, N.C, who will obtain a PhD in computer science, focusing on a combination of artificial intelligence and robotics at the University of Texas, Austin; and Sarah Winnicki ,from Medina, Ohio, who will attend graduate school at Kansas State University to pursue a master’s degree in biology.

Davis Projects for Peace awards are $10,000 grants to encourage and support today’s motivated youth to create and try out their own ideas for building peace. Denison students Junyi Cui, from Shenzhen, China, and Ran Ji, from Chengdu, China, will travel to China in the summer of 2016 to fulfill their project, titled “Bridging the Gap: Empowerment Camp for Migrant Children.”

Benjamin Gilman Scholarships aim to diversify the kinds of students who study and intern abroad and the countries and regions. Denison students who were awarded Gilman scholarships to support their study abroad include Sirena Davis, from Boston, who is currently in Uganda; Helen Vaquero, from Los Angeles, who is studying in Spain; and Estrella Vargas, from Chicago, who is studying in Thailand.

Denison University is a leading national college of liberal arts and sciences where students from around the world come to pursue academic inquiry and research, to analyze and solve problems, and to forge the skills needed to succeed. On a beautiful, fully residential campus, located minutes from Forbes-rated #1 Opportunity City, Columbus, Ohio, students build enduring relationships and pathways to the professions, supported by faculty mentorship in classrooms, laboratories and studios; through a wealth of career-launch programs and internships; and in partnership with a thriving, far-reaching alumni network. Denison’s place at the forefront of higher education is recognized by “Colleges That Change Lives,” U.S. News, and Forbes, among others.