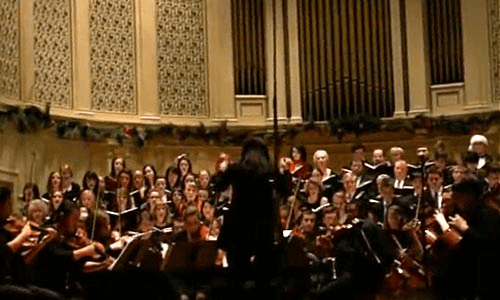 The Denison University Concert Choir, under the direction of Associate Professor of Music Wei Cheng, has been selected as a semi-finalist for the American Prize under two categories .

In addition, Cheng has received an invitation to be a guest conductor at Carnegie Hall in spring of 2018.

The Denison Concert Choir is a community choir, comprised of Denison students, faculty and staff, as well as members of the local community.

The American Prize is a series of new, non-profit national competitions in the performing arts providing cash awards, professional adjudication and regional, national and international recognition for the best recorded performances by ensembles and individuals each year in the United States at the professional, college/university, church, community and secondary school levels.

Administered by Hat City Music Theater, Inc., a nonprofit organization based in Danbury, Connecticut, The American Prize was founded in 2009 and is awarded annually. The competitions of The American Prize are open to all U.S. citizens, whether living in this country or abroad, and to others currently living, working and/or studying in the United States of America, its protectorates and territories.