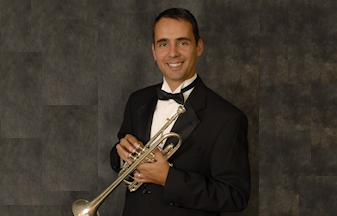 Music faculty Mark Wade is known as an excellent trumpet player and teacher - his talents keep him in professional demand.

But Wade has a musical alter-ego. He performs and records on piano, classical/acoustic guitar, bass guitar, penny whistle (think Irish music on a flute held facing out), as well as hammered and mountain dulcimers.

According to an article in the Newark Advocate:

He’s released six CDs and has published three dulcimer books — all the while globetrotting around the world, regularly performing throughout the United States, Asia and Europe.

“I just call myself a musician,” he said, “because living, breathing musicians can’t really pigeonhole yourself like maybe you could a couple generations ago.”