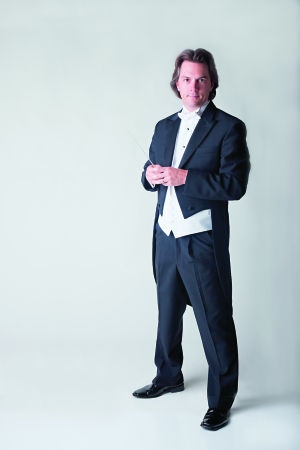 Daniel Meyer, a member of the Denison class of 1994, will guest conduct the Rochester Philharmonic Orchestra for its “Summer Spectacular” concert on Friday, July 11, 2014.

Meyer, a native of Cleveland, has been conductor and musical director of several prominent American orchestra. He is credited with revitalizing the Asheville Symphony and Erie Philharmonic orchestras, of which he serves as musical director. From 2003 to 2009 he was resident conductor of the Pittsburgh Symphony Orchestra and music director of the Pittsburgh Youth Symphony, which he led on its first tour of China.

He has been a guest conductor for the Eugene Sympony and made his European debut with the Staatsorchester Stuttgart during the 2010-2011 season. Meyer has conducted the Utah, Forth Worth, San Antonio, Syracuse, Tallahassee, Lexington, Portland, Santa Barbara, and Wheeling symphonies. In summer festival appearances he has led the Cleveland Orchestra at Blossom, and the Chautauqua, and Brevard festival orchestras. Meyer was awarded the 2002 Aspen Conducting Prize and subsequently served as Assistant Conductor to David Zinman at the Aspen Music Festival.

Meyer is a graduate of Denison University and the University of Cincinnati College-Conservatory of Music and received the Orchestral Conducting Honors Award as a doctoral student at Boston University. He also studied conducting at the Hochschule für Musik in Vienna as a Rotary Ambassadorial Scholar.