Interview with the Eroica Trio 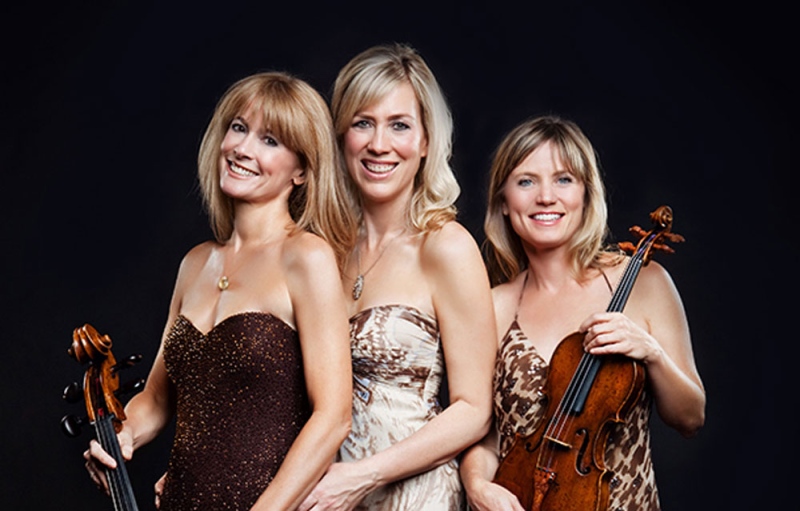 The Eroica Trio, Erika Nickrenz on the piano, Sara Parkins on the violin and Sara Sant’Ambrogio on the cello, graced Denison’s Swasey Chapel with their presence and hauntingly beautiful music.

The Trio did not look like they had just been in concert for two hours, as they walked into the reception with more energy than all the 20-year-olds put together. I had the opportunity to catch up with the two Sara’s after the concert, at the reception in Knobel Hall. One would think they’d be intimidating to talk to but they spent the evening, binging on the appetizers (bacon sticks anyone?), kicking off their shoes and mingling with us commoners, talking music and life.

Sara (Sant’Ambrogio) and I talked about her musical journey and the beginnings of the Eroica Trio, sparing no detail when I asked. She comes from a tradition of music. Her grandmother and father ran a prestigious music camp called Red Fox Music Camp, which she was promptly thrown out of when she was 13. “You weren’t being a good role model?”, I asked, playfully. “You know how it is, it’s hard when your father is running the camp, I just wanted to have fun!”

So, on she went to another music camp where she met Sara Parkins.

The two Sara’s looked at each other and laughed, “We met in music camp when we were 14 and we’ve been best friends ever since! We were both talking about future plans and Sara (Parkins) wanted to go to Julliard but I wanted to go to the Curtis Institute of Music.”

The conservatory is in Philadelphia and has a very selective acceptance rate. Her parents wanted her to finish high school but Sara was determined. “My parents wouldn’t let me audition unless I made it out and paid for my own flight ticket, so I did. I played on the street and made the money, made the last audition and got it. It all sounds so surreal now.”

Sara is upbeat, smiling and telling me the story nonchalantly, like it was the most straightforward thing in the world. The hours of practice, dedication and skill it takes to be a musician seemed obvious and natural to her. “You mean they want me to practice 5 hours a day and I can go?” she said, “I can do that.”

Parkins didn’t mention this to me herself, but she comes from a long line of legendary musicians, taking the stage when she was only 13, Sant’Ambrogio said to me about her friend.

Sara, five something feet tall, like me, has the warmest face and a quiet voice. If you saw her on the street, you wouldn’t see someone with the air of a world-class musician. She grew up in a segregated school where she was the minority, it gave her a different perspective, she said. A young talent, she found herself in Julliard at the same time as Erica Nickrenz. They became friends and the trio played musical chairs with each other, crossing paths and missing each other till they finally united as the Eroica Trio.

Parkins is a fan of a quieter life, a more relaxed lifestyle and lives in Los Angeles, while Sara and Erica live in NYC.

Before we left for the night, a student came up to them and handed them a card with a heartfelt note. The student had been present in a class with them earlier that day. They were touched, talking about how rarely this happens. The student had found a connection with a piece they were playing.

The Trio said they had connected with the audience and found that giving context to the pieces before they played helped people experience the music the way they did.

As an individual who can only appreciate music from the passive seat of concert hall, I let them know I appreciated the context deeply. It gave my experience as the listener more depth otherwise.

As the night wore on and the tired students and staff left, I said goodbye, giving the Italian Sara Sant’Ambrogio, a customary Spanish ‘dos besos.’ I learned that they had travelled to the very same Basque country I had been in a few months ago and dined with one of the most famous chefs in the world, (he was a fan). Sara didn’t want to use their fame to get the table at the restaurant so Erica made the call, having no qualms about using their perks for a delicious 15-course meal. I would’ve done the same, I laughed.

We said our reluctant goodbyes and on the walk back home, I quietly marveled at how humble and graceful the Eroica Trio had been, infinitely grateful for the opportunity to have listened to their story and been moved by their haunting music, thanks to the Vail Series. We can’t wait for them to be back!