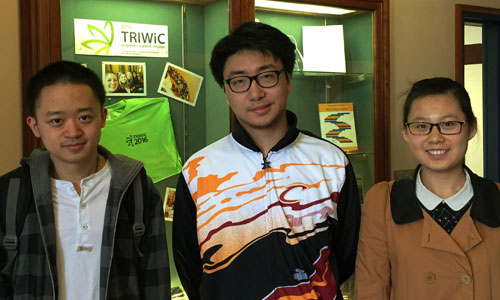 Ever year Denison University, Kenyon College, Ohio Wesleyan University and Wittenberg University get together on the second Saturday in February for the 4 College Math Contest. The students work together in teams on cool, challenging math problems. The Math & Computer Science department is thrilled to announce that Denison’s team of Junbo (Larry) Li, Jiacheng (Diego) Miao, and Wanyi (Holly) Huo (pictured above) finished second out of the eight teams that participated. Team ePotential, as they called themselves, showed a lot of creativity and ability to work together on some really out of the box problems.

The first place team, and winners of $200, consisted of Khanh Le and Lan Nguyen from Ohio Wesleyan University.