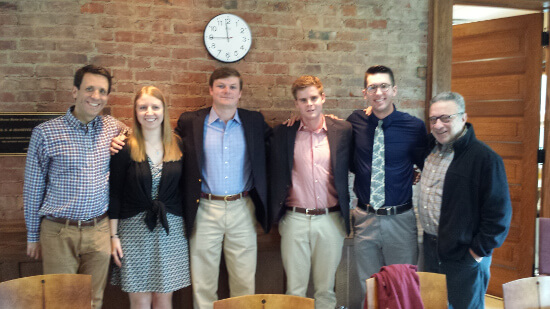 For their senior capstone experience, our history majors can choose to do a year-long independent research project that culminates in a 60-100 page thesis and an oral presentation to the history faculty and students. Throughout the year, these independent researchers each work closely with a faculty adviser as they select and refine their topics, craft research questions, locate and analyze their sources, construct their arguments, and draft and revise their papers. On May 3, this year's four independent researchers presented their final projects to the department. We are delighted to celebrate their accomplishments!

“The Ideals of Female Sanctity in Merovingian and Carolingian Vitae.”

My project explored the ways that the presentation of female sanctity in the vitae (saints’ biographies) of the early Middle Ages was dependent upon the sociopolitical context at the time of writing. The hagiographies of female Merovingian saints Genovefa of Paris and Radegund of Poitiers presented these saints as self-limiting, pious ascetics working tirelessly to reject the weakness of the female body, who nonetheless wielded spiritual power great enough to work large public miracles and secular political power extensive enough to control cities and influence the ruling party. In contrast, the hagiographies of female Carolingian saints Liutbirga of Wendhausen and Hathumoda of Gandersheim present their subjects as conforming to Carolingian order and structure—they did not participate in the politics of the region or perform large miracles, but rather presented their sanctity as introspective, deeply personal pious ascetics. The shift in the ideals of female sanct ity between the Merovingian and Carolingian eras represent changing ideals in the sociopolitical context of the two eras; in the relative chaos of the Merovingian era, saints needed to provide a powerful example of the Church’s might, but in the highly ordered Carolingian empire, saints were expected to show obedience to the structure of Church and society. The Carolingian-era Life of the Merovingian saint Clothild provides an example of the importance of these ideals, as the text presents Clothild’s achievements in the context of Carolingian expectations of sanctity instead of the Merovingian expectations of sanctity that she would actually have experienced during her life.

“An Intimate Fellowship? Muslim-Christian Encounters in the Crusading Levant”

I researched social and cultural encounters between Muslims and Christians during the Crusading Movement (1095–1291 CE). The goal of my study was to gain a greater understanding of how Muslims and Christians interacted with one another in everyday life situations and how their viewpoints of one another varied. My thesis consisted of multiple case studies from both Muslim and Christian authors who traveled through the eastern Mediterranean region known as the Levant. What I came to realize at the end of this project is that medieval mindsets were not as different from today’s as we often think, and that the struggles and fears of understanding one another has been a consistent theme throughout history.

For my senior thesis, I studied the Market Revolution in Cincinnati. The Market Revolution marked the shift from an agrarian society to a capitalist one. This caused major social, economic, and political changes throughout the country. Using Cincinnati as a case study, I focused especially on newspaper articles as my primary sources in order to examine how shifts in the economy and changes in the political activities of workers shaped notions of democracy developed during this time. Specifically, I researched how political parties formulated their ideologies to fit in to the evolving market system.

“The Public Memory of Robert E. Lee in the New South”

My project analyzed the historical memories constructed by the South from the end of the Civil War until World War I, focusing on the creation of the image of Confederate General Robert E. Lee as the hero of the War and the embodiment of Southern virtues. More specifically, I examined the set of beliefs known as the “Lost Cause” which justified the causes of the war and attempted to preserve the antebellum traditions of the South by insisting that states rights were a more fundamental issue in the conflict than slavery. The heroic image of Lee was exaggerated by Lost Cause enthusiasts in order to symbolize the morals and honor of the South. My paper examines what we actually know about Lee's Civil War service, analyzes the Lost Cause, and then evaluates how the Lost Cause and its followers narrated Lee's life for their own purposes.