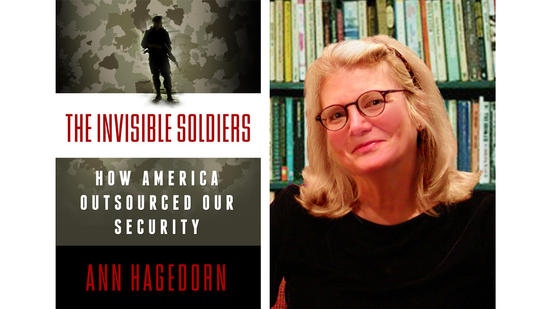 Journalist and author Ann Hagedorn ‘71 has just published her fifth book, “The Invisible Soldier,” about the private security industry.

The LA Times recently reviewed the book, saying “Near the end of “The Invisible Soldiers: How America Outsourced Our Security,” author Ann Hagedorn recommends that President Dwight D. Eisenhower’s famous warning in 1961 about the rise of the “military-industrial complex” should be updated.

“The strength of ‘Invisible Soldiers’ is the impressive depth of Hagedorn’s reporting: copious interviews, generous use of sources, and a compelling narrative.

“Soldiers for hire have long existed. But the wars in Iraq and Afghanistan accelerated the transformation of mercenaries “from covert and infamous to acceptable and indispensable,” Hagedorn writes. The best known of the private military and security companies is Blackwater, now renamed after a spate of bad publicity, but there are others, seemingly thousands of them, with contracts from the U.S. worth billions of dollars. Many are based in the U.S., others are foreign owned and have an international approach, finding clients wherever possible.

“Largely outside of public view, these private, for-profit companies perform the security, logistics, intelligence and other duties that a uniformed military force might be expected to provide. Half of the 16,000 personnel working for the U.S. Embassy in Baghdad since the withdrawal of U.S. combat troops are contractors, Hagedorn reports.

“The strength of “Invisible Soldiers” is the impressive depth of Hagedorn’s reporting: copious interviews, generous use of sources, and a compelling narrative that focuses on people caught in the crossfire, notably Kadhim Alkanani, an Iraqi immigrant who joined the U.S. Special Forces and returned to Iraq to show his loyalty to his new country, only to be mistakenly shot by a U.S. contractor.”