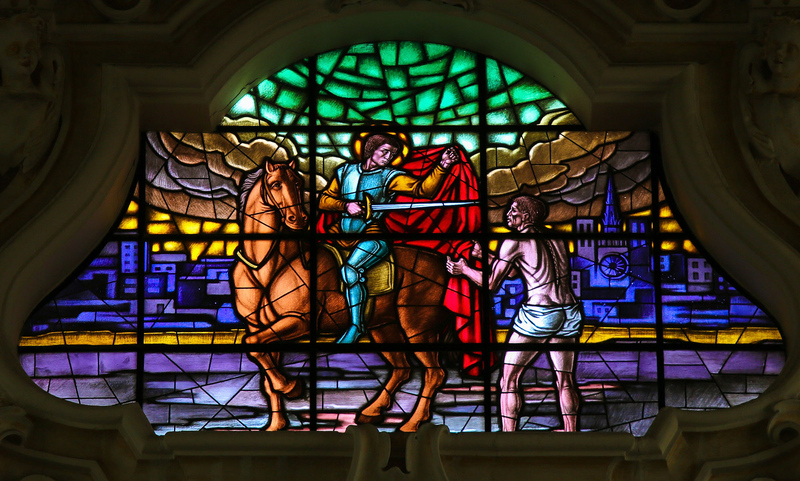 St. Martin of Tours giving his cloak to a beggar.

Fresh from a year of research at Cambridge University as a Visiting Fellow at Clare Hall, Professor Adam Davis shares some of his work on the underlying tension beneath the concept of anonymous giving in medieval times.

In a HistPhil blog, Davis writes,

“During the first millennium and a half of Christian history, there was a fundamental tension between the ideal of anonymous charity on the one hand, which by definition was not done out of vainglory, and on the other hand the allure of public almsdeeds, which offered an example for others to emulate. In his Sermon on the Mount, Jesus warned his disciples not to do good works in order to win the acclaim of others. “Otherwise,” he told his disciples, “you shall not have a reward of your Father who is in heaven. Therefore when thou dost an almsdeed, sound not a trumpet before thee…But when thou dost alms, let not thy left hand know what thy right hand doth. That thy alms may be in secret, and thy Father who seeth in secret will repay thee” (Mt 6:2-4). Here, Jesus articulated a clear preference for anonymous charitable giving, which, he reassured his listeners, would still be visible to God and would earn the giver divine recompense. Earlier, however, Jesus had instructed his disciples to “let your light shine before men so that they might see your good works and glorify your Father in heaven” (Mt 5:16). How did medieval Christians reconcile these two competing ideals found in the New Testament, of doing good works anonymously and doing them publicly?

“Some medieval Christian authors picked up on Jesus’ assertion that alms were useless if given merely to win human favor. The 8th-century English scholar, Alcuin of York, who worked at the court of Charlemagne, warned ‘the one who does good only in order to be praised by people, has that as the reward which he seeks and no hope of recompense from God, since he did it not for love of God, but for the empty boasting of human praise.’ Christian scholastics in the 12th and 13th centuries likewise placed emphasis on the motivations behind almsgiving, arguing that one’s piety in giving mattered far more than the amount given.

“Yet in general, medieval Christian theologians devoted relatively little discussion to anonymous giving for two reasons. First, at the heart of the long tradition of Christian hagiography—writing about saints’ lives—was the promotion of a saint’s holy conduct. To be made a saint, one first had to earn a reputation for sanctity, and this often involved acts of benevolence. To be sure, some medieval hagiographies depicted saints doing charitable works in secret, thereby underlining the saint’s humility and pure intentions. But medieval religious culture celebrated acts of generosity and the making of personal sacrifices for others as a way of valorizing these pious and Christ-like examples. Almsdeeds done in secret would not have received the public recognition that this religious culture wished to bestow on such deeds, and above all, on the doers of such deeds. Second, for over a millennium, Christians made charitable gifts to churches, monasteries and to the poor with the hope that their good deeds would earn them spiritual redemption and salvation. Although much of the almsgiving during the Middle Ages was never recorded (with collection boxes in churches, for example), other gifts were made essentially in exchange for the intercessory prayers of monks, nuns, and the clergy, and this required monasteries and churches to keep detailed records of donors and their donations, with the dates of donors’ deaths recorded so that anniversary masses could be said for their souls and those of their relatives. The salvation of these souls, in other words, required commemorating givers and their gifts. Almsgiving also often served as a form of public penance. In some ways, the role of good works in the medieval Christian soteriological system posed a fundamental challenge to the desirability or even possibility of anonymous giving. In the later Protestant context, where no human works, including charity, were thought to affect a person’s spiritual salvation, anonymous giving could acquire a different status.

“Not all medieval gift-giving or patronage, of course, was done merely with the hope of earning spiritual benefits. Many donors hoped to reap social and political benefits from making gifts. Wealthy donors to churches had their heraldic arms or even their own likenesses visually represented in church paintings and sculptures. Those who commissioned books of hours, popular devotional books that were often illuminated, at times had the illuminator depict them with a saint or Christ. In 1405, a candidate to be archbishop of York, who had almost become archbishop once before, gave a window in the cathedral as part of his campaign to secure the high office. In addition to depicting ancient and mythological kings and various historical figures from York, the window depicted the donor’s coat of arms and the donor himself, kneeling before Christ the Judge. These medieval visual representations of gift-givers seemed to be the very antithesis of the ethic of anonymous giving articulated by Jesus in the Sermon on the Mount.

“The medieval Jewish and Islamic traditions were less ambiguous in their embrace of the ideal of anonymous charitable giving. The Talmud—the quintessential work of rabbinic Judaism—discussed different gradations of charitable giving, and placed double-blind charitable transactions, in which neither the giver nor the receiver knew each other’s identity, as the highest form of giving, a point that was reaffirmed by the twelfth-century Jewish sage Maimonides in his Mishneh Torah. Maimonides viewed doubly anonymous giving as a way of preserving the dignity of the receiving poor person while also ensuring that the giver made a gift with the purest of intentions. We know from medieval Jewish manuscripts found in the Cairo Genizah that anonymous giving was not just an ideal, but a common practice among the medieval Jewish communities of the eastern Mediterranean and north Africa. Lists of Jewish donors from the 14th century, for example, included gifts made by those who wished not to be named, who were instead referred to simply as ‘mattan’ (gift), alluding to a verse in Proverbs 21.14, ‘a gift in secret averts anger.’ This biblical verse was also frequently quoted in letters of appeal from Jews to their would-be benefactors.

“Secret giving was also embedded in the Islamic ethics of charity. The Quran praised anonymous giving: ‘If you disclose your Sadaqaat (almsgiving), it is well; but if you conceal them and give them to the poor, that is better for you.’ [Quran 2:271] According to one of the hadiths (Sahih Muslim, Hadith 2248), among the seven whom Allah will shade in his shade is ‘a man who gives in charity and hides it, such that his left hand does not know what his right hand gives in charity.’ Further, according to one of the Prophet’s companions, the Prophet said: ‘Allah loves the God-fearing rich man [who gives much in charity but still] remains obscure and uncelebrated.’ (Sahih Muslim) When the Muslim warrior Saladin was faced with an advancing crusader army, he was reportedly told by one of his advisors that the best way to avert danger was to distribute charity in secret. Although there are rarely records of secret charitable giving, some late medieval Arabic sources identified Muslims known for having given secretly during their lifetimes, which was thought to demonstrate their piety and humility.

“Anonymous charity was clearly a religious ideal for the three major monotheistic religious traditions during the Middle Ages. There was a tension, however, particularly within medieval Christianity, between the desirability to showcase exemplary moral conduct, on the one hand, which it was hoped would serve as an inspiration to others, and the religious ideal of humility, on the other hand, which seemed to require that pious giving and charitable service be done in secret. While the association between Christian charity and private or anonymous giving was rooted in an ancient ideal, as a social practice it was largely the product of later historical developments.”

Read the full article in HistPhil